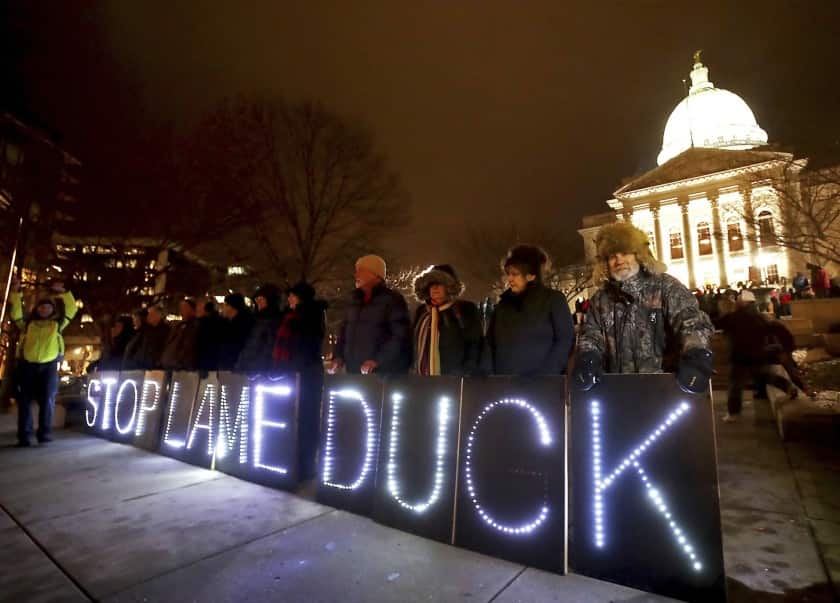 The NRA convention’s coming to Nashville, Tenn. this weekend and the state’s pro-gun Republicans are eager to please. But that still doesn’t explain why Tennessee’s GOP-run House and Senate just passed a law that bans toy guns within 150 feet of schools, but still allows real ones.

MaddowBlog reports HB 0995 seeks to override local bans on guns in and around parks and schools, while bizarrely banning toy guns.

The Tennessee House of Representatives passed a bill Monday night that makes it illegal to take a squirt gun – but not a real gun – within 150 feet of a school. The new ban was included in a larger bill that would nix any local laws prohibiting people with gun permits from taking guns to parks.
The Tennessean adds that on April 1, the State Senate passed the “Guns in the Park” bill with an amendment that removes the ban on guns in and around the state capitol, where all these lawmakers work. Stranger, still, that amendment was the Democrats‘ idea. And no, this was not an April Fool’s prank.

Blame “Gun Week” And The “Radnor Lake Rambo.”
How did this this bizarre ban on toy guns while overriding bans on real guns even happen? On her April 9 show, Rachel Maddow explains it all started with “gun week.” Tennessee’s GOP lawmakers were so excited about the NRA convention coming to Nashville (April 10-12), they wanted to hand the NRA a nice big present: Some serious pro-gun legislation.

But what can you do when your state is already pretty much “anything goes” when it comes to guns? Override local city and town ordinances banning guns in schools and parks. The tiny minority of Democrats in the House couldn’t fight the bill, so they called their GOP colleagues’ bluff: They proposed an amendment that would also override the ban on guns in and around the capitol building. After all, what’s sauce for the goose is sauce for the gander. Unfortunately, as explained by The Tennessean, the Democrats’ poison-pill made it through the state Senate, so now they have to swallow it.

To further complicate things, there’s 42-year-old Leonard Embody, also known as “The Lake Radnor Rambo.” The open carry activist walks around Nashville with his bullet proof vest and his assault rifle and hands out gun rights pamphlets to folks who haven’t already run away screaming. Maddow explains a discussion on “The Lake Radnor Rambo” somehow led to the ban on toy guns. That makes no sense whatsoever, so we have to take her at her word.

“It’s a ban on fake guns, toy guns, things like squirt guns would be banned specifically anywhere near Tennessee schools. No squirt guns, no fake guns within 150 feet of Tennessee schools.”
Maddow continues:
“Real guns are still OK. But squirt guns and toy guns would be illegal outside of schools under the new law. The ostensible reason for this new language was to respond to the Radnor Lake Rambo guy. The Tennessean newspaper helpfully points out that that guy is actually carrying real guns, so he’d still be OK to keep doing what he’s doing under the new law. But if your personal plan to stop that guy was to sully his bullet proof vest with a squirt from your super soaker, you would be the Tennessee gun criminal now, not him.”
Hopefully, Tenn. Gov. Bill Haslam will veto the bill instead of signing it…though he’ll probably wait until after the NRA convention to do it.