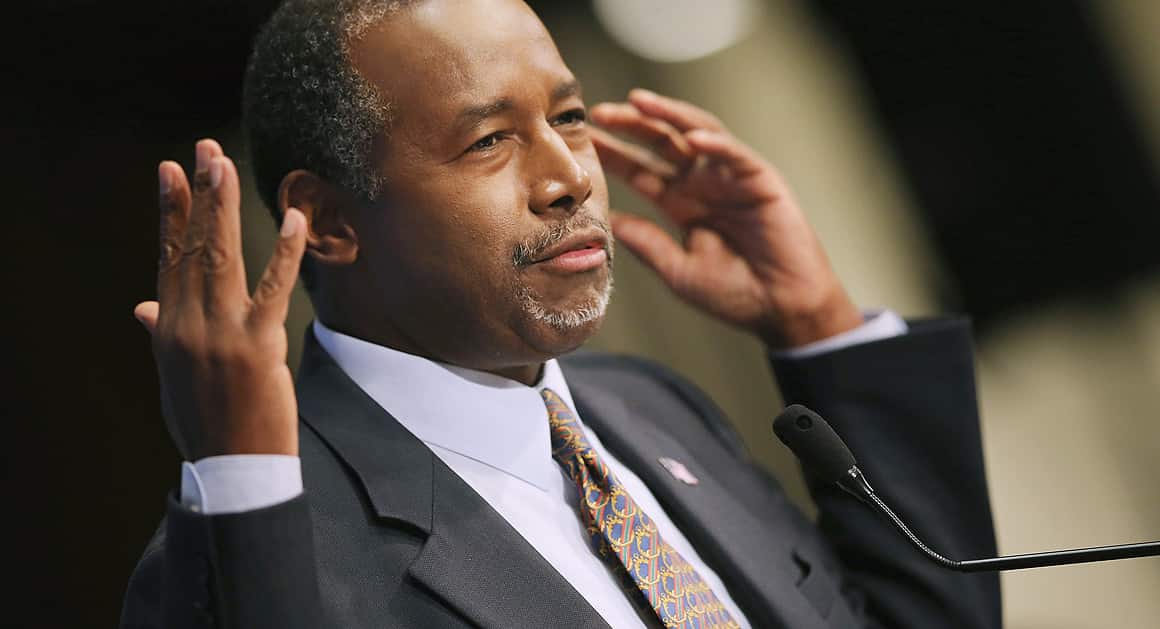 Republican presidential candidate Ben Carson was supposed to be the avatar of change on the political right. Carson was touted as the conservative black messiah who could resurrect the GOP as Barack Obama energized the Democratic party back in 2008. Finally, that “outreach”initiativewould make headway. And finally, this majority-white party would become a little more colorful.

Ben Carson Smears The Left While Making Himself Look Like A Raving Lunatic.

Let’s just say that “outreach” initiative was put on life support the minute Ben Carson started talking about “his politics.” Here are just 12 of his most insane quotes.

1. At the Value Voters Summit in 2013 Carson compared Obamacare to slavery, saying:

“I have to tell you – you know, ObamaCare is really, I think, the worst thing that has happened in this nation since slavery. And it is, in a way – it is slavery, in a way, because (audience cheers and applauds) – because it is making all of us subservient to the government.”

2. In March 2013, Ben Carson told Fox’s Sean Hannity that marriage should be restricted to:

“One man and one woman.”

“We have something that’s worked just fine for thousands of years to create a nurturing environment for raising children, and I think that’s where we ought to leave it.”

“Because a lot of people who go into prison go into prison straight — and when they come out, they’re gay. So, did something happen while they were in there? Ask yourself that question.”

For a man that has studied the functionality of the brain for a living, this comment was spectacularly daunting, considering Ben Carson provided no facts to back his claim. Here’s what American Psychological Association has to say about sexual orientation:

“There is no consensus among scientists about the exact reasons that an individual develops a heterosexual, bisexual, gay or lesbian orientation. Although much research has examined the possible genetic, hormonal, developmental, social and cultural influences on sexual orientation, no findings have emerged that permit scientists to conclude that sexual orientation is determined by any particular factor or factors. Many think that nature and nurture both play complex roles; most people experience little or no sense of choice about their sexual orientation.”

“If in fact we continue to have all these decrees being made the way they’re being made, if in fact we don’t fight the kind of war that needs to be fought in order to really put an end to the threat that is brought on by ISIS, if we continue along a pathway of financial irresponsibility, if we continue along a path of envy, greed, and hatred — what happened with Occupy Wall Street will be a cakewalk compared to what will begin to happen in this country.”

“If you’re gonna have rules for war, you should just have a rule that says no war,” adding. “Other than that, we have to win.”

“I think some people have that as a way of life,” and “perhaps some of the things that are going on right now which could be easily remedied are not being remedied in order to keep the economy depressed because there would be no appetite for many of the social programs if people were doing well.”

7. In his book A More Perfect Union, Ben Carson stated Jewish people could have stopped Hitler had they had access to guns:

“I think the likelihood of Hitler being able to accomplish his goals would have been greatly diminished if the people had been armed,” Carson said. “There’s a reason these dictatorial people take the guns first.”