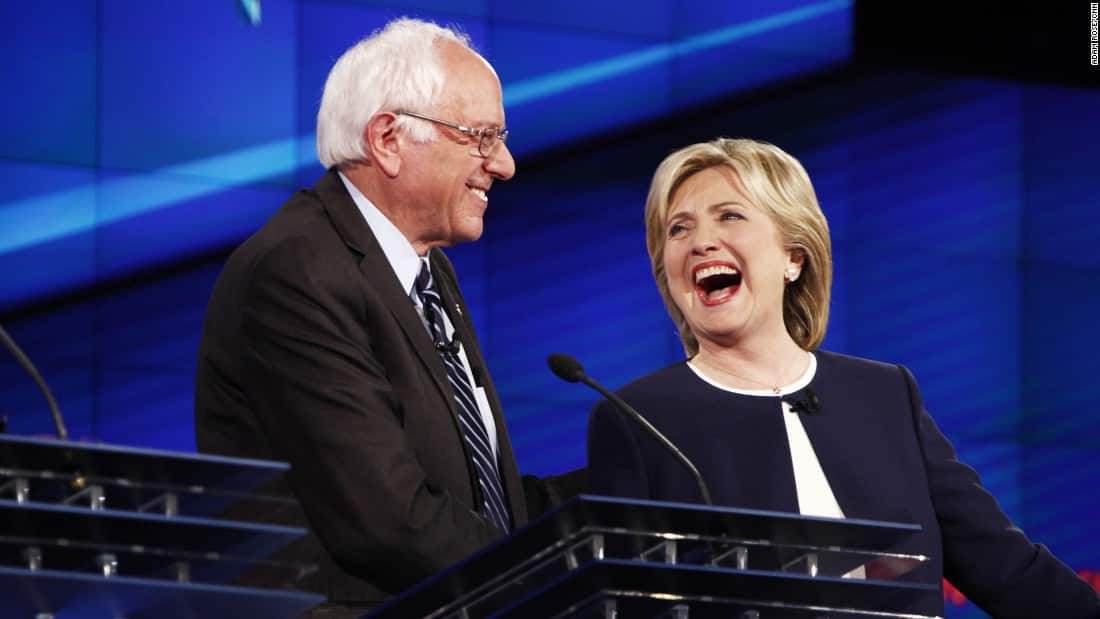 For the past few days, news organizations and liberal blogs alike have reported on the contention between Hillary Clinton and Bernie Sanders over Clinton’s alleged links to Big Oil. Fact checkers appeared to work overtime figuring out what was really going on. What they seem to have missed, though, is the Bernie Sanders fracking connection.

Although Bernie Sanders has railed on Hillary Clinton’s Wall Street connections, the Vermont senator does have his own Wall Street investments. This in itself is not a huge concern. After all, we do live in a system where investing for retirement means having assets that include stocks, bonds and mutual funds. One mutual fund, however, stood out among the rest.

Twitter user Smooth Kobra (@smoothkobra) wasn’t looking for a Bernie Sanders fracking connection when he decided to investigate the senator’s assets. He simply visited OpenSecrets to see what assets Sanders had in his portfolio. As seen in the screenshot below, he came across the VALIC Aggressive Growth Fund.

One look at the assets of Bernie Sanders show that his holdings are homely – to say the least – compared to some of his fellow senators. But when we look at VALIC, we see their fourth largest holding is VALIC Company II Mid Cap Value.

VALIC is a company that specializes in retirement plans, and “Mid Cap Value” doesn’t sound too ominous, right? When you look up the company’s fund, however, you’ll see that its second largest holding is Diamondback Energy Inc.

It’s quite another thing, however, to actively invest in mutual funds that benefit from the exploitation and degradation of Earth’s natural resources. In fact, NASDAQ posted an article which showed the real dangers of Diamondback Energy’s fracking practices in Texas.

“Texas has always been exceptionally friendly to drillers. In recent months, though, critics have cited fracking as the cause of unusual earthquake activity in the northern part of the state. But such anti-fracking sentiment has not penetrated to the Permian.”

Anti-fracking sentiment hasn’t penetrated the area known as the Permian Basin, so that’s exactly where Diamondback Energy Inc. drills. This Bernie Sanders fracking connection is surprising considering the senator claims to be a champion of environmental issues. It’s even more surprising considering his recent attacks on Clinton for receiving money from employees of Big Oil – which he also receives.

Of course, we could simply assume that Bernie Sanders doesn’t know VALIC’s connection to hydraulic fracturing. Of course, this didn’t matter four years ago after discovering John Boehner’s investments when the Keystone Pipeline debate had reached a peak.

“Revelations this past week from his financial disclosure forms that John Boehner invested $10,000 to $50,000 each in seven firms that had a stake in Canada’s oil sands should raise red flags for the House Oversight Committee; especially in light of Boehner’s push to grant a permit for the Keystone XL pipeline…”

At the time, liberals went nuts over the conflict of interest, but these are the same types of investments Bernie has with fracking. This leaves us to wonder why the senator has refused to release his last 8 years of tax returns. His most recent stated reason for not releasing the returns was “My wife does our tax returns” and that they’ve been busy.

In the world of politics, however, appearances are everything. It’s not beyond belief that the Bernie Sanders fracking connection is just an oversight on the senator’s part. His refusal to release his tax returns, however, casts the issue in a more ominous light. And if nothing else, someone in Sanders’ position should pay attention to these nuances.

Hopefully, the senator will pull his investments from the hydraulic fracturing industry. It makes zero sense to decry the destruction of Earth while simultaneously making money — regardless of how little — off of it. If he drops this investment and releases his tax returns, the entire Bernie Sanders fracking connection may simply vanish as an embarrassing oversight. If not, there may be bigger questions at hand.

Everything You Need To Know About The Panama Papers Data Leak