Bernie Sanders Is Winning The Internet 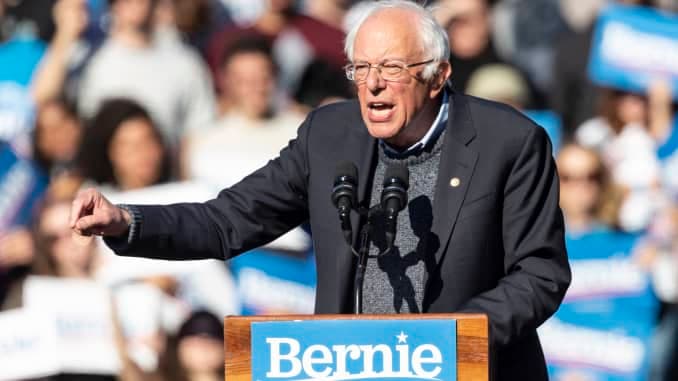 Bernie Sanders, the avowed “socialist” (as in the Scandinavian style Democratic Socialists – you know, the people responsible for the happiest, healthiest, most successful countries on Earth) Independent Senator who has long caucused with the Democrats, is now running for the Democratic Party’s nomination to be their candidate for President – and is very much winning the internet. Yes, Bernie gets lots of likes on Facebook. He gets tweeted like mad. Reddit loves upvoting anything Bernie Sanders. It’s official: Bernie Sanders might be getting less buzz than Hillary Clinton in the mainstream media, but in cyber space, he’s electic!

Everyone and their uncle knows that it’s Hillary’s turn, again, and that this time she’s almost certain to get the nomination. And she’d make one helluva a President too. Not nearly as progressive a President as Sanders would be, of course, but a helluva lot more progressive than another Bush, or any Republican, even a libertarian like Rand Paul. So why is Sanders running?

Because Bernie Sanders is in a unique position: the position to just tell the truth. He’s not beholden to billionaires. He’s not a pawn of Wall Street. He’s not even a Democrat, or part of the two party system, not really. And he’s running in a year when it’s pretty clear who’s probably going to get the nomination. Put all the pieces together and the puzzle solves itself: Bernie Sanders has nothing to fear.

He calls himself a Socialist, so he doesn’t need to worry that Fox News will. He’s not pandering to corporations, so he doesn’t need to pretend that they are, preposterously, people. He doesn’t even really worry if his hair is all over the place. He’s for full single payer healthcare, so he’s not going to care if he’s accused of supporting Obamacare. He thinks the people with way more money than they need shouldn’t be the ones getting all the breaks at tax time. In fact, he thinks they should be paying and paying plenty. So he’s not concerned with being branded with the old “tax & spend” canard.

All this truth telling in a political season is refreshing to a lot of people, and among other things it’s forcing a change in the conversation. In a way, Bernie Sanders is picking up where Occupy Wall Street left off. He’s forcing the candidates of the establishment – in both parties – to once again reckon with the rhetoric of reality. He’s forcing the 99% back into the spotlight. And in that regard, Bernie Sanders may be having a hard time being taken seriously by some in the beltway press, but he’s not just part of this conversation – he’s setting the tone. Because he’s not trying to win, he’s trying to tell the truth, and hoping it’ll be contagious.

It’s really this simple… Bernie Sanders just has no f*cks to give. He’s just gonna call ’em how he sees ’em. And that just might make him unstoppable.