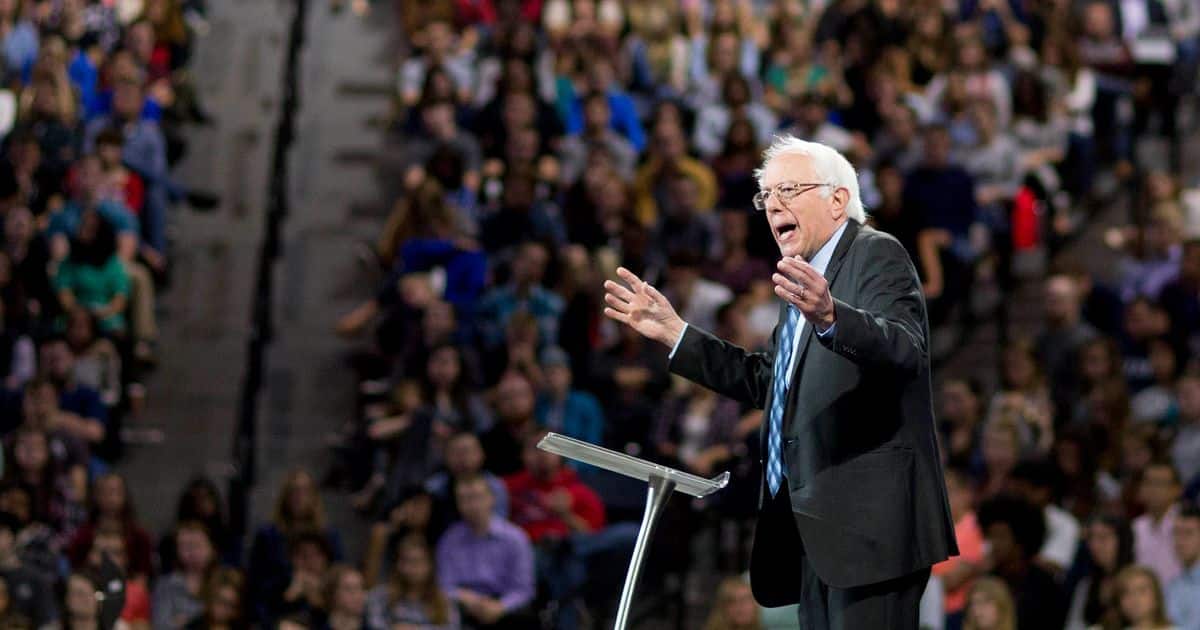 When Bernie Sanders gave a speech at Liberty University on Monday morning, he was hoping to initiate a “civil discourse.” He has done far more than that. He inspired an evangelical pastor and counselor who was in the audience to write a sermon saying that because he stands with Jesus, he also stands with Bernie Sanders.

The evangelical’s name is Jim. He posted the sermon on Reddit and, because of the overwhelming response, issued an audio explanation of the Biblical argument that shows how he can be both an Evangelical conservative and a Bernie Sanders supporter. Jim’s most powerful statement lies in his comparison of Sanders to a Biblical figure:

“When I saw that guy on stage at Liberty University, I saw John the Baptist. I saw the wild-haired, roughly-clothed John the Baptist, eating honey and wearing camel’s hair, and crying out to the religious leaders, the Pharisees of his day, calling them corrupt and complicit with those who have all the power and all the money and all the wealth, and for abandoning the people that God loves, that God cares about…

“That’s the wild-haired Jew that I saw up on that stage. I saw, and felt, the same voice coming from the Bible when I read about John the Baptist…”

Never mind that Sanders began his speech pointing out that he supports a woman’s right to choose, to have control over her own body, as well as supporting gay rights. Jim criticizes evangelicals who would have others believe that what Jesus cared about most was those issues. He said:

There is one thing — one major thing — that Jesus did care about. The Jewish John the Baptist cried out in the desert to warn the Pharisees that a “messenger” was coming to “bring equity and justice to the poor, and to the weak.” The poor, the powerless, the “least of these” — that was the concern of Jesus.

An Evangelical Is Better At Making The Biblical Argument

Many liberals have tried, often fruitlessly, to point out to the religious right that they have strayed far from the path, and the words, of Jesus. To have an evangelical pastor bluntly confront them with Jesus’ own words and to equate that with Bernie Sanders’ words is beyond powerful. It’s mind-blowing.

The reason Jim is able to speak out is that he’s a graduate of Liberty University, not a current student. The school has an honor code that could mean expulsion for a student who supports or speaks in favor of a candidate who holds positions that are contrary to conservative doctrine.

Jim, however, proclaims himself to be both a religious conservative who believes the Bible is truth and a political progressive — a position he has recently come to. In 2004, he worked for the George W. Bush campaign. In his words:

“I believe that my views are 100% consistent. And so I think that the shock value for that comes in beginning to appreciate that the Bible and Jesus, in my opinion and in my very moderate reading of the Bible and the words of Christ, leads us to a Progressive worldview.”

The words of Jesus resonate for Jim in the words of Bernie Sanders. He quotes Jesus from the Book of Luke:

“I have come to bring Gospel—good news—to the poor.”

Evangelical Leaders Have Been Called Out

Those were the words he had in mind when he listened to Sanders on stage, calling out evangelical leaders, including at the university, for abandoning the poor. It was a transformative moment for Jim:

“And lightning hit my heart in that moment. And I realized that we are Evangelical Christians, that we believe the Bible. We believe in Jesus…  And yet somehow, we commit to the mental gymnastics necessary that allows us to abandon ‘the least of these,’ to abandon the poor, to abandon the immigrants, to abandon those who are in prison.

The wonder for the rest of us may be that it has taken so long for an evangelical to come to this moment, to realize that the poor, the sick, the homeless are the true mission of Christianity and of any other belief system that claims a compassionate heart. But those layers of defense, those ‘mental gymnastics’ that the faithful have labored under for years are heavy and thick. It’s no wonder, after all the reinforcement from their so-called ‘leaders’, that the light of realization has failed to penetrate.

This kind of breakthrough and willingness to speak out are not only invaluable, but demonstrate the ability of Bernie Sanders to draw together a diverse base of support. That base has one thing in common. Religious or not, its members have heart, and compassion, and want the country to be a better, loving, forgiving place.

Jim got right to the heart of it for Christians:

Accidental perhaps, but liberals as a result of their faith. It’s a concept whose time has come.