This Is The Biggest Threat From A Trump Presidency, And We Need To Start Preparing For It 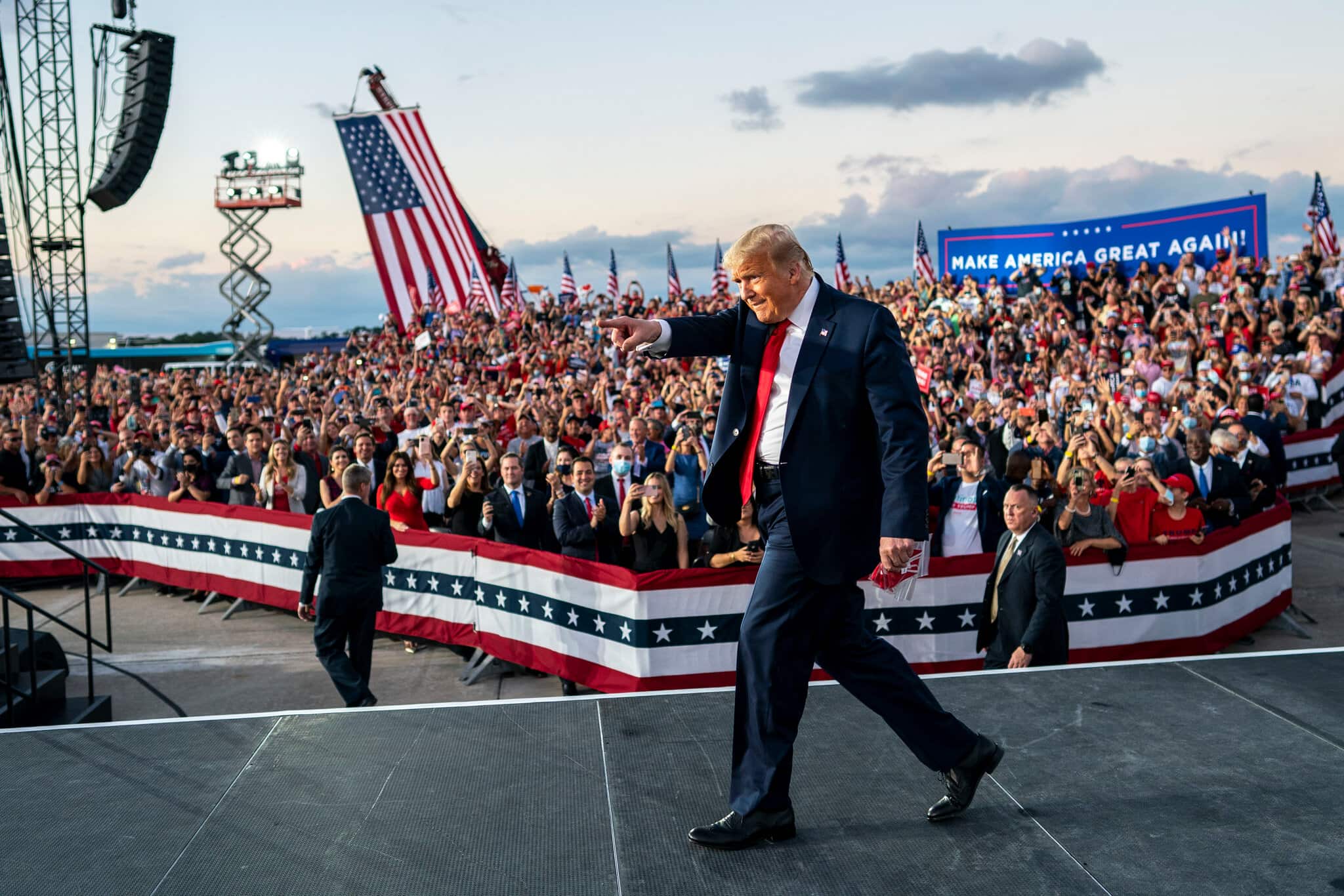 Trump’s Existential Threat To Our Democracy

Everything I’m about to tell you I hope is wrong. I fervently hope that, years from now, someone will rub this article in my face and tell me, “See! You were so wrong!” And I will tell them, “Hooray! I was wrong about that!” But the way President-elect Donald Trump’s campaign, election, incoming administration and the dominant Republican party have set the board for at least the next two years, I fear that our democracy could spiral into a worst case scenario very quickly. The threat is so dire that I’m willing to go way out on a limb to sound the alarm. Based on what we know, this is what I believe is the biggest threat from a Trump administration.

As I write this, the Electoral College is voting, and there’s no evidence of a large revolt, so Trump is almost certainly going to be inaugurated on January 20th. He will come into office under a cloud of illegitimacy. Due to Russia’s interference in the election and his historic loss in the popular vote, Trump will have less public support than any incoming president in memory.

George W. Bush also came into office in 2001 under a cloud of legitimacy questions. His loss in the popular vote, the dragged out struggle for Florida’s electoral votes and the Supreme Court intervention handed Bush the presidency. Despite this, the Republican party won a net gain of seats in Congress in the 2002 midterm elections.

We all know why that happened, of course. Bush came into office with a 50% approval rating. After the September 11th, 2001 attacks, his approval rating shot up to 90%, a remarkable high. The shock of the attack created political consensus. The Bush administration was given free rein to mold the moment and the nation’s response to it. Political resistance in Congress was virtually nonexistent. The mainstream corporate media was totally compliant to the White House’s response and helped whip up popular nationalism and militarism. Voices of dissent were pooh-poohed and quickly drowned out. Those who persisted were called unpatriotic and even attacked, intimidated and censored, including Ambassador Joe Wilson and the Dixie Chicks. In the 2002 election, Bush still had approval ratings in the high 60% range. Republicans were able to buck history, claim a sweeping mandate and grow their control of Washington. Dissent against Bush’s response to 9/11 was not able to find a mainstream political footing until 2005 as civil war ripped Iraq apart and Bush’s approval rating dipped below 50% for the first time. Opposition didn’t gain tangible power until Democrats were sworn into office in January, 2007, following their big win in the 2006 election. Bush’s agenda dominated the political landscape for 6 years because of the 9/11 attacks.

Trump will come into power under a bigger cloud than Bush. Although the Bush administration was imperialistic, brutal and corporatist, Trump is less patriotic than even Bush and the neocons, and is much less constrained by the traditions of our republic and political norms. His proposed Cabinet is a pack of jackals: militarists, corporate raiders, unqualified and unaccountable people who want to gut public programs and civil rights for private gain. Hovering over all of it is the stench of loyalty to Russia, a hostile foreign power.

I fear that the Trump administration will take the Bush administration as a lesson in how to overcome questions of legitimacy, claim a huge mandate and silence dissent. I see four possible ways that what I deeply fear could play out.

First, of course, is the possibility of another big terrorist attack. US intelligence concluded that al Qaeda had originally considered attacking US nuclear power plants, for example. Trump is ignoring his intelligence briefings. Perhaps he doesn’t want to know if the US is about to be attacked? Another big terror attack could draw the US deeper into the Middle East and provide an excuse for Trump’s proposed crackdown on Muslims. Trump’s ability to get most Republican voters to believe patent falsehoods would enable him to convince them that a terror attack was ordered by any country he wants, without evidence.

Second, Trump is already haphazardly picking a fight with China. China is already demonstrating its keen displeasure about Trump’s signaling a new approach with Taiwan. Trump continues ratcheting things up. The US and China have avoided a Thucydides trap war in the South China Sea, but that is mostly through complex diplomacy. Xi Jinping has consolidated an enormous amount of power domestically in China’s political system. If Trump stumbles into confrontation with China, Xi could see it as an opening to expand China’s naval influence in the Pacific. Trump is replacing diplomats with militarists and corporate raiders who won’t shrink from a fight and won’t know how to deescalate without being humiliated.

Third, among Trump’s generals are people who have want to shred the Iran nuclear deal, and are spoiling for a fight with Iran for reasons of both ideological zealotry and corporate interest. Trump’s pick for Secretary of Defense, General James Mattis was booted from the Barack Obama administration because he tried to thwart the president’s diplomatic overtures with Tehran. Mattis is on the board of Lockheed Martin, the world’s largest weapons contractor. Trump’s pick for National Security Adviser, General Michael Flynn, insisted that Iran was involved in the 2012 militia attack on the US consulate in Benghazi. He traffics in far right, Islamophobic circles, and has referred to Islam as a “political ideology … hiding behind a religion” that is “like malignant cancer.” Josh Manning, an intelligence operative who worked under Flynn wrote in Foreign Policy that Flynn was fired for trying to peddle conspiracy theories to the White House. Manning is “genuinely fearful” “that Flynn will start laying a path for conflict or war against Iran.”

Fourth, Eastern European and Baltic NATO countries are desperately preparing for a Russian invasion. Trump has saidthat he would only defend countries that “pay what they’re supposed to be paying” for membership in NATO. This provides him a convenient rhetorical escape clause for US NATO action that would be difficult to disprove to the American people. However, if Russia attacked a country like Estonia and NATO invoked Article V, the collective defense clause, the US is legally bound to consider the attack an act of war on the US. How Trump would deal with that contradiction is an open question. A smaller country in NATO fearing a Russian invasion might try to spark a conflict with Russia quickly to force the issue before Trump could legally change America’s status in the NATO treaty. There are big elections in France and Germany in 2017. Russia will no doubt try to hijack those elections to put far right demagogues into power. For the first time, those neo-fascists are also likely to have the backing of the American president. Trump siding with Russia against moderates in European elections could force a major diplomatic crisis within the EU and NATO. Fearing extinction, European moderates might try to force the issue.

Any confrontation with China, Iran or Russia would be MUCH bigger than America’s war in Iraq. It would be an extremely dangerous situation with vast geopolitical implications, involving many powerful actors, including nuclear armed states, and totally unpredictable outcomes. Any one of them could cause a WWI-type automatic mobilization trap in which collective defense treaties are automatically triggered and wars are declared across regions or even across the globe.

Despite some of the media showing early signs of having learned some important lessons from the election, we would not be able to trust the mainstream mass media to stand up to Trump if he dragged the US into a huge conflict and was able to create the perception and/or reality that the US was under serious attack. Mainstream media would become Trump’s megaphone, amplifying the alarm. Dissenters would be attacked as traitors, or worse. Depending on the nature of the conflict, this could last for months before people began to question it. The political landscape would be defined by it for the foreseeable future.

This situation would give Trump cover to declare a state of emergency. Just as the Reichstag fire gave Hitler cover to declare a state of emergency, and just as 9/11 gave Bush cover to pass the PATRIOT Act and invade Iraq, Trump could take extreme measures with virtual impunity. These would likely be much more far reaching than the PATRIOT Act. Based on his campaign, it would likely include rounding up suspect populations, criminalizing dissent, protest and critical journalism, and riling up his base to a fever pitch. In the hysteria of the moment, Trump and the Republicans would likely be able to get away with signing measures along the lines of what North Carolina Republicans just did: overturning the will of the electorate and subverting the Constitution and making it practically impossible for Democrats to regain power.

Given how little Republicans stood up to Trump during the campaign, and the fact that they have politicized the Russian hacking, allying to a foreign despot for partisan gain while subverting US national interests, it is difficult to imagine they would stand up to Trump in this kind of situation. It could be the beginning of paranoid, kleptocratic one-party rule in the United States, based on lies, white male supremacy, corporate power, militarism and loyalty to Russian foreign policy interests. Dissent would become dangerous and gaining power in opposition could become almost impossible. It would make the Constitution a rump document, and seek to destroy the social contract and virtually all socio-economic progress since the Civil War to consolidate all power into the hands of a tiny cabal of billionaires.

We need to begin inoculating people against the hysteria that would accompany an attack on the US or a drift toward war. We need to begin pressuring both Democrats and Republicans in Congress to grill the most anti-democratic Cabinet appointments and be willing to block them. We need to pressure the media to question everything, especially if the US seems to come under attack. We need to begin preparing for the mass mobilization of peaceful protesters on an unprecedented scale. We need to be prepared to resist this kind of situation, because if Trump takes full control of the moment following an attack, we could lose everything, and find ourselves living in a sort of militarist-corporatist North Korea. By 2020, our elections could be almost meaningless, just as they are in Russia under Putin.