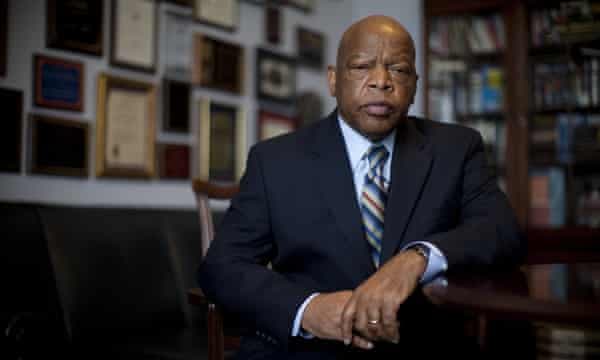 At the Congressional Black Caucus on Thursday, February 11, civil rights activist John Lewis endorsed Hillary Clinton for President. That’s great! Unfortunately, what should have been a good look for the Clinton campaign and Lewis turned into a controversial moment, and it all began with Bernie Sanders shade.

In the midst of Lewis explaining why he’s supporting Clinton’s campaign for president, he referenced the Civil Rights Movement and stated he never saw Bernie Sanders in any march, rally, or protest during this time. However, he saw the Clinton’s during this era and many times at the Democratic Leadership Council then.

“I never saw [ Bernie Sanders]. I never met him.  I was chair of the Student Nonviolent Coordinating Committee for three years, from 1963 to 1966. I was involved with the sit-ins, the Freedom Rides, the March on Washington, the march from Selma to Montgomery and directed (the) voter education project for six years. But I met Hillary Clinton. I met President (Bill) Clinton.”

One little problem, the Democratic Leadership Council, was founded in 1985. Therefore, we can categorize this as FALSE. The truth is, Lewis was attempting to discredit Senator Sanders’ activism in the black community, and instead, shined a light on the time Hillary Clinton supported the presidential campaign of Barry Goldwater, a Republican. Oops.

Turning Back The Hands Of Time. Hillary Clinton Was A Goldwater Girl.

Yes, in her heyday, Hillary Clinton was a proud young Republican for Barry Goldwater.

Her father was a lifelong Republican and Clinton always admired her father. Therefore, it was no surprise that politically she followed in his footsteps. In her memoir, Living History, Clinton further explains her journey to the conservative movement in her youth.

“I was an active Young Republican, and, later, a Goldwater girl, right down to my cowgirl outfit and straw cowboy hat emblazoned with the slogan ‘AuH2O..’ ”

My ninth-grade history teacher, Paul Carlon, was, and still is, a dedicated educator and very conservative Republican. Mr. Carlson encouraged me to read Senator Barry Goldwater’s recently published book, The Conscience of a Conservative. That inspired me to write my term paper on the American conservative movement … I liked Senator Goldwater because he was a rugged individualist who swam against the political tide.

Hillary Clinton admired Barry Goldwater as a “rugged individualist who swam against the political tide.” And while we’re on the topic of the Civil Rights Movement, here’s what Mr. Goldwater had to say about the 1964 Civil Rights Act:

“The two portions of this bill to which I have constantly and consistently voiced objections, and which are of such overriding significance that they are determinative of my vote on the entire measure, are those which would embark the Federal Government on a regulatory course of action with regard to private enterprise in the area of so-called public accommodations and in the area of employment—to be more specific, titles II and VII of the bill. I find no constitutional basis for the exercise of Federal regulatory authority in either of these areas; and I believe the attempted usurpation of such power to be a grave threat to the very essence of our basic system of government; namely, that of a constitutional republic in which 50 sovereign States have reserved to themselves and to the people those powers not specifically granted to the Central or Federal Government.”

So the current narrative is Bernie Sanders’ civil rights activism, which is well-documented, is somehow non-existent, but Clinton’s record of supporting a candidate against civil rights should have black voters rushing to the polls in droves for her.