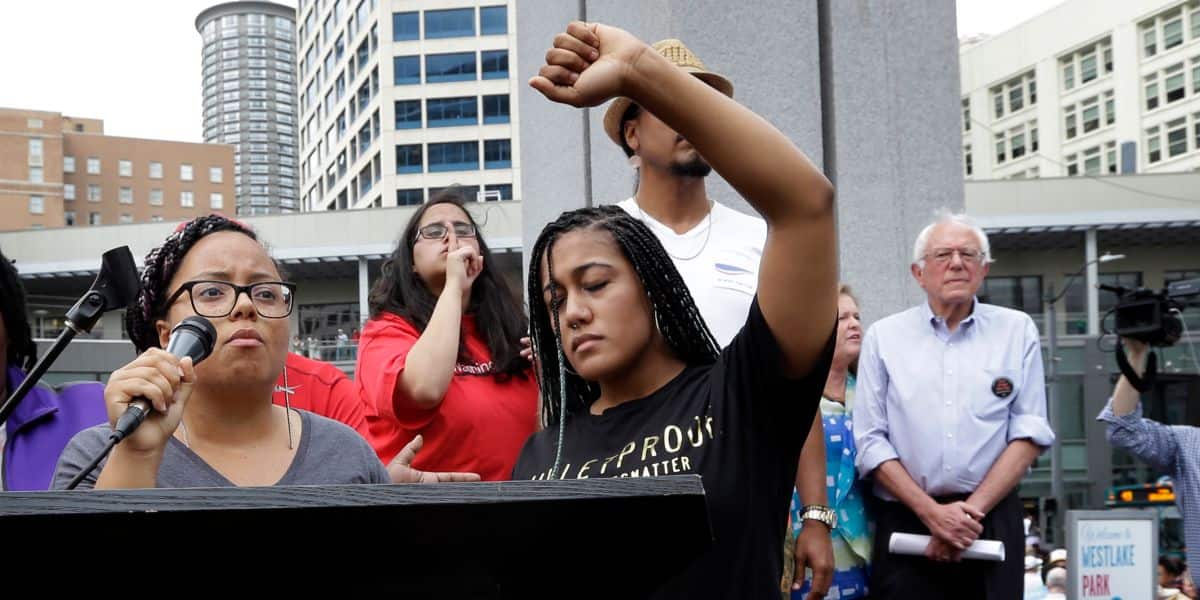 An interesting development has occurred within the Black Lives Matter movement and it has caused many outside and from within the movement to question the wisdom in the most recent interruption of Bernie Sanders campaign. While no one can deny its effectiveness, especially considering Senator Sanders newest addition to his team is a Black Lives Matter activist, this interruption happened after Bernie had already begun shifting his campaign towards publicizing his stance on racial issues.

When individuals place themselves in the public eye they become scrutinized at every level. While looking into these activists for the Black Lives Matter movement, it became readily apparent that either they were not officially a part of the BLM movement, or they were not organized until just around the time of the incident.

A pre-existing BLM_Seattle Facebook page put out a statement that initially distanced itself from the incident. The owner of that page also maintained an autonomous Twitter account that published a public apology as well.

It turns out that both the original Facebook and Twitter were being operated by a young black teenager who was adamantly supportive of the BLM movement, but not officially affiliated. She was 16 years old and later retracted both apologies, changing the names of both her accounts to Black in Seattle.

Then more startling information came out concerning Marissa Johnson, the main agitator who berated Bernie for being a racist. According to her own Facebook profile she was a huge Tea Party supporter and had supported Sarah Palin in her 2008 Vice Presidential candidacy.

While none of that necessarily qualifies her as being a troll, or as some on the internet have accused an operative who is just trying to delegitimize the Sanders campaign. It is very possible that Johnson was a staunch Tea Party supporter in 2008 and has now changed her political persuasion to more closely mirror that of Bernie Sanders or Martin O’Malley. Eight years are a long time for an individual to reflect upon politics and their effects in the real world.

Although it is quite disquieting when you dig deeper into the facts. The Facebook page and social media presence of Johnson’s faction BLM Seattle did not exist until the day of the rally. Two hours after the interruption her Facebook page had been live for less than 24 hours and had garnered less than 50 followers. Again, this may all relate back to poor planning and nothing nefarious, but it is certainly not indicative of someone attempting to achieve legitimacy within the political spectrum.

Johnson is also a member of a group called Outside Agitators 206, a movement within the larger Black Lives Matter movement, based out of Seattle. Unfortunately, they don’t appear to hold the same goals as the larger movement and actually made a public statement declaring their intent was to “declare war on the Democratic Party“. The full statement reads

To succeed, the Black Lives Matter Movement must transform the politics of Black America. By definition, that means declaring war on the Democratic Party, and forcing Black politicians and activists to choose between the Party and the people’s struggle.

As usual, the Democrats will try to make Black people more angry at the terminally racist Republican Party than at the police and local administration of their (typically) Democrat-run city. Hillary Clinton is already making noises of empathy with Blacks suffering under the urban police state. However, the Black Lives Matter movement has no institutional stake in the victory of either party, but is, in fact, locked in mortal political struggle with other Black people in the Democratic Party. These Black Democrats will insist on a truce, a cessation of agitation against national or local Democrats, until after the election.

The inherent divisiveness in that message leads one to continue to question whether or not the interruption on the stage was actually aimed at pushing forward the Black Lives Matter mantra, or whether it was done for the purposes of waging war against the Democratic Party. Those two end-goals do not seem to be in congruence with one another and until a public statement is brought forward by the Black Lives Matter movement concerning the dichotomy of both organizations there will continue to be controversy over the incident in Seattle.

It has already created a lot of friction and agitation on social media, with people choosing sides from different camps. It appears the liberal politics has a chasm in their support or condemnation of this last outbreak to come after the Sanders campaign, some of it based on racial lines while others are standing firm on ideological and political lines, such as this video posted to YouTube by a Sanders supporter which has since gone viral.

‘Cops Shot Someone’ Else At Ferguson 1 Year Anniversary Protest (VIDEO)

Still Think The North Won The Civil War? These 12 Maps Will Prove You Wrong (IMAGES)