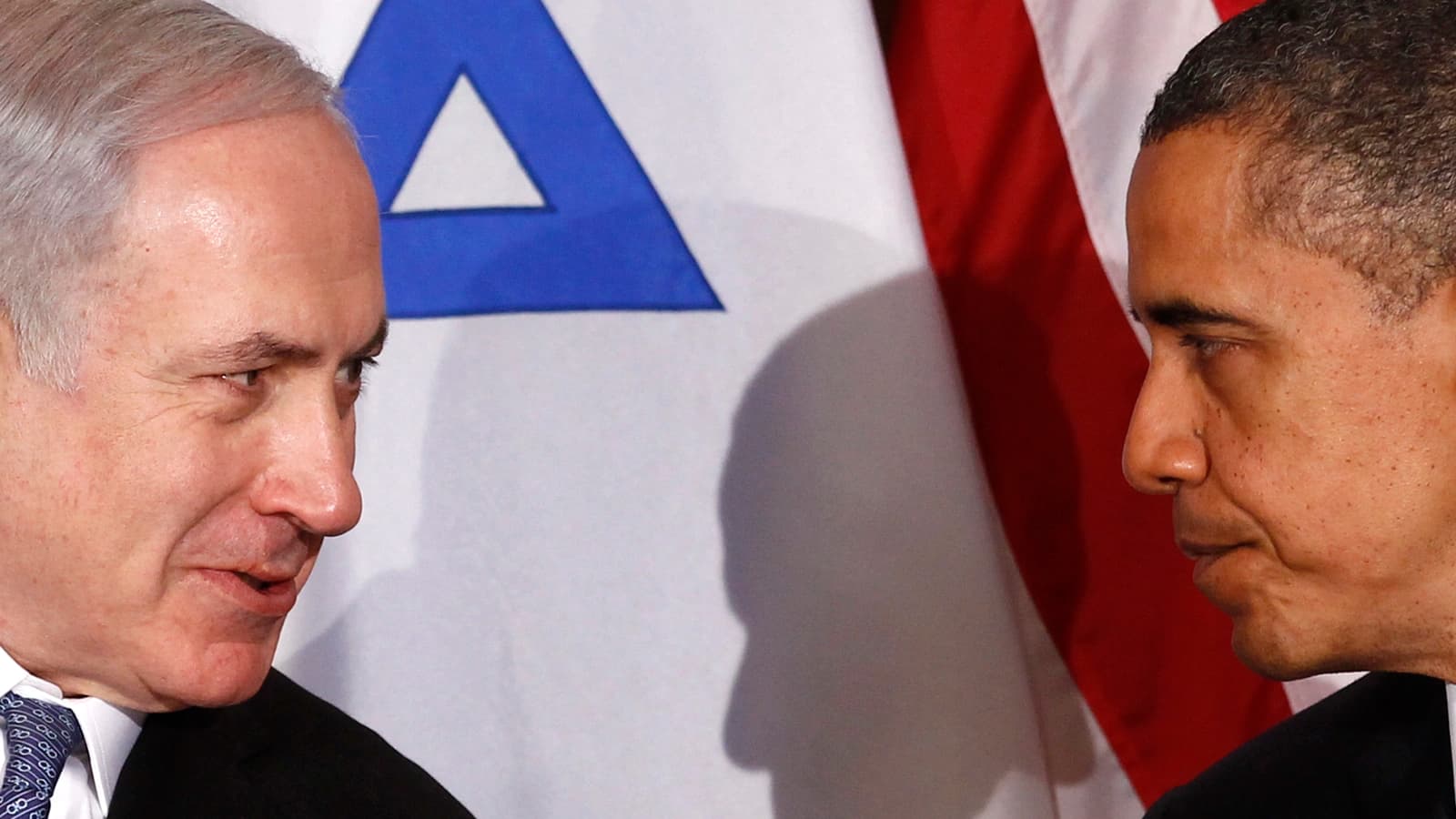 Israeli Prime Minister Binyamin Netanyahu is crashing parties on both sides of the Atlantic. The difference between his visit to the Paris  solidarity rally, and his planned visit to the United States Congress, is that he invited himself to Paris. In the US, he is actually being invited by the Republican House Speaker, John Boehner, to come to the United States to undermine the President of the United States, American foreign policy, American unity on the international stage, and the Constitution’s separation of powers.

Obama and European leaders are reportedly near to closing a deal on the oversight of Iran’s nuclear program after nearly a year of delicate multilateral negotiations. Republicans and Netanyahu oppose this deal. Congressional Republicans plan to pass new sanctions against Iran in order to derail the deal, though the president has promised to veto new sanctions. Boehner invited Netanyahu to address Congress about the sanctions, and neither of them notified the White House. The two men have different uses for each other, but together they are crossing a very serious line.

For starters, it’s completely unconstitutional. The conservative Roberts Supreme Court ruled as recently as 2012 that Congress cannot pass a law that abrogates the State Department’s primacy in the execution of foreign policy. Only the Executive branch sets foreign policy. That’s not an opinion, that’s a Constitutional fact. Were the White House to justifiably try to stop this dog and pony show, Congress would have set up a dire Constitutional crisis. Republicans are relying on the President being agreeable while they trample the separation of powers.

This takes gridlock to a dangerous, scary place. We all know that Washington is dysfunctional, that rancor is the rule. We know Boehner can’t smile during the State of the Union. Fine. But there are supposed to be certain things that are beyond the pale. Behind closed doors, the U.S. government works together on things that are objectively good, like corralling nuclear proliferation. Now that Republicans dominate Congress, giving Obama a noogie is more important than working together to prevent a nuclear showdown between the Shia arc and the Sunni/Israeli coalition? This is not using your media minions to convince half the country that the President is a Muslim. This is something that a responsible party would not mess around with.

It makes the U.S. look like a basket case on the world stage. Capitals around the world will be watching this little episode and wondering who’s really in charge. Boehner may want the world to know he rules the roost in Congress now, but when South Korea or Estonia detect troop movements across their border, and they pick up the phone at 3 A.M. Washington time, does Boehner truly believe they’re going to have his office on speed dial? It’s not his job, and I suspect he would be very annoyed to be woken up.

Republicans are trying to score points for narrow constituents. The president is looking at a far bigger and more complex board when he moves on foreign policy. This is true of any Congress and any president. I encourage Congress to pander to select hard right voters in swing states, but Congress, and those particular voters, are not privy to the complex interactions between Iran and the U.S., let alone Iran, the U.S., Israel, Saudi Arabia and the Gulf states, Russia, China, the EU and NATO. The president is privy to that information. The voters elected him and his Administration to make complex decisions on their behalf with that information. This is acutely true, because Romney teamed up with Netanyahu in 2012 to make Iran a centerpiece of that election. Voters implicitly endorsed Obama’s negotiations over Romney’s confrontation.

The line crossing goes both ways, too. There are elections in Israel on March 17th. Netanyahu is scheduled to address Congress on March 3rd. Any speech Netanyahu gives two weeks before an election that is likely to be close, is inherently about that election. Congress should not be meddling in the internal politics of Israel’s democratic process. And there’s wife-swapping on both sides. While Congress undermines the President, Mossad undermines Netanyahu, warning that the sanctions would be very destructive to the process.

Congress’s bed with Netanyahu is possibly being made by Sheldon Adelson, empowered by Citizens United. During the 2012 election, billionaire casino magnate and hardcore Zionist, Sheldon Adelson, donated $100 million to Romney. Adelson was Romney’s right hand man on his campaign and fundraising trip to Jerusalem. Romney became much more hawkish and pro-Israel after Adelson’s money arrived in Romney’s war chest. And Romney wasn’t the only candidate to emerge from a cocoon of Adelson’s money as a full-blown Zionist. After Obama’s reelection, the new Israeli ambassador to the US wouldn’t meet with National Security Advisor Susan Rice for months, but did meet with Sheldon Adelson. Netanyahu may have decided that Adelson is the real power broker in Washington. This is potentially one of the most chilling examples to date of the Democracy-crushing influence of Citizens United.

This episode is creating strange bedfellows, and demonstrating that the usual barriers between countries, even allies, are paper thin between the U.S. and Israel, especially on the right wing of both countries. Israel’s conservatives and America’s conservatives have virtually the same goals that supersede the sovereignty of either country. Their overarching goals are to prevent the approaching thaw with Iran, and to maintain the dangerous tension that legitimizes their neoconservative warmongering. Boehner’s particular goals are more parochial and national, preening before his party. Netanyahu’s goals are more national and regional, getting reelected and maintaining the tension that justifies his hardline stance. Obama’s foreign policy is global, arriving at an acceptable solution on Iran’s nuclear program without triggering a massive confrontation in the Middle East that could spiral into a world war. The tensions between these levels of conflicting interest need to be worked out in elections, think tanks, policy meetings, etc., not as stunts on a huge stage to torpedo the diplomatic process.

It’s hard to imagine this happening in any other context in the midst of a major foreign policy process. What if, on the eve of Bush’s invasion of Iraq, the Democratic Senate had invited French President Jacques Chirac to speak before Congress. He was adamantly and publicly opposed to the war. The Bush Administration had a high profile spat with Chirac, which culminated in the neocon geniuses relabeling french fries “Freedom Fries.” That showed ‘em. In the midst of all that, if Democratic Congressional leaders had grown a spine instead of bauble heads, they would have been labeled traitors. But if they brought a foreign president to repudiate Bush while he banged the war drums and shook the war maracas? Hoo-boy, that would have been a dust-up. I imagine the Democrats in the Senate who invited him would still be chained to a wall at Gitmo today.

There’s a reason that the United States, and any government, needs to speak with a single voice on the world stage. The world is not a nice place. Fundamentally, there are no hard and fast rules. The international arena is in a constant state of anarchy. It is a morass of competition ruled by constantly evolving sources of power, with a thin facade of international law and Westphalian notions of sovereignty. Approaching that arena with two competing voices creates chaos and weakens the country overall. The delicate process of diplomacy is the only thing that prevents that international anarchy from regularly erupting in blood baths. Obama seeks peace through diplomacy. By undermining him, the Republicans and Netanyahu fundamentally seek war. Fortunately, within countries, there are hard and fast rules, codified by Constitutions, certified by elections, upheld by courts. They’re called laws. Republicans in Congress should consider following them.

Is THIS What ‘GOP Leadership’ Looks Like? US Senator’s Aide Punches Guy In The Face (Video)