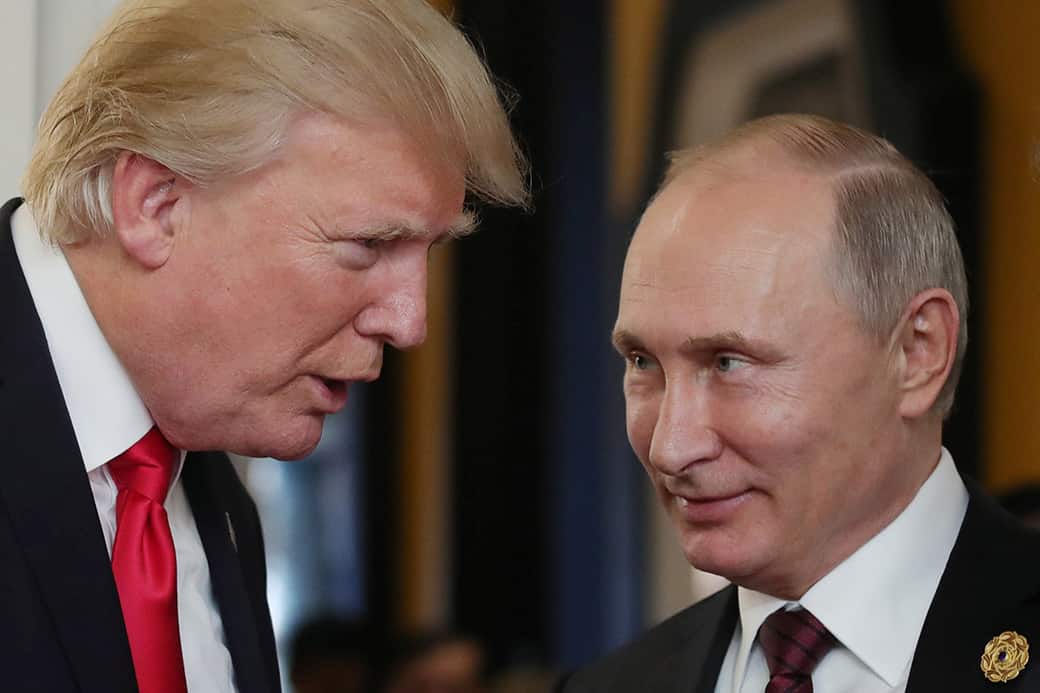 Donald Trump’s first National Security Adviser Mike Flynn, and his Attorney General Jeff Sessions, were both recently caught lying about contact they had with Russian Ambassador Sergey Kislyak. As the scandal continues to spread, one obvious place to look for connections between team Trump and Russia is Trump’s top campaign donors.

During the 2016 campaign, Trump’s biggest donor was, by far, Robert Mercer, who donated over $15 million to Trump’s campaign and related PACs. An early IBM computing pioneer, Mercer is the co-CEO of Renaissance Technologies LLC, a quantitative hedge fund that uses complex algorithms to drive investment strategies, and manages $65 billion in assets. Mercer has been active in right wing fundraising for years, and in 2016, he emerged as one of the campaign’s biggest overall donors.

Mercer was also the top donor to John Bolton Super PAC, which funneled millions in donations to cutting edge data analytics contractors, who used data mining to micro-target political ads to millions of individuals based on information gleaned from their personal online habits.

The election of Trump was not even Mercer’s first multi-million dollar data mining manipulation campaign of 2016. Mercer funded a similar data mining operation in support of the United Kingdom’s Brexit campaign, and did so in a way that likely violated British campaign finance laws, according to Dealbreaker.

But Mercer did more for Trump than merely fund his campaign and new advertising technology. Mercer also recommended that Trump hire key messaging and strategy figures who are now considered central to Trump’s inner circle, Steve Bannon and Kellyanne Conway. During the campaign it was known that Mercer was a major donor to Breitbart, the white nationalist propaganda publication that Bannon directed. But it was only on February 24th that it was discovered that Mercer is one of the owners of Breitbart, when an intrepid reporter staked out a hearing as Breitbart sought press credentials.

And we’re back. The owners of Breitbart are Solov, Andrew Breitbart’s widow, and the Mercer family

Mercer not only bankrolled Trump’s road to the White House, but his family helped prepare him to move in, and some of his top communications people are now running it.

Why did Mercer invest so heavily and risk such political exposure for both Brexit and Trump? A hint may lie in a risky investment he made in Russian telecoms that is quickly beginning to bear fruit.

In August, 2014, CNN Money reported rather quizzically that Renaissance Technologies was deepening its investments in two huge Russian telecom companies whose stocks were in rapid decline, even as international security analysts were warning investors to steer clear of investing in the region as the situation in Ukraine exploded into armed conflict. The two companies that Renaissance invested in were VimpelCom and Mobile TeleSystems, “two Russian telecommunications firms with significant operations in Russia and Ukraine, according to data from FactSet.”

Alfa Group, a holding company owned by Mikhail Fridman, a Ukrainian-born billionaire with Russian and Israeli citizenship, owns a nearly controlling share of VimpelCom. Fridman has popped up before in the investigation into Trump’s Russia connections. Fridman featured prominently in the less lewd parts of the notorious Trump-Russia dossier, compiled by a former MI6 agent. On January 11th, Forbes argued that parts of the dossier should be taken seriously,

“The dossier paints a picture of a long-standing symbiotic relationship between Alfa Group and the Russian leader. More recently, the dossier claims, Alfa owners Mikhail Fridman and Pyotr Aven have provided Putin with valuable information through their own network of business contacts in the U.S., valued particularly because of the conflicting signals Putin was getting from his diplomats and spies regarding the success of the alleged operation.”

In October, Franklin Foer published a report in Slate about how investigators had pored over internet servers under Trump’s control to look for evidence that Trump had been hacked by Russian intelligence. Instead they found something odd. They discovered a server owned by Trump, and set up in 2009, which was set up to only allow communications from a handful of other servers.

“The irregular pattern of server lookups actually resembled the pattern of human conversation—conversations that began during office hours in New York and continued during office hours in Moscow. It dawned on the researchers that this wasn’t an attack, but a sustained relationship between a server registered to the Trump Organization and two servers registered to an entity called Alfa Bank.”

The amount of incoming information was tiny, and hardly worth the price of maintaining the server. The investigators had never seen anything like it. They discovered that 87% of the incoming communication originated from two servers controlled by Alfa Bank. Fridman co-founded Alfa Bank, and he is its chairman.

In 2005, US District Court for the District of Columbia ruled against Alfa Bank in a defamation case. Alfa sued the Center for Public Integrity for publishing material saying that Fridman and Alfa Bank, as well as Russian banker Petr Aven, were connected to Russian organized crime. The Court ruled that Fridman was powerful enough to be considered a public figure, and thus lacked standing. In the ruling, the judge found,

In short, Aven and Fridman have assumed an unforeseen level of prominence and influence in the economic and political affairs of their nation. Russian newspapers coined a name for the leading oligarchs (Aven and Fridman among them) and the power they wielded: “semibankirschina,” or the “reign of the seven bankers.” The Financial Times in 1996 named Aven and Fridman as among the “group of seven businessmen and bankers that, according to one of their number, is now running Russia.” As the Moscow Times put it: “When Soviet leaders were in trouble, they turned to the Politburo for help. When President Boris Yeltsin is in dire straits, he turns to his own, updated version of the Politburo — the coterie of bankers and businessmen who, by all accounts, run modern Russia.”

Fridman’s Alfa Bank may be seen as the most stable and influential of this group, since it was one of the only Russian banks that survived the 1998 Russian financial crisis relatively unscathed and able to continue issuing loans.

Renaissance Technology’s seemingly ill-advised investment in VimpelCom, which is incorporated in Bermuda, was structured under Sponsored American Depository Receipts. Sponsored ADRs are a way for a foreign company to enter into a relationship with an American bank, so that an American company can buy its stocks. The stocks continue to fall, though, under the legal control and are marketed in the currency of the foreign country. This also, incidentally, falls outside of a lot of American oversight and transparency laws.

In October, an unnamed blogger at HSquared Magazine noted that, given Mercer’s relationship with Trump, his company’s relationship with VimpelCom was potentially alarming, since the walls between large Russian companies and the Russian government are often vanishingly thin.

“…there is the more serious question of Renaissance’s larger positions in Russian telecommunication firms, and, the type of information Renaissance is afforded as an investor in Russian firms with ties to the Russian government.”

It also raises the question of what information Fridman, Alfa and their friends in the Russian government may have gained access to from Renaissance, which has funded an extraordinary amount of data mining in Britain and the US.

On Monday, VimpelCom announced that it would be reinventing itself from a telecom into a global technology company with the new brand name VEON.

“We are now on course to deliver strong free cash flow growth and to paying a meaningful dividend to our shareholders.”

Mercer’s investment in VimpelCom, which flouted conventional wisdom, is suddenly about to pay major dividends for him. It’s almost like he could clearly see something just over the horizon that no one else could see. Something like a major thaw in relations between Russia and the West–an idea that would have gotten you laughed out of an international security conference in the summer of 2014.

VimpelCom-cum-VEON already had major interests around the world. The company owns 6 brands that control a top share of the overall telecom market in Russia, Ukraine, Algeria, Italy, Bangladesh, and Pakistan. It has a reputation for creating major friction when it seeks to expand. In 2015, VimpelCom (VEON) was at the center of a massive corruption scandal that rocked several countries when the company tried to conquer the telecom industry in Uzbekistan. Bloomberg reported in June, 2015,

“The U.S. claims VimpelCom Ltd., part-owned by Russian billionaire Mikhail Fridman, and Mobile TeleSystems OJSC used a web of shell companies and phony consulting contracts to funnel bribes to a close relative of Uzbekistan’s president, Islam Karimov, in exchange for access to that country’s telecommunications market.”

The financial and political windfall of Brexit and the Trump presidency for the billionaires who invested in this new data and technology business arrangement is astounding. Now, with Britain disappearing into its own navel and Trump in the White House, a potential cynical detente over the fate of Ukraine and Syria is creating the geopolitical space for a company like VimpelCom to reinvent itself. Suddenly, an investment which seemed moronic two years ago is now funding a company ready to pounce on opportunities nobody else would have banked on. VEON, which has cornered the market for landline and mobile platforms in six countries, now plans to become “a revolutionary mobile internet platform that integrates powerful data analytics and artificial intelligence.” That should position them nicely to take the kind of data mining that Mercer funded in 2016 into new markets around the world. The new world order of billionaires mining the data of hundreds of millions of people to push whole societies into their pockets is only just getting started.

MUST WATCH: Democratic Strategist Slams Republican: ‘You Are Enabling the Liar-in-Chief!’ (VIDEO)

MUST WATCH: Democratic Strategist Slams Republican: ‘You Are Enabling the Liar-in-Chief!’ (VIDEO)