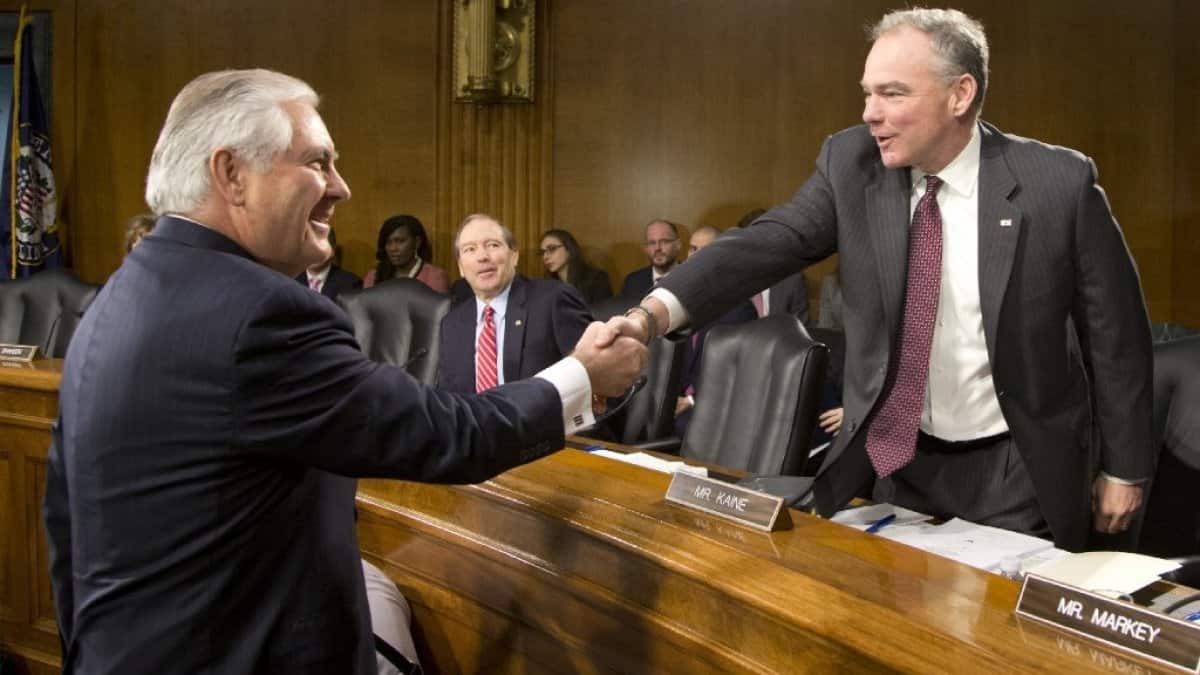 President-elect Donald Trump made his pick for Secretary of State, The Hill reported Saturday. Trump tapped Exxon Mobil chairman, president and CEO Rex Tillerson. The pick rounds out what is shaping up to be a historically unprecedented plutocratic, militaristic, pro-fossil fuels, pro-corporate profit and privatization, and pro-Russian Cabinet for the president-elect.

Tillerson has been a big donor to Republican candidates, including Mitt Romney, Mitch McConnell, and Jeb Bush. His company’s global reach means that he will have nearly as many conflicts of interest as Secretary of State as Trump will have as president.

In a Newsweek report about how Exxon Mobil investors were hoping for the Paris Climate Agreement to fail, Tillerson was quoted, “The world is going to have to continue using fossil fuels, whether they like it or not…” Elevating this man to Secretary of State is a direct threat to climate treaties, and indicates that efforts to slow down and reverse runaway global warming may be doomed for the foreseeable future.

At the helm of the world’s fifth largest corporation, and America’s largest energy company, Tillerson has pursued hydraulic fracturing (fracking). In 2014, Reuters reported that despite Tillerson’s support for fracking, he sued to have a water tower that would support fracking removed from his wealthy Dallas suburb. Fracking is good for his profits, but not for his neighborhood.

The Wall Street Journal reports that Tillerson has close ties to Russian President Vladimir Putin, which grew out of Tillerson’s efforts to build a business partnership with Russia, which nationalized its energy industry under Putin.

“Among those considered for the post, Mr. Tillerson has perhaps the closest ties to Russian President Vladimir Putin, having negotiated a 2011 energy partnership deal with Russia that Mr. Putin said could eventually be worth as much as $500 billion. In 2012, the Kremlin bestowed the country’s Order of Friendship decoration on Mr. Tillerson.”

The incoming president, whose election was bolstered by Russian espionage, has made it abundantly clear that he will give the biggest businesses, especially in the banking and energy industries, everything they want, in spite of all laws, norms, regulations, and public interest.

Trump’s pick of Tillerson comes only hours after his transition team vehemently denied a CIA report which explained that Russian intelligence worked to get Trump elected. Trump blasted the CIA. But the pick of Tillerson seems to confirm that the Trump administration is going to be designed as a conduit to impose Russian foreign policy interests on the US government.

On November 15th, speaking in Greece, President Obama warned that Trump’s election and recent successes of far right populist parties represented the “rise in a crude sort of nationalism.” I wondered at the time if he meant “crude … nationalism” in both senses of the word “crude”: crass on the one hand, and unrefined oil on the other. With Trump’s elevation of energy industry bigwigs to unprecedented positions of power in the White House, it’s becoming clear that Obama may have intended the double entendre. Trump represents a “crude nationalism”: a crass populism for the benefit of the energy industry.