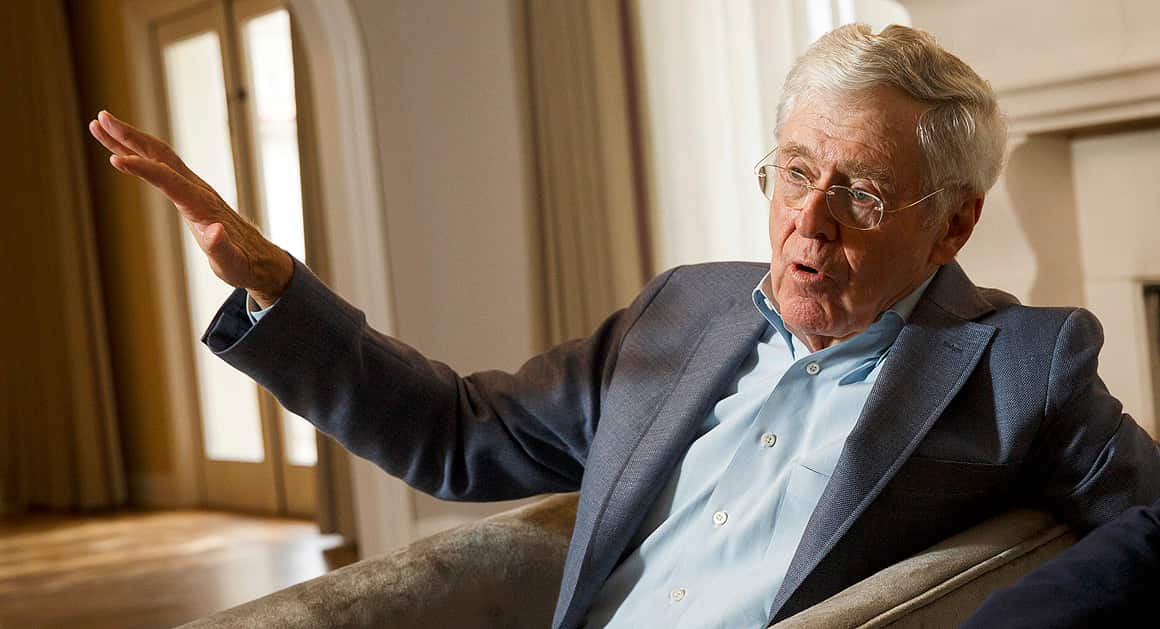 Yes, you read that headline correctly, and no, you haven’t accidentally stumbled across a satire article from National Report or The Onion. While speaking this weekend in Dana Point, California,  billionaire industrialist Charles Koch called on top GOP candidates to take a stand against corporate welfare and insisted on bringing an end to “irresponsible spending” by both Republicans and Democrats. And as if that statement alone isn’t startling enough, he went on to call for an end to income inequality, too.

In an event that makes you wonder if the show Archer is based in reality, and Dr. Krieger managed to use one of his brain chips to have his way with the billionaire (phrasing!), Koch made the startling announcement in front of 450 right-wing donors and a who’s-who of Republican presidential candidates, including Scott Walker, Jeb Bush, Marco Rubio, Carly Fiorina, and Ted Cruz. Koch opened with a line that could just as easily have been said by 2016 Democratic candidate Bernie Sanders:

“We’re headed toward a two-tiered society, a society that’s destroying opportunities for the disadvantaged and creating welfare for the rich. Misguided policies are creating a permanent underclass, crippling our economy and corrupting the business community, present company excepted of course.”

He then went on to label subsidies and preferential treatment for businesses as “corporate welfare,” describing it as “suicide long-term.” But he expects companies to bite a stick and bear it early on.

“Short term, taking the principled path is going to cause some companies some problems, as it will Koch industries. But long term it will allow business people to continue to own and run their businesses.”

That strange, deliciously sweet taste that just appeared in the back of your throat? That’s irony. After all, the Koch Brothers have taken in $88 million in corporate welfare and vowed to throw nearly $1 billion toward 2016 conservative campaigns and causes. Their puppet-PAC, Citizens United, sued the FEC in an effort to allow their money to equate to free speech in political campaigns. The Koch Brothers are pretty much the GOP’s Geppetto, and while they’ve tried to be secretive about their influence in American politics, it does seem, to most of us, that the sole purpose of their involvements has been to benefit their profit margins and gut any regulations that stand in their way.

But don’t worry, folks, the Koch Brothers are surely still evil corporate overlords ruling over the Republican base with a cruelty that would make Cersei Lannister throw up in disgust. If I were a gambler, I’d wager that perhaps the Koch Brothers were recently contemplating the afterlife in their old age, and decided it might best serve them if they could find a way to reduce temperatures significantly in Hell, because if you can’t go ice-skating down there, the VIP suites reserved for them are almost wasted money.

We probably shouldn’t be kidding around here, though. I mean, what if something really serious is happening? What if Charles Koch’s wife was kidnapped by socialist ninjas, and they’ll only free her if Koch tells Republicans that they need to fight against everything they stand for because he says so? Or worse, what if those ninjas stole — gasp! — his MONEY! I guess that might explain this story, right?