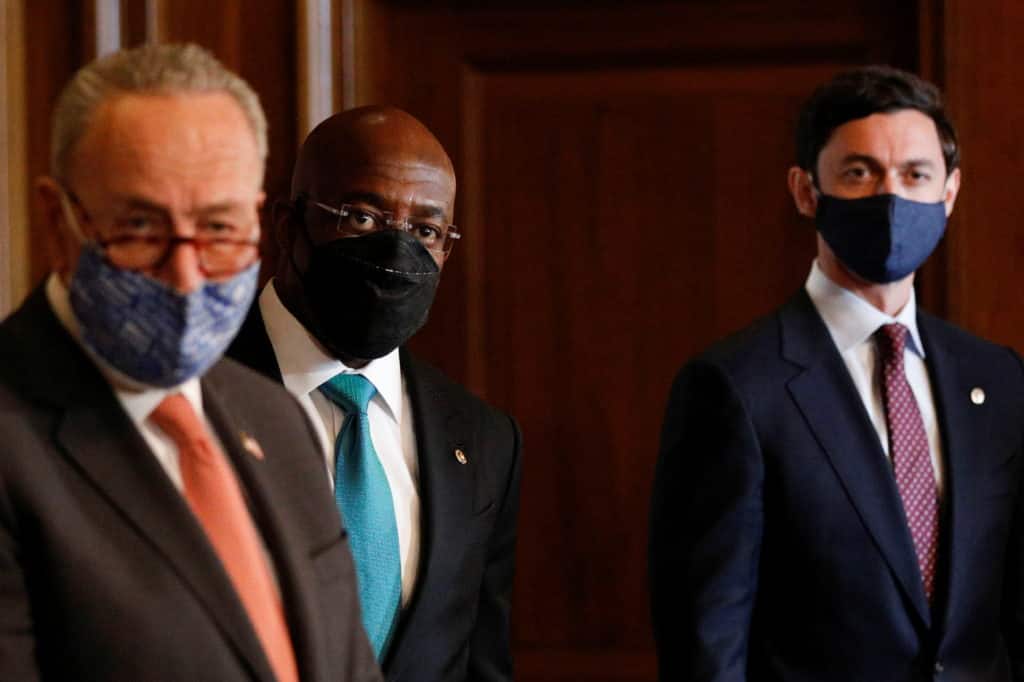 In the wake of Hillary Clinton’s disastrous loss to Donald Trump in the presidential election, Bernie Sanders and newly-elected House Minority Leader Chuck Schumer are doing what they can to help the Democrats pick up the pieces.

And the Democrats are turning to Sanders (I-Vt.), whose vision and ideas will lead the way, while Schumer will be the person to build on those strategies. Sen. Elizabeth Warren (D-Mass.) will also be instrumental in providing new ideas, Schumer told the Huffington Post.

“When you lose an election the way we did, you don’t flinch, you don’t look away. You look it in the eye and say ‘What did we do wrong?’” Schumer said. “To me, overwhelmingly, we did not have a strong economic message. What we need is a sharper, bolder, stronger, more progressive economic message.”

Schumer, like Sanders and Warren, wants to promote ideas — debt-free college, a higher minimum wage, a “bolder” stance on trade, and a tougher, more critical stance on the “rigged” system employed by lobbyists and special interests. He also proposes major investments in infrastructure as well.

Schumer has promoted some of these initiatives for years, but some of the others — most especially the language used to describe them — have been widely promoted by Sanders and Warren.

“On economic issues in particular, a strong, bold economic message wins,” Schumer said. “Bernie and I think alike on these issues and always have,” he said. He noted that Warren and Sanders backed him when he announced his intent to replace outgoing Minority Leader Harry Reid (D-Nev.), who’s retiring.

But Here’s Where Things Get Interesting

It’s largely because of Sanders that Schumer is supporting a bid by Rep. Keith Ellison (D-Minn.) to run the Democratic National Committee. There’s a bit of controversy surrounding this because Ellison has been a staunch critic of Israel and its treatment of Palestinians, whereas Schumer, who will be the first Jewish man to serve as a Senate leader, is a big supporter of Israel, The Washington Post reports.

Ellison can be pretty feisty, which frankly, is a good thing for the Democratic Party, but that feistiness has come at a cost. At one point, he apologized for a number of controversial statements, including one in which he compared former president George W. Bush’s consolidation of power after the Sept. 11, 2001 to the rise of Adolf Hitler. And during his 2012 reelection he called his opponent a “lowlife scumbag.”

“Bernie convinced me of this. Bernie asked me to do it, to organize it,” Schumer said, noting that he supports Sanders idea that the DNC needs to become more of an activist organization.

“So when we’re pushing for a strong college bill on the floor, there are hundreds of thousands of people on campuses across the country emailing, and tweeting and calling and protesting. And when we do minimum wage, there should be minimum wage workers all over the country pushing for that,” he said. “That’s what Bernie wants to do with the DNC, and I completely agree.”

And this certainly could work out to be a good thing for Schumer, because a fair number of Democrats do not view him as progressive. Especially millennials, who question his ties to Wall Street. Some were arrested last week after protesting at Schumer’s office.

The millennials who protested are affiliated with the organization AllofUs2016 and they occupied the senator’s office for more than an hour, with a group of 40 or so singing and chanting. They maintain that Democrats will continue to lose elections as long as they continue clinging to Wall Street.

They want to see Sanders take the reins as Senate Minority Leader.

“The Democratic Party establishment has failed this country. It’s failed its voters. It’s failed our generation,” said the group’s co-founder, Waleed Shahid. “The reason this country is so divided, so unequal, and so unfair is because of Wall Street billionaires who have destroyed our economy and taken over our government.

“Until Schumer withdraws his name from the running to lead the Senate opposition, the Democratic Party will continue to fail its voters.

“We need new leaders who will actually speak the truth to the American people, and Chuck Schumer failed us,” Shahid said.

So perhaps Schumer is trying to deflect some criticisms by backing Ellison, but he has also indicated a willingness to work with Trump, so there’s that. Meaning it remains to be seen whether Schumer will be truly progressive. Or not. As the Huffington Post notes, many of Schumer’s constituents are Wall Street types — big kahunas who have been his top donors for decades. People like John Paulson and Carl Icahn, who just happen to back Trump AND support Schumer. Or at least they did in the past. Paulson, a hedge fund manager hauled in billions of dollars when the housing market collapsed, and he was a major fundraiser for Schumer.

Schumer is all too aware that he has to walk both sides of the fence in protecting a dominant industry in his state while mollycoddling liberals at the same time. But perhaps most notably, he’s received plenty of support from Sanders and Warren, who have credited him with advancing a number of their interests. So there’s one good point in Schumer’s favor.

“I don’t attack Wall Street just for the sake of attacking it,” Schumer said. “But whenever there’s a challenge, I go after them. I was one of the leaders—Elizabeth Warren—Prof. Warren—called me and Dick Durbin up [after the housing bubble collapsed] and said we need a [Consumer Financial Protection Bureau]. I got it into the Dodd-Frank bill. I pushed the Dodd-Frank bill. And I have said repeatedly, and I say it as leader, they will not repeal it. They will not get 60 votes for any part of repeal of Dodd-Frank.”

And Dodd-Frank includes a number of reforms to the banking industry. As expected Republicans and Wall Street mucky-mucks do not love this bill.

“The number of people on Wall Street who are mad at me and don’t do donations exceeds the number who do,” Schumer said, adding that there are plenty of bankers and investors who are liberal New Yorkers. “A lot of these people support choice, support environment.”

So even though progressives are giving Schumer the side-eye, he has frequently focused on the needs of the middle-class. And because Sanders and Trump were so successful with disenfranchised white voters, he realizes he needs to address these voters more clearly. The economic messages promoted by Sanders and Warren resonated with progressives, unlike the cautious and somewhat inert suggestions from the Clinton campaign, and Schumer is well aware that the progressive message speaks to a broader audience.

“There’s this debate—do we appeal to the Obama constituency or the blue collar constituency? A bold, strong, progressive economic message that focuses on the rigged system and what we’re going to do when we change it, will appeal to both groups,” Schumer said.

“The beauty of that message is that it unites Democrats.”

But Democrats were firmly united behind Hillary Clinton prior to the election and fought Bernie Sanders every step of the way, especially with Debbie Wasserman Shultz at the helm. Fortunately she’s now gone. So let’s hope they have learned something here.

Watch Bernie Sanders bringing up some of the Democrats new ideas in the video below: