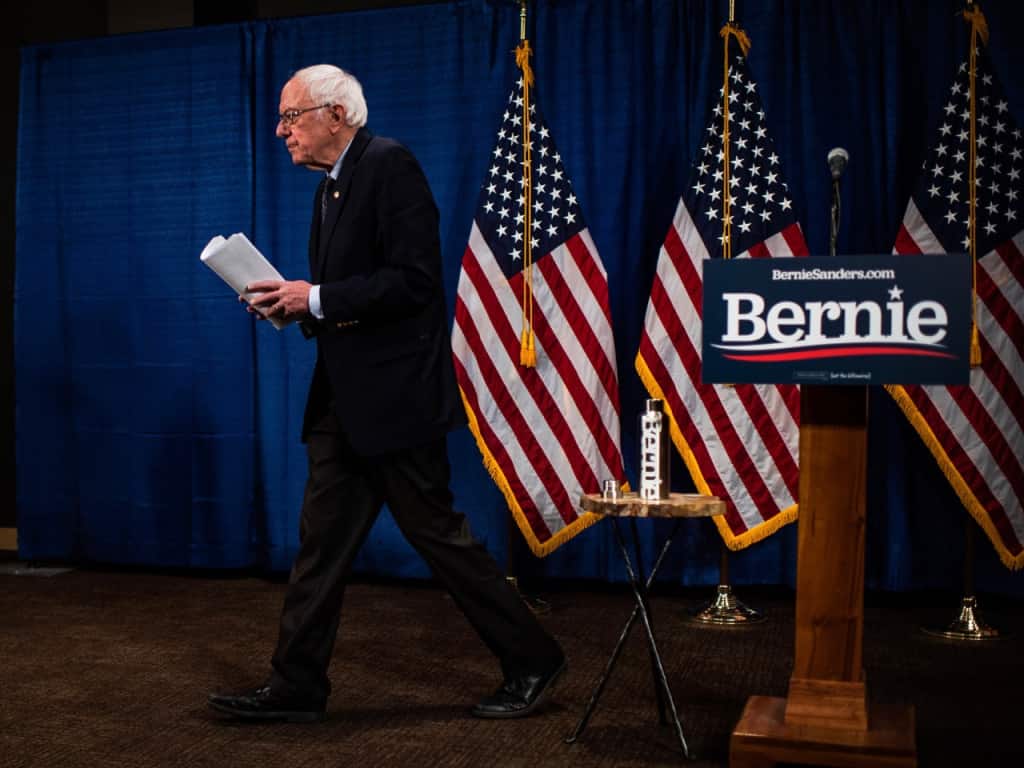 Let’s say you’re a young, passionate, and ambitious aide for an insurgent campaign. One day a random data breach presents you with your dream come true: Access to confidential campaign files from your beloved boss’ much-loathed Goliath of an opponent.

What would you do?

Believe it or not, Buzzfeed reports this dream data breach actually happened with a database run by the Democratic National Committee (DNC). The DNC provides access to information on registered Democratic voters, so presidential candidates like Bernie Sanders, Hillary Clinton and Martin O’Malley can plan events and do “outreach” with those annoying phone calls, emails, snail mails, and texts they send us. Folks running for office also have their own accounts, where they can store their own information and connect it to the database when they need to.

Alas, the DNC’s got a problem.

The breach occurred on Wednesday, a DNC official confirmed, through the NGP VAN, the leading technology company that allows campaigns to identify voters, as well as monitor their preferences and leanings, in what’s called the 50-state voter file. For a “brief window” — about 30 minutes, an official said — a bug in the software exposed the campaigns’ internal “voter ID” data.

Others on Bernie Sanders’ campaign discovered the data breach, fired the overzealous campaign worker, and reported the error to the DNC.

Alas, no good deed goes unpunished. Instead of plugging the data breach, thanking Bernie Sanders’ team for their honesty, and moving on, the DNC made a big stink about it and have cut off the Bernie Sanders campaign’s access to the database until they can “prove” they have deleted any data they downloaded from Hillary Clinton’s campaign.

How the hell can you prove you’ve deleted stuff? That’s like being asked to prove the existence of nothing.

Data Breach? Or A Handy Excuse To Hamstring Bernie Sanders’ Insurgent Campaign?
Seriously? The DNC is cutting off the Bernie Sanders campaign’s access to their database of Democratic voters because of a data breach that resulted from their bad decisions and their vendor’s incompetence? So Bernie Sanders’ campaign is cut off from contacting likely Democratic voters? Right before the Democratic primaries officially begin? How convenient…If you happen to really want Hillary to win this time around.

Buzzfeed reports, “Luis Miranda, DNC communications director, described the breach as ‘inadvertent.’” But if the DNC sees the data breach as “inadvertent,” why are they punishing Bernie Sanders by hamstringing his campaign’s outreach process at a crucial juncture. Bernie Sanders didn’t hire NGP Van — the company responsible for the data breach — to run the DNC’s database, the DNC did.

I hate to say this (actually, no, I don’t), but in light of everything else we’ve seen in terms of the DNC’s handling of the current election cycle, this looks an awful lot like they’re doing everything possible to put all candidates who are not Hillary Clinton at a disadvantage. And, as we’ve previously posted here at Reverb Press, suspicions of the DNC’s apparent determination to elect Hillary Clinton regardless of whom Democratic voters actually want are well-founded … starting with their scheduling of the Democratic debates…or lack thereof.

Various key members of the Democratic party have recently accused DNC Chair Debbie Wasserman-Schultz of running the DNC “like a dictatorship” and dimming the Democratic party’s visibility by scheduling only six debates, compared with 26 back in 2008. Some have even called for her resignation.
Once Debbie Wasserman-Schultz managed to get away with under-scheduling the Democratic debates, she then under-promoted them to the point where even die-hard political geeks had trouble figuring out when they’d take place.
Debbie Wasserman-Schultz is a long-time friend and supporter of Hillary Clinton.
I mean, how can emerging candidates like the highly appealing and experienced — but not well-known nationally — candidate Martin O’Malley get fair exposure through only six debates.

Folks from the DNC and other Democratic Party powers-that-be keep trying to present Hillary Clinton as our next president, a fait accompli. Alas, Hillary Clinton’s dogged by this constant “likability problem,” because she basically reminds us of the kind of earnest, smart, righteous, and privileged kids from high school who served as class president, and whom we respected but never liked. She may be well-meaning, but she doesn’t feel our pain, and hence we don’t see her as able to address it.

And really, after decades of lying supine and letting Democrats lose to right-wing zealots at all levels and in all branches of our government, it’s time to fight back instead of fighting over this or that data breach. The DNC has lost too many elections for too long. Howard Dean’s 50-state strategy was a proven success, yet the DNC still fail to employ it. The DNC is becoming less and less relevant — seriously, do most of us even know what the DNC is? — and ignoring a large part of the party, and even some Republicans, who want to hear from Bernie Sanders is a huge mistake.