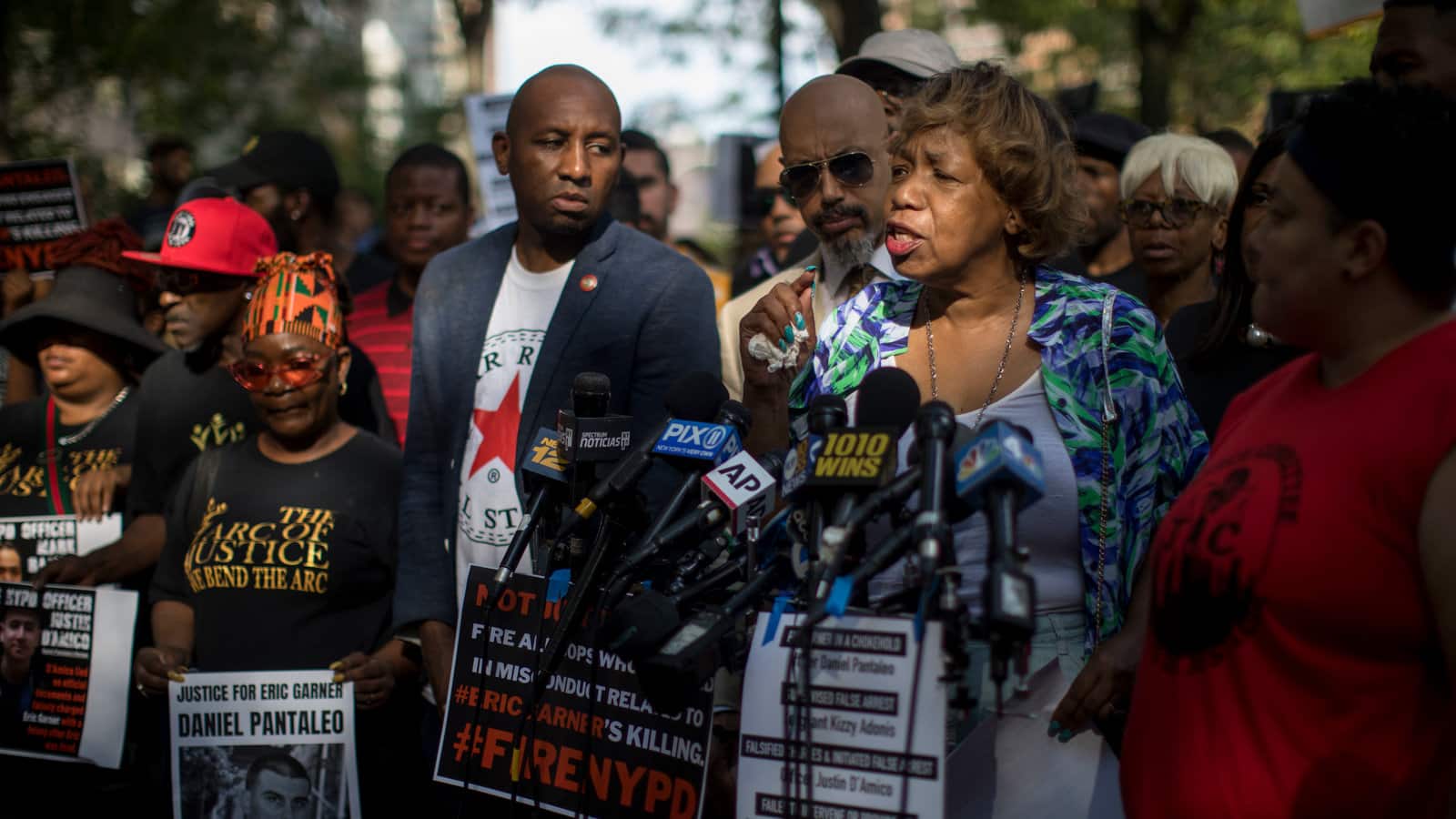 Donald Trump took his act to the upstate New York city of Rome in advance of next week’s New York Primary, and it didn’t take long until he took a shot at one of his favorite stump speech targets: Mitt Romney. Saying Romney “choked like a dog” is hardly an unusual thing to hear at one of the Republican front runner’s controversial rallies, but the specific language and physical gesturing Trump used might have been uniquely sinister, even by his standards.

‘Like a dog’: Donald Trump impersonates Mitt Romney ‘choking’ in the 2012 election.

After making a choking indication, Trump said of Romney:

As anybody who hasn’t been living under a rock for the past two years knows, “I Can’t Breathe” became a battle cry in national protests following the murder of Eric Garner in Staten Island, NY during the summer of 2014. The unarmed Garner was put in a choke-hold by uniformed New York City Police Department officers during an arrest for allegedly selling loose cigarettes without a license. The incident, which was caught on video, immediately led to Garner’s death with no attempt at resuscitation by the NYPD. Later in the year, a Staten Island grand jury failed to return a single indictment against the officers on the scene and protests sprung up across the nation. Along with the countless chants and banners, the mantra “I Can’t Breathe” (Garner’s final words) gained even more publicity when NBA

Later in the year, a Staten Island grand jury failed to return a single indictment against the officers on the scene and protests sprung up across the nation. Along with the countless chants and banners, the mantra “I Can’t Breathe” gained even more publicity when NBA superstar LeBron James donned an “I Can’t Breathe” t-shirt on national television before a game in New York City against the Brooklyn Nets.

It’s no secret that bigotry and racism have played an outsized role in Trump’s rise to the top of the Republican nomination field. The former reality television star has continually drawn criticism for his relationship with white supremacists, from repeatedly sharing their remarks onsocial mediato giving white nationalist radio hosts official media credentials, and most notably, refusing to swiftly rebuke an endorsement from former Ku Klux Klan Grand Wizard David Duke.

Where there’s smoke, there’s usually fire, which is why leading conservatives began to criticize Trump for overtly celebrating his racist backers. And despite the misinformed perception that Trump “tells it like it is”, it’s become clearer and more obvious as the campaign has moved on that this is a candidate who knows exactly what he’s saying, where he’s saying it and who he’s saying it to. The pronounced link between the candidate’s statements and the pockets of American racism throughout the country were becoming a problem within his own party, even aiding in the rise of the #NeverTrump movement.

In light of the tangible damage that these links to bigotry have done to his presidential aspirations, it stands to reason that a man as brilliant as he claims to be would migrate his message to the more subtle Republican tradition of dog whistle politics to shore up the essential racist demographic in the primary. The phrase “I Can’t Breathe” has been widely mocked and criticized in conservative circles. Garner was murdered in New York. Trump is campaigning to win the New York Primary. You can say this is merely a coincidence and Trump was simply mocking the last Republican nominee for getting annihilated in the general election against President Obama.

You can say this is merely a coincidence. You can argue that Trump was simply mocking the last Republican nominee for getting annihilated in the general election against President Obama. That’s fine.

And if you believe that, I have a wall to sell you.