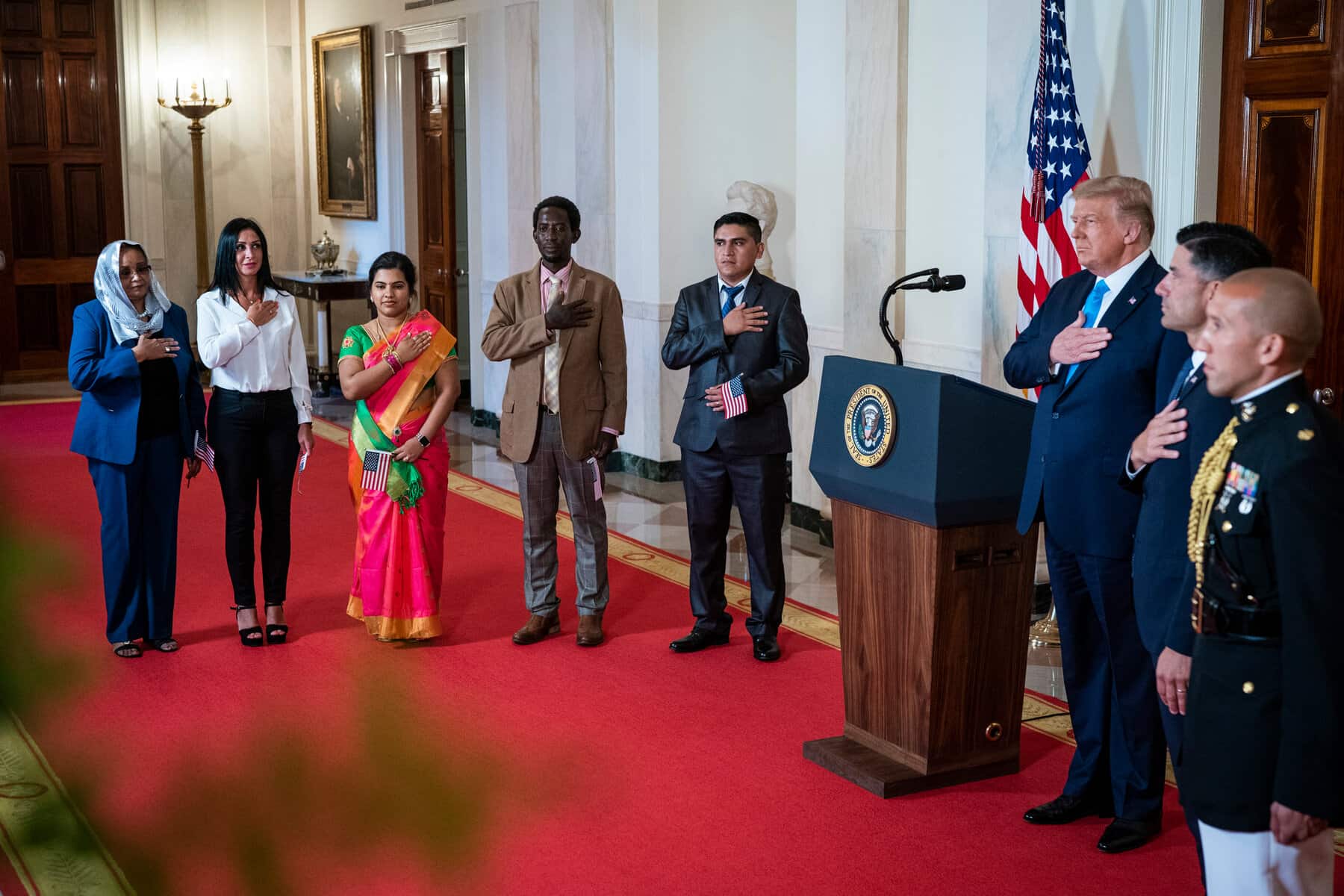 Trump’s Muslim Ban Is Approved Of By Only Two Types Of People: Bigots And Terrorists

“Neither Pagan nor Mahamedan (Muslim) nor Jew ought to be excluded from the civil rights of the Commonwealth because of his religion.” – Thomas Jefferson

I’ve never been one to mince words or attempt to attract bees with honey. I’m going to state this as plainly as I possibly can, in no uncertain terms, so even the densest elementary school dropout can comprehend it: If you support Donald Trump’s Muslim Ban, you are a bigot.

Do not pass “Go.” There isn’t a “but” there. This is a binary statement. True or false, yes or no, one or zero. Either you ignorantly hate Muslims, willfully avoiding information that may dissuade you from that course, or you have a sensible, functioning human brain that has not been corrupted by willful ignorance and flagrant bigotry.

As you’ve most likely already heard by now, “President” Trump signed an executive order on Friday banning Muslims from entry into the United States, singling out seven countries while invoking September 11th… seven countries from which not a single 9/11 attacker hailed from. Muslims from Syria, Iraq, Iran, Sudan, Somalia, Yemen and Libya may not enter the United States for 90 days. Christians from those countries, however? They’re totally welcome.

The ban singles out refugees fleeing war-torn Syria; Trump is scared shitless by the conspiracy theorist prospects of a terrorist infiltrating the United States posing as a refugee. Of course, we should only be so lucky that terrorists would be that stupid; the process through which a refugee can enter the United States is painfully long, difficult, and arduous, and has a proven track record of being highly effective at weeding out undesirables. If Trump himself were an immigrant and were put through the paces of that vetting process, he would not be granted entry into the United States.

The move has infuriated most Americans — If this is the first you’ve heard about it, you’re probably gritting your teeth right now — and the world as a whole. There are only two types of people on planet Earth excited by or happy about Trump’s ridiculously bigoted and insensitive Muslim ban: right-wing bigots who make other conservatives look guilty by association, and radical terrorist recruiters who couldn’t possibly be happier about an American President doing their job on their behalf. That’s it. If you dig Trump’s Muslim ban, you’re one of those two people.

Now that we’ve established clearly that supporting Trump’s Muslim ban makes you a bigoted fuckwit, let’s all ask a very serious question that Trump himself doesn’t really know the answer to: What will this ban actually accomplish?

In a word? Bupkis.

Trump penned his executive order from a place of ignorance, hate, and fear, being the biggest scaredy-cat to ever sit behind the Resolute Desk. Had he truly sat down and thought it through (an act which would require an IQ consisting of a number greater than that of the inches found cumulatively in his tiny orange baby-like fingers), he’d have come to the conclusion that a Muslim ban has no positive outcomes whatsoever.

Infuriating people all around the world, Muslim or not? Check. Willfully endangering the United States and her people by emboldening and empowering terrorists and stirring untold numbers of non-radicals to join their cause? Got it. Jamming a hockey stick into the delicate clockworks of diplomacy and foreign affairs? Done and done. Alienating millions of peaceful Muslim Americans and making them feel unsafe in their own country? You betcha. Inciting and inspiring white nationalist vigilantism? Without a doubt.

Never has it dawned on “President” Trump or any of his Neanderthalic slack-jawed nincompoop supporters that these United States were founded on the principal of separation of Church and State. The significance of that philosophy, a phrase coined indirectly by Thomas Jefferson himself, is utterly lost on Trump and his ilk.

The first amendment grants us the right to believe in whichever God we so choose (or no God at all), and to worship that God in a manner befitting the organized religions of our choosing as well. It’s the reason America is home to Baptists and Lutherans, Mormons and Jehovah’s Witnesses, Episcopalians and Catholics, Jews and Muslims and Buddhists and Taoists and atheists and agnostics. All faiths and practices of those faith are welcome here. Or at least, they’re supposed to be.

The government doesn’t favor any one faith or sect, and as such, you’re free to believe or not believe, and to worship however you choose, so long as you aren’t violating any other laws. It’s literally the keystone of American freedom that has held this country together for as long as it has existed. But with Trump’s insufferably ignorant Muslim ban, he’s whacking away at said keystone with a sledgehammer.

So much for Jefferson’s “Wall of Separation,” I suppose. But hey, at least we finally found one wall Trump isn’t keen on.

If You Support Trump’s Muslim Ban, You Hate America

Let’s sum all of this up, shall we? Simply put, if you support “President” Donald Trump’s Muslim Ban, you hate America. You hate freedom. You are utterly incapable of processing or beholding any semblance of patriotism. It’s that simple.

To deny any set of people entry into this country on the grounds of fear alone is quite possibly the greatest show of weakness ever displayed by an American president. And to support such an act makes you not only culpable, but equally fearful and weak. And to know in your heart of hearts that Trump is a coward, a sociopath, and an all-around shit-heel, and to sit idly by and pretend he isn’t, or to convince yourself you’re right when you know damn well you aren’t, all to save face from admitting you’ve been wrong about Trump being a good choice for the Presidency all along… that makes you even weaker.

The United States of America is supposed to be better than this. We’re not supposed to so easily succumb to the whims of the weakest and most fearful amongst us. So all of those things you’ve accused Liberals of? That we “hate America” and “hate freedom” and all that? You’re literally committing those acts right now. Learn something about the country you claim to love, or stop claiming you love it. This should be so simple that even a simple-minded bigot like Donald Trump can wrap his pea-sized brain around it. One would hope so, anyway.