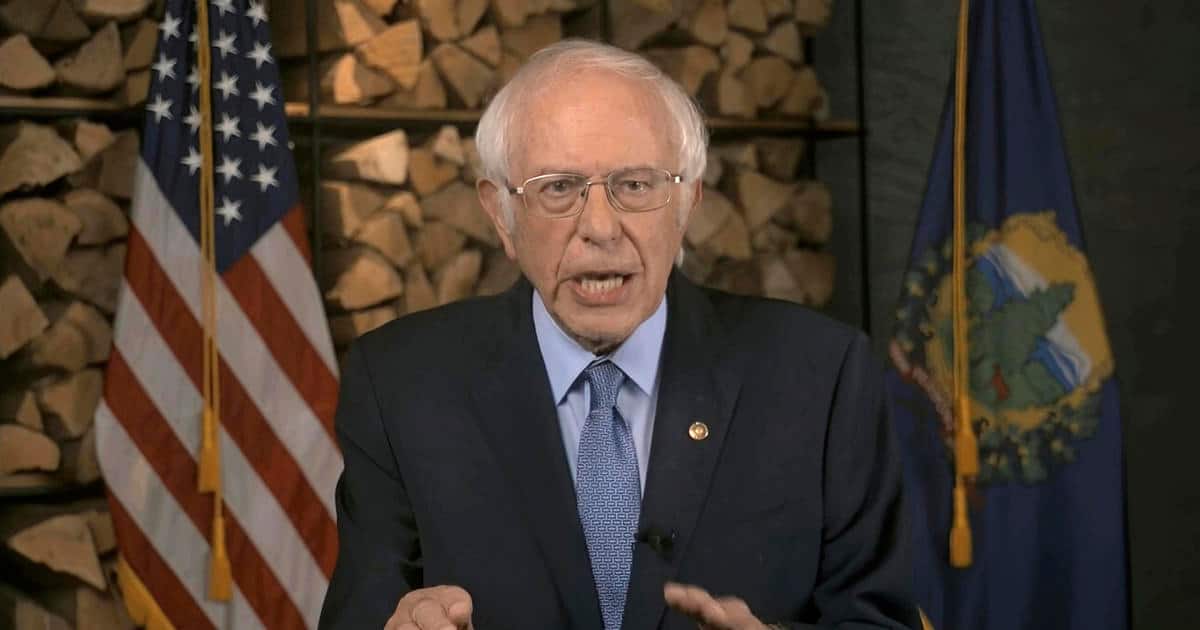 Donald Trump is determined to undermine the American presidential election system in every way possible. It’s not enough that he goads his brainless, racist supporters to attack peaceful protesters. Now he’s aiming to turn his attack dogs on Sanders.

In a tweet (that I still can’t believe hasn’t been deleted) posted a few hours ago, Donald Trump called Bernie Sanders a liar. Okay, politicians accuse each other of lying all the time big deal. It’s what else the tweet says that’s cause for alarm.

Bernie Sanders is lying when he says his disruptors aren’t told to go to my events. Be careful Bernie, or my supporters will go to yours!

I took a screen grab of the above just in case someone deletes the tweet and “The Donald” tries to explain it away. The implication of violence in this tweet is thinly veiled. Just enough ambiguity so that Donald Trump can do what Donald Trump does best — fail to take responsibility for his actions.

(A pleasant reminder to Trump voters: A man who cannot take responsibility for his actions is not what any sensible person would call a leader. But I digress…)

It might be pretty hard for Donald Trump to back pedal his way out of a threatening tweet like this. His rallies are totally associated with racist, unhinged violence against anyone who doesn’t support Trump. The right to protest peacefully doesn’t exist for the Trump crowd, the same bunch of loonies claiming that liberals are constantly infringing on their rights to “free speech.” And yet, here we are in the 21st century (I think) with Trump supporters giving Nazi salutes and demanding that American-born citizens “go back to Africa.”

Donald Trump is too egotistical or too evil to own his role in dragging American politics down into the sewers and seems to enjoy encouraging even greater acts of violence from his mentally and emotionally disturbed supporters. It doesn’t matter if the targets of the violence are protesters or reporters.

Trump loves the attention and cares nothing for the consequences — or the many people whose lives he’s putting in danger. Right now, that includes Sanders. I don’t want to hear about how Trump supporters would “peacefully protest” at a Bernie Sanders rally. These people don’t know how to avoid being violent to individuals at their OWN gatherings.

These protesters have a simple message, one that anyone who isn’t a brainless bigot would appreciate: Donald Trump wants to drag Americans back to a time when anyone who wasn’t white was a second-class citizen, when harassment, beating, and murder of such people was perfectly acceptable, and where the disenfranchised had no way to fight back. Trump protesters want it known that this is not the American way and that Trump and his supporters do not represent America.

Trump loves the attention and cares nothing for the consequences — or the many people whose lives he’s putting in danger.

A Trump supporter “protesting” a Bernie Sanders rally would likely be the sort of people who believe the exact opposite. They want a violent dictatorship where they are free to oppress the disenfranchised based on the hate they feel in their hearts — even if they’re too cowardly to own it outright. And with violent inclinations being the norm for these persons who show up to these glorified KKK meetings, I have no confidence that the people moved by Trump’s tweet to go to a Sanders event could ever peacefully protest.

These unhinged individuals will likely be armed and dangerous, or at the very least simply dangerous. They would start fights, and they would hurt people. They may even kill someone. That’s not even getting into the possibility that someone, some deeply troubled individual, could take that tweet as a signal that they have been given permission to eliminate the “evil socialist threat” of Bernie Sanders.

My God, what IF something was to happen to Sanders or his supporters, and this person were to say that he did so for Trump? Would Donald Trump even bother to take personal responsibility for the harm he would have caused?

I sincerely doubt it. This man is incapable of taking responsibility for his words and the consequences of what he says. People want this man to be president? Last time I checked, the words of a world leader could have the sort of consequences that get entire populations wiped out in a matter of days. The kind of consequences that turn allies against us during a global economic crisis that we can’t afford to weather alone.

Bernie Sanders did respond to Donald Trump’s childish antics by saying he’s taking his words “with a grain of salt” because Donald Trump is a man “can’t stop lying about anything.” You can see the video below:

Again, it’s not uncommon to call other politicians liars. However, Trump has gone too far with this tweet and the very real threat of violent protests at Sander rallies in the future.

Donald Trump is the enemy of every modern American and any functioning human being with a heart that beats for real democracy. Voting for him does more than go against your best interests as an American — you are voting against the best interests of an entire species.