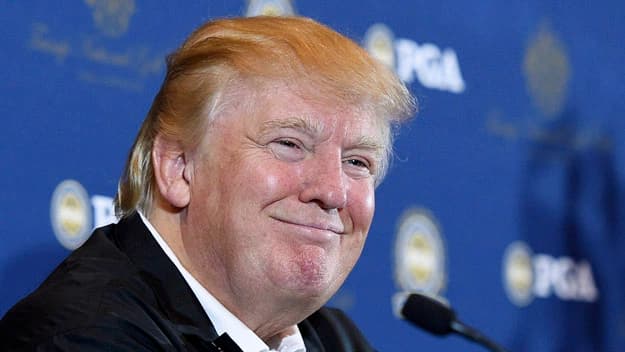 How do you make sure it appears you have people who want you to be President of the United States?

Allegedly, Donald Trump paid attendees of his campaign announcement to come and cheer at his announcement and laugh at his offensive jokes.

In an email obtained by the Hollywood Reporter, the New York-based Extra Mile Casting sent out a casting call for the event. The email read:

We are working helping one of our associates out at Gotham GR – with a big event happening on TUESDAY 6/16/15.

This is an event in support of Donald Trump and an upcoming exciting announcement he will be making at this event.

This event is called “People for a Stronger America.” The entire group is a pro-small business group that is dedicated to encouraging Donald Trump and his latest ventures.  This event will be televised.

We are looking to cast people for the event to wear t-shirts and carry signs and help cheer him in support of his announcement.

We understand this is not a traditional “background job,” but we believe acting comes in all forms and this is inclusive of that school of thought.

This will take place inside / interior.

We would love to book you if you are interested and still available.

Please let us know and we will get back to you with confirmation.

“Mr. Trump draws record crowds at almost every venue at which he is a featured speaker. The crowds are large, often record-setting and enthusiastic, often with standing ovations. Mr. Trumps message is ‘make America great again.’”

I wonder how much Lewandowski was paid to say that? Trump does, after all, run a “reality show” that is scripted and completely controlled, so it’s not at all surprising that he would also try to manufacture faux support for his campaign to draw the illusion to the public that people actually like his ideas.

One editor for Mashable even took a picture of the supposed “homemade” signs that were brought to the event to support Trump:

[email protected] staffer not too pumped i took pic of “homemade” signs (passed out to people before event) in trash.

Clapping man is my fave part of @realDonaldTrump announcement. These are the “thousands” of people he referenced… pic.

Here’s a pic from one of the actor’s Instagram accounts that was later deleted (wonder why? Probably due the to a non-disclosure agreement many are required to sign when appearing on TV.. that’s just a guess, though):

According to the Daily Mail, the man is a “jobbing extra” in New York City, and the woman beside him is also an actress.

To put it simply, Donald Trump likes attention, and he also likes ratings for his shows. He’s always running for something when a new show is in the works to air on television. He’s getting his face out there. Some politicians run to sell books (Rand Paul, Rick Santorum, Newt Gingrich, et al.) others run to get better ratings.

Because, generally speaking? Trump doesn’t draw large crowds. At CPAC last year, he spoke to a near empty room. People do NOT want him to be president. Comedians, however, are enjoying his run immensely.