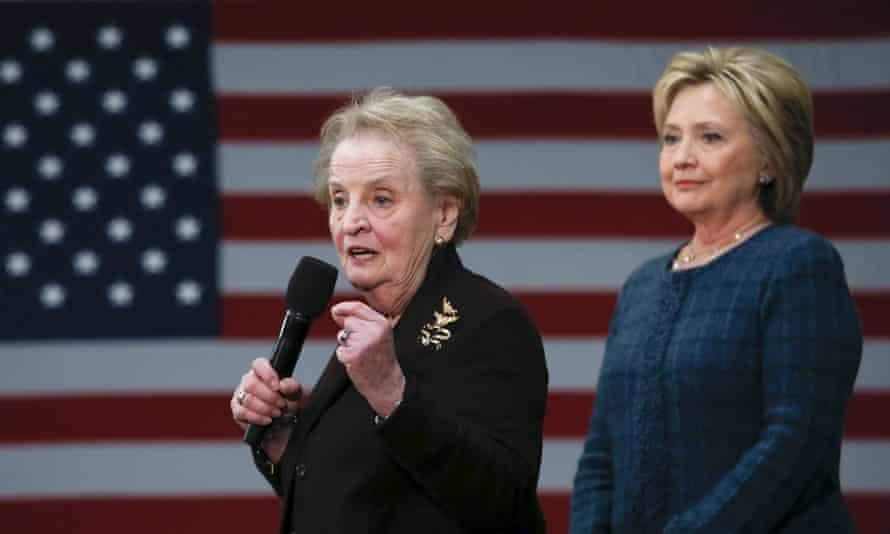 In only 60 seconds, set to a rousing violin score, “Stand Up” summarizes the job of the presidency as the person who “has to solve problems as big as the world and as small as your kitchen table.” It reminds viewers that Hillary was First Lady, and claims that she “helped get healthcare for 8 million kids.” It shows that she was Senator from New York, and says she helped New York City “rise again” after 9/11. It says that as Secretary of State, she “stared down hostile leaders around the world,” while splashing a picture of Clinton talking to Russian President Vladimir Putin. The ad promises that she’ll protect Social Security, Medicare and Planned Parenthood. It also promises that “she’ll take on the gun lobby,” an unmistakable reference to her recent debate attacks on Bernie Sanders’s gun control record.  The ad then shows Donald Trump and Ted Cruz, and says Hillary will “stop the Republicans from ripping all our progress away.”

The ad seeks to give Mrs. Clinton’s strengths the feeling of overwhelming force while conveying that only she has what it takes to meet the demands of the presidency and to defend what Democrats hold dear.

One of the first things that a viewer who has been following the Bernie Sanders campaign closely would notice is that his new ad is far more slickly packaged than some of his campaign’s earlier ads. While Clinton has always benefited from a huge war chest, and powerful allies in the public relations industry, Sanders has built a budget of millions of dollars on micro donations over the past six months. His early ads looked like amateur home videos because, well, they basically were.

“America,” is also far more subtle than Clinton’s ad. At first blush, it seems to just be a series of vignettes set to Simon & Garfunkel, building a Vermont hippie vibe with love for Iowa. The ad asserts and promises nothing. The only words in the ad prior to Bernie Sanders approving the ad, is the voice of Paul Simon singing. Yet, there is a method to it. It cleverly weaves images of the kind of movement that Sanders is striving to build, and the kind of America he and his nascent movement envision. The ad opens on a wind farm, and quickly segues through a mom and pop country store, docks, a young mother and her daughter, cattle farmers, the skyline of Des Moines, a boutique coffee shop, a small business, families, families, families, and farmers. It finally lands at a Bernie event with a gleeful middle-aged couple dancing.

Here is where the ad begins to reward multiple viewings for its subtlety. The dancing couple hits the note on the words “let us be lovers” in the song. Then, brilliantly, Simon sings “we’ll marry” as an image of a young lesbian couple embracing splashes on the screen. The phrase “our fortunes together” accompanies Bernie Sanders listening intently to middle aged working class men. Then young women, led by a woman of color, enthusiastically high-five middle aged people standing in line for a Bernie event to a harmonious guitar rift. A young child carries a lamb across a family farm to the tune of “I’ve got some real estate here…”

Paul Simon then belts out, “They’ve all come to look for America,” as Bernie Sanders arrives, unassuming, to a campaign event where a crowd is going wild. The ad then splashes hundreds, possibly thousands of faces of average Americans on screen at lightning speed. The song, and the imagery, arrive at Bernie Sanders announcing his campaign for president to a Burlington, Vermont crowd on the waterfront he helped restore as mayor. The word “America” hangs below him, in the crowd, in silhouette.

Watch the ad three or four, or more, times, and you begin to notice that it is actually working overtime to subliminally address some of Bernie’s key weaknesses. The last third of the ad shows several split-second images of people of color in Bernie campaign crowds, and particularly shows Bernie Sanders embracing women of color. The Root recently analyzed Sanders’s challenge in connecting with Black voters, particularly those over 30. It concluded that, if Sanders can make greater inroads into the Democratic base’s Black voters, he would be in a much stronger position to win the nomination.

How Does Hillary’s Campaign Finance Reform Plan Compare With Bernie’s? You’d Be Surprised