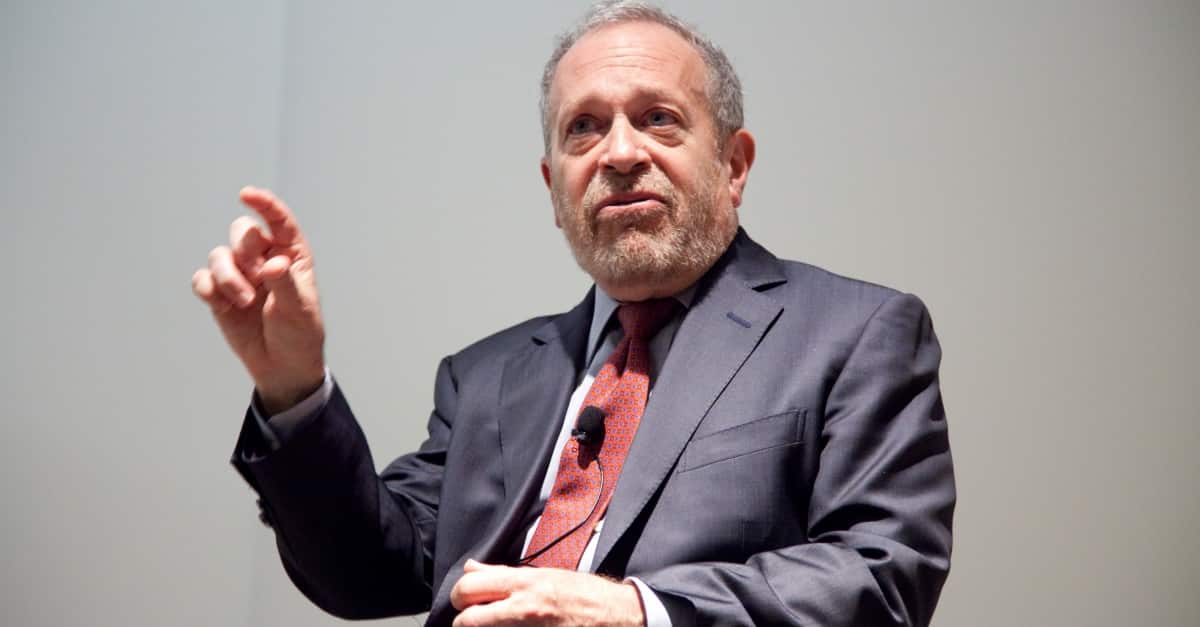 0
SHARES
0
VIEWS
Robert Reich, an economist and the former labor secretary under Bill Clinton, isn’t overly enthusiastic for a Hillary Clinton presidency. While most liberal Democrats agree electing a water-logged shoe is better than any of the Republicans, if we don’t elect a president who is willing to create change, we’re not going to be any better off.

While Sanders is often painted as a radical, namely by his opponent, the things Sanders is running for are actually in the mainstream. Universal health care, Wall St. reform, campaign finance reform, taking on wealth inequality and financial insecurity, raising wages, free public college — these are all things that an overwhelming number of Americans agree on.

Clinton has scoffed at Sanders, and reversed President Obama’s old campaign slogan, “No, we can’t!” Clinton’s Super PACs are acting as if Sanders wants to bottle rainbows and build houses out of candy. But what they’re actually saying is, the establishment has already decided we won’t have those things, even if the majority want them. But what the establishment doesn’t realize, it’s not up to them to decide what Americans can have, it’s up to voters.

While Obama has been a great leader and pulled America out of a very tight spot and he’s accomplished some noble things, but wealth inequality has only worsened, wages are still stagnant, and families are still stinging from the recession. Reich explains this catch-22 will continue until we have a leader serious about taking on the billionaires:

“Democrats have occupied the White House for sixteen of the last twenty-four years, and in that time scored some important victories for working families – the Affordable Care Act, an expanded Earned Income Tax Credit, and the Family and Medical Leave Act, for example.

“But they’ve done nothing to reverse the worsening cycle of wealth and power that has rigged the economy for the benefit of those at the top, and harmed most Americans. In some respects, Democrats have been complicit in it.”

This is entirely true. While no administration has made 100 percent perfect choices, we’ve gotten more from the Democrats regarding progress, but the load on the average American’s back gets a little heavier with each passing administration while the top one percent gets richer and richer.

“Both Bill Clinton and Barack Obama ardently pushed for free trade agreements, for example, without providing the millions of blue-collar workers who thereby lost their jobs any means of getting new ones that paid at least as well.

“They also stood by as corporations hammered trade unions, the backbone of the white working class. Clinton and Obama failed to reform labor laws to impose meaningful penalties on companies that violated them, or enable workers to form unions with a simple up-or-down votes.”

As jobs move overseas, and corporations choose profits over people, the American worker loses the most. When workers don’t have the ability to unionize, it makes it easier for businesses to drive wages down, provide fewer benefits, and exploit labor. So given that Reich is very much pro-worker, the choice between union-backed Sanders and corporate-backed Hillary is clear.

“In addition, the Obama administration protected Wall Street from the consequences of the Street’s gambling addiction through a giant taxpayer-funded bailout, but let millions of underwater homeowners drown.

“Both Clinton and Obama also allowed antitrust enforcement to ossify – with the result that large corporations have grown far larger, and major industries more concentrated.”

Hillary also voted for the bailout even though she campaigns on being “tough on Wall Street.” And hey, it was a hard choice to make, but Sanders didn’t think it was right for these casino capitalists to privatize their profits and socialize their losses while Americans were facing foreclosures and unemployment. That’s why he wants Wall St. to pay Americans back by funding public universities and infrastructure (which currently has a D-rating from the Society of Civil Engineers).

And on top of all that, the last two Democratic presidents did nothing to reform the political process which now serves the rich thanks to Citizens United:

“Finally, they turned their backs on campaign finance reform. In 2008, Obama was the first presidential nominee since Richard Nixon to reject public financing in his primary and general-election campaigns. And he never followed up on his reelection campaign promise to pursue a constitutional amendment overturning ‘Citizens United v. FEC,’ the 2010 Supreme Court opinion opening the floodgates to big money in politics.”

And it’s likely the President won’t fulfill that campaign promise. Obama does have the power to issue an executive order to force government contractors to disclose their campaign contributions, but for some reason, he hasn’t bothered. While both Democrats in the presidential race say they will tackle campaign finance reform, only one candidate is walking the walk and rejecting all Super PAC money.

“What happens when you combine freer trade, shrinking unions, Wall Street bailouts, growing corporate market power, and the abandonment of campaign finance reform? You shift political and economic power to the wealthy, and you shaft the working class.

“Another Democratic administration would be far, far better than a Republican one. But unless we change the structure of power in America, the terrible trends of widening inequality, declining real wages for most, and oligarchical politics will only worsen.”

These are real problems that we can fix unless we choose to ignore them, choose the path of least resistance, choose leaders who ignore these issues. Sanders is often criticized for having plans that could never be implemented, but that is woefully untrue — within two elections Democrats could have a new majority willing to work with Sanders and for Americans.

Reich is right, a Republican president is not an option at this point, but if we choose a Democrat who says “No, we can’t!” then we’re we’re shackling ourselves to someone who can’t be bothered to help us out. Our broken system representing the few instead of the many will spiral on, we’ll continue to compete with third world countries for labor, we’ll continue living on stagnant wages while the wealthy sit on ever-growing piles of money. We’ll continue to struggle without health care, with staggering student debt. Because we bought into limitations rather than change.

Our system will never benefit the majority instead of the few unless we stand up and say, “Enough is enough!”