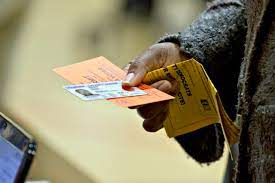 With a little over a week to go before both major parties face a crucial Wisconsin Primary that will set the narrative for the next month of this cycle, a FOX News host is defending the disenfranchising practice of Wisconsin’s Voter ID Law, and he’s doing so with what just might be the most ridiculous comparison you’ll hear to date. While interviewing the man who signed the ID requirement into law, Governor Scott Walker, “Fox and Friends” co-host Steve Doocy blew smoke up Walker’s ass by belittling the issue and comparing it to purchasing cold medication:

(I)n some states, you’ve got to present some sort of ID before you can vote. Which is fair because when I go to CVS, I got to get out a driver’s license if I’m going to buy Benadryl.

Not one to miss a chance to bring absolutely nothing to the table, Doocy’s fellow co-host Ainsley Earhardt added:

Walker, quite appreciative of the softball lobbed in his direction, repeated his focus-group approved bumper-sticker sound bite about cheating at the polls:

Walker conveniently failed to mention that during the Wisconsin primaries for other state offices earlier this year, poll workers turned away a ninety-year-old veteran who fought in the Battle of Iwo Jima, deeming his Veteran Identification Card “insufficient”. As we all know, men in their nineties have a long, storied history of committing voting fraud in local elections.

The “Fox and Friends” conversation was an opportunity for Walker to respond to criticism he’s been facing from Democratic Presidential Candidate Bernie Sanders as his campaign moves into Wisconsin. Speaking at a rally in West Allis, Wisconsin, Sanders said:

It is clear to me, and to any thinking person, that what Governor Walker and other Republican governors all over this country have done is try to suppress the vote – make it harder for low-income people, old people, young people to participate.

I say to Governor Walker and the other cowardly Republican governors if you are afraid of a free and fair election get out of politics, get another job.

This is more than a typical stump speech issue for the Sanders campaign. Coming off of the Arizona Primary, which saw some of the worst voter suppression tactics in recent memory — and disproportionately impacted Sanders voters at nearly incomprehensible ratios —  the Vermont Senator has every reason to highlight how these Republican controlled states purposely try to limit voters in the name of “fairness”.   As has been well documented, you are 33% more likely to be struck by lightning than  to commit voter fraud. The ID laws are just the latest in a long line of conservative attempts to tamper down turnout. With Sanders in striking distance of Hillary Clinton’s pledged delegate lead, every vote in Wisconsin counts.

As Newsweek’s Winston Ross pointed out recently, Wisconsin is “pivotal”:

On April 5, a less-predictable blend of voters in the maverick-friendly state of Wisconsin gets to have its say, and while (FiveThirtyEight.com editor) Nate Silver may give Clinton an 84 percent chance at winning the primary, Sanders is every bit as likely to defy the polls in the Badger State as he was in Michigan, experts tell Newsweek.Sanders’s Michigan win was an important one because everyone can now point to it as evidence that the pundits and the polls are lying to you. If he wins in Wisconsin, that lends credence to the idea that Michigan was no fluke, and that Sanders belongs in the race.

Knowing what we do now about Arizona, it’s not inconceivable that the Wisconsin Republican Party can directly impact the results of what takes place April 5th in the Badger State. Walker’s identification law could allow enough nefarious activity at targeted polls to swing the results in their preferred direction. Perhaps it’s towards Bernie Sanders, with the Republican logic that a self-described Democratic Socialist could never win nationally (despite numerous polls and fundraising records showing otherwise). Or maybe it’s towards Clinton with the assumption that her unfavorable ratings would make her more vulnerable in the general election. Regardless of who they’d rather lose to, it’s not their decision to make.

The decision belongs to the voters. Each and every one of them.

And a citizen’s right to select a President is fundamentally more important than their right to cold medicine.

10 Things Trump Supporters Are Too Stupid To Realize