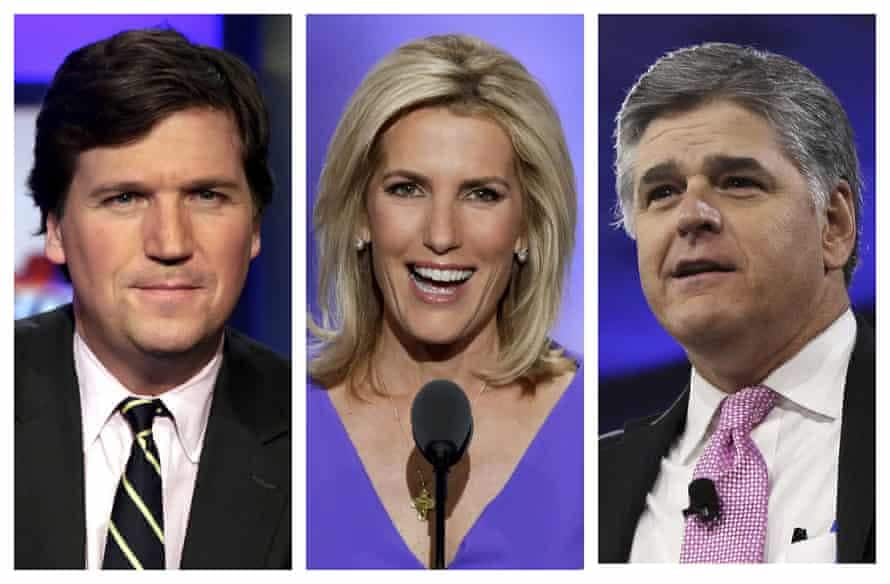 Monday night’s episode of Fox News’ Tucker Carlson Tonight scheduled a discussion about the “Not My Presidents” Day demonstrations being held across the country. These events were an extension of the virtually non-stop demonstrations taking place since the election. They are attended by tens of thousands of Americans protesting Donald Trump’s extremist right-wing agenda.

There was just one problem. Carlson tried to book an organizer of the demonstrations, but all of them refused to go on his show. That’s a wise decision considering his reputation for ambushing and insulting his guests. So how did Carlson respond after being rejected by the protests’ organizers? He booked an actor to portray an organizer and proceeded to debate him. Talk about fake news. The Daily Beast reported this comical perversion of journalism:

“Fox News’ Tucker Carlson had a hard time booking Olga Lexell, the creator and co-organizer of the nationwide Not My President’s Day protests on Monday. So, after repeated refusals, Carlson’s show instead booked Shane Saunders, a Los Angeles-based actor and casting agent, who Lexell said ‘was not affiliated in any way with our rallies and was not an organizer.’” […]

“For a man who knows nothing about the protests to go on TV unprepared, misrepresent our message, take credit for our weeks of hard work, and make us look bad – and for Tucker Carlson’s team to go along with it – is just disappointing.”

That’s putting it mildly. The whole segment was a farce, beginning with the false graphic describing Saunders as the “protest organizer.” Carlson began the segment by heralding the “virtuous” celebrations of Presidents Day. However, he immediately segued to the protests, implying that they were not virtuous, and asserting that they have no point. Saunders made an attempt to brush back Carlson’s premise with a listing of the achievements made by protesting. He concluded by noting that the protests were “getting to Trump” and that they have him “frazzled.”

Carlson’s next question was a perfect example of why he’s regarded as television’s stupidest pundit. First, he scrunches his face up into an expression that says he’s both bewildered and annoyed. It’s his trademark expression that he maintains throughout most of every show like a frozen mask. Either that or his unhinged cackling. Then he asked “So you want the President to be more frazzled?” Yeah, that’s it. After listening to numerous justifications for engaging in protests, that’s what Carlson thinks was the salient point. For the record, this president is naturally frazzled and doesn’t need any help getting there. It’s one of the symptoms of his malignant narcissism. Everything that isn’t overtly adoring and worshipful frazzles him.

Carlson spent the rest of the interview trying to get Saunders to comment on Trump’s anti-LGBTQ policies. That had nothing to do with the topic of the discussion, but Carlson pounced because he thought it would make a good distraction from the issue at hand. Saunders stumbled through the inquisition and was clearly unprepared. Perhaps because he was not a real organizer of the protests nor a spokesperson for gay rights.

What Carlson aired was a reality TV version of a news program. It’s participants were not experts on the subject matter. And the script simply called for empty conflict rather than useful information. It’s typical of Carlson’s on-air persona. He’s been fired from several networks for low ratings (CNN, PBS, and MSNBC). Now he may have found his audience on Fox News. Their viewers have considerably lower standards. They require neither a factual basis nor intelligence. Congratulations Tucker. You’re home.