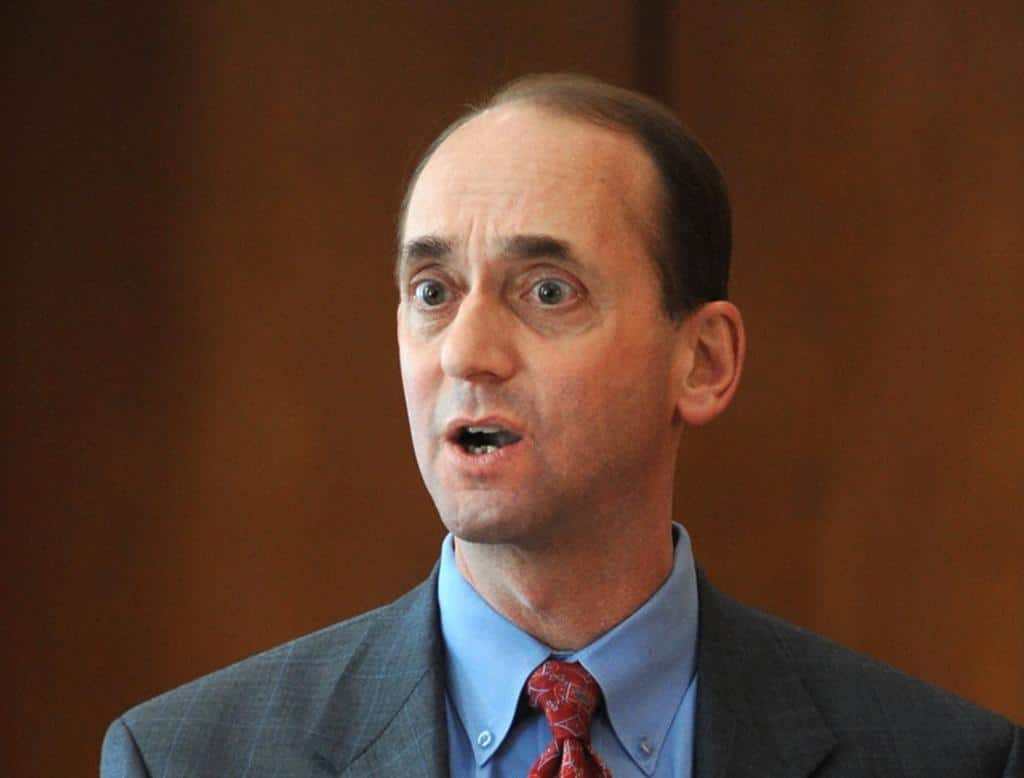 A prominent former Republican U.S. Senator from Missouri gave a scathing rebuke of his own party during a eulogy for GOP Missouri state auditor Tom Schweich. Schweich fatally shot himself last week in his home, minutes after making multiple phone calls inviting reporters to his home in order for him to air his grievances over Republican bullying of him.

Danforth said during the eulogy for Schweich that “politics has gone so hideously wrong,” and implicated the tone of his own party for Schweich’s suicide. Schweich had announced recently that he would pursue the Republican nomination for Missouri governor in 2016 and was specifically upset over a radio commercial and an anti-Semetic “whisper campaign” being conducted against him by his Republican opponents for the Missouri governorship. The commercial made fun of his appearance, comparing him to Barney Fife, who was the fictional deputy sheriff played by actor Don Knotts on the long-running television series The Andy Griffith Show.

But what apparently upset Schweich the most was the implication made by his Republican opponents that he is Jewish. He said as much to Danforth in a phone call shortly before he fatally shot himself. As Danforth said in the eulogy:

That subject took up 90 percent of a long phone call. This was more than an expression of personal hurt as with the radio ad, this was righteous indignation against what he saw as a terrible wrong. And what he saw was wrong is anti-Semitism.

He said he must oppose this wrong, that he must confront it publicly by going before the media where he would present several witnesses. He said that they would verify that there were several times when the rumor had been spread.

Tom called this anti-Semitism, and of course it was. The only reason for going around saying that someone is Jewish is to make political profit from religious bigotry. Someone said this was no different than saying a person is a Presbyterian. Here’s how to test the credibility of that remark: When was the last time anyone sidled up to you and whispered into your ear that such and such a person is a Presbyterian?

Tom told me of his Jewish grandfather who taught him about anti-Semitism, and told him that anytime Tom saw it, he had to confront it. So Tom believed that that was exactly what he must do.

“Hancock has said he may have mentioned his mistaken belief that Schweich was Jewish, but that it was innocent conversation. He has vehemently denied it was meant as a smear. He has said it was merely a description, similar to saying, ‘I’m Presbyterian and somebody else is Catholic.’”

In his eulogy, Danforth dismissed that explanation, although he did not bring up Hancock’s name:

“Tom called this anti-Semitism, and of course it was. The only reason for going around saying that someone is Jewish is to make political profit from religious bigotry. Someone said this was no different than saying a person is a Presbyterian. Here’s how to test the credibility of that remark: When was the last time anyone sidled up to you and whispered into your ear that such and such a person is a Presbyterian?”…

…”This campaign for governor started two years in advance of the 2016 election. And even at this early date, what has been said is worse than anything in my memory, and that’s a long memory. I have never experienced an anti-Semitic campaign. Anti-Semitism is always wrong and we can never let it creep into politics.”

Strong words from Danforth, but he is spot-on. The rhetoric in today’s political arena has become too overheated, so much so that politicians will shamelessly throw out as much mud as possible in the hopes that some of it will stick. And it always does. Look no further than the right-wing media’s ongoing attacks against President Obama. Many Republicans remain convinced to this day that their president is a Kenyan-born Muslim who wants to put Christian Americans into concentration camps.

Not even a month after Schweich announced his candidacy for Missouri governor in 2016, the attack ads started flowing from his GOP competitors. Like the one from Citizens For Fairness, a GOP political action committee with close ties to other Missouri Republicans.

Listen to the despicable ad below. Here is the transcript for the ad:

‘Elections have consequences. Tom Schweich, like him? No. Is he a weak candidate for governor? Absolutely, just look at him. He could be easily confused for the deputy sheriff of Mayberry. But, more importantly, he can be manipulated. That’s why Sen. Claire McCaskill and President Obama enlisted my help to meddle in another Republican primary with Schweich as our pawn. You see, Schweich and McCaskill are tied at the hip. Schweich even gave money to McCaskill’s campaign. Schweich is an obviously weaker opponent against Democrat Chris Koster. Once Schweich obtains the Republican nomination, we will quickly squash him like the little bug that he is and put our candidate, Chris Koster in the governor’s mansion.”

Danforth had some strong words about this ad in the eulogy he gave:

Indeed. It’s high time for politicians of all stripes to stop with the divisive rhetoric. America is supposed to be a melting pot of different religions and races, but politicians, particularly Republicans, continue to use fear, bigotry and xenophobia as political fodder.

These slimy politicians above all else, want to win elections, and they will sink to continually lower levels in order to do so.

And now, a man who by and large was a respectable politician, has killed himself over it.

Insidious Insider Backstabbing Behind The Scenes Of Walker’s Casino Betrayal