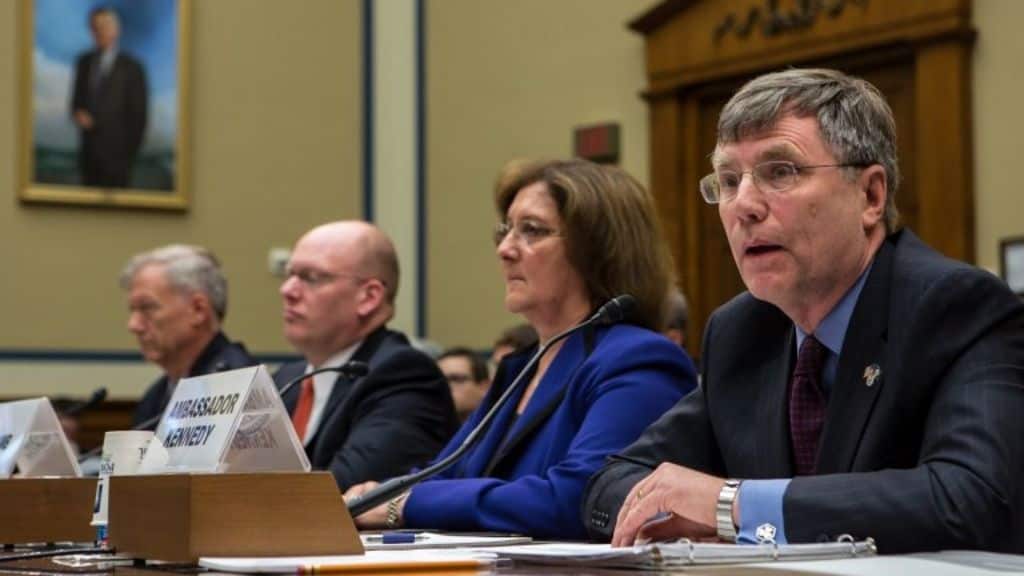 It looks like the GOP’s tendency towards history revisionism is continuing to bite the party in its collective ass.

The Hill published an article in 2012 showing exactly where Republicans in the House of Representatives stood on security measures for foreign embassies like the one in Benghazi.

Not at all surprisingly, it doesn’t reflect well on the Republican Party at all.

“Republicans have sought to cut hundreds of millions of dollars slated for security at U.S. embassies and consulates since gaining control of the House in 2011.

“Democrats are scrutinizing the GOP proposals in the wake of attacks on U.S. embassies and consulates in the Middle East, one of which saw Ambassador to Libya Christopher Stevens and three other Americans murdered.”

But if you’re as amazed at the audacity of House Republicans as I am, you haven’t seen anything yet.

“It is extremely distasteful that some ill-informed Democrat staff are using the instability and violence abroad to score cheap political hits.”

Because that’s not something we’d EVER witness amongst Republicans, ever.

It’s also worth noting that while the GOP was oh so indignant at the Democrats for questioning their embassy security budget cut proposals, we had then-Republican presidential candidate Mitt Romney attempting to pin the failures to stop the attack on the American Embassy in Benghazi on President Barack Obama.

Within the above Hill article, Romney adviser Richard Williamson made this statement:

“There’s a pretty compelling story that if you had a President Romney, you’d be in a different situation…For the first time since Jimmy Carter, we’ve had an American ambassador assassinated.”

That doesn’t look at all like a GOP candidate’s adviser looking to exploit a tragic situation for political gain…Nope.

Although this political maneuvering eventually blew up in Mitt Romney’s face, it did not stop Republicans from immediately claiming that President Barack Obama was able to return for a second term as president because he supposedly lied about Benghazi.

Far from back off of the politicizing the Benghazi tragedy, the has since GOP doubled down, working overtime to attack Hillary Clinton’s poll numbers. Despite being called out for this by Democratic Benghazi Committee members (and by Hillary Clinton’s campaign), the GOP trudged ahead anyway. Somehow, they imagined their “grand theater”, complete with stacks of email and paper-ripping, would get Americans on their side. Instead, they might have helped give Hillary Clinton a decisive boost.

It’s bizarre really, all the outrage that the GOP wants us to think they feel RIGHT NOW about what happened in Benghazi. Especially when one only need look back a few years to determine their security budget cuts might very well have weakened security at Benghazi prior to the attack.

Please meditate for a moment on remarks made by Rep. Jason Chaffetz (R-Utah). Chaffetz matter-of-factly justified the decision to cut embassy security funding to CNN in 2012, in the immediate aftermath of the Benghazi tragedy:

“Look, we have to make priorities and choices in this country. We have… 150,000 contractors in Iraq. We have more than 6,000 contractors, a private army there, for President Obama, in Baghdad. And we’re talking about can we get two dozen or so people into Libya to help protect our forces. When you’re in touchy economic times, you have to make difficult choices. You have to prioritize things.”

In 2012, Chaffetz acknowledged that he didn’t feel funding security in Benghazi was a priority prior to the attack. In 2013, Chaffetz joined a chorus of GOP politicians claiming Benghazi happened and was poorly addressed because the Obama Administration “misled” the public. In 2015, we have Chaffetz, now House Oversight and Government Reform Committee chairman, among those hoping to demonstrate that Hillary Clinton’s emails are a matter of serious concern. Not to mention working pretty damn hard to connect them the Benghazi attack.

“Violations of the Federal Records Act within federal agencies is something we take very seriously.

“The House Oversight Committee will work with Mr. [Trey] Gowdy and the Select Committee on Benghazi to further explore Hillary Clinton’s use of personal e-mails while at the State Department.”