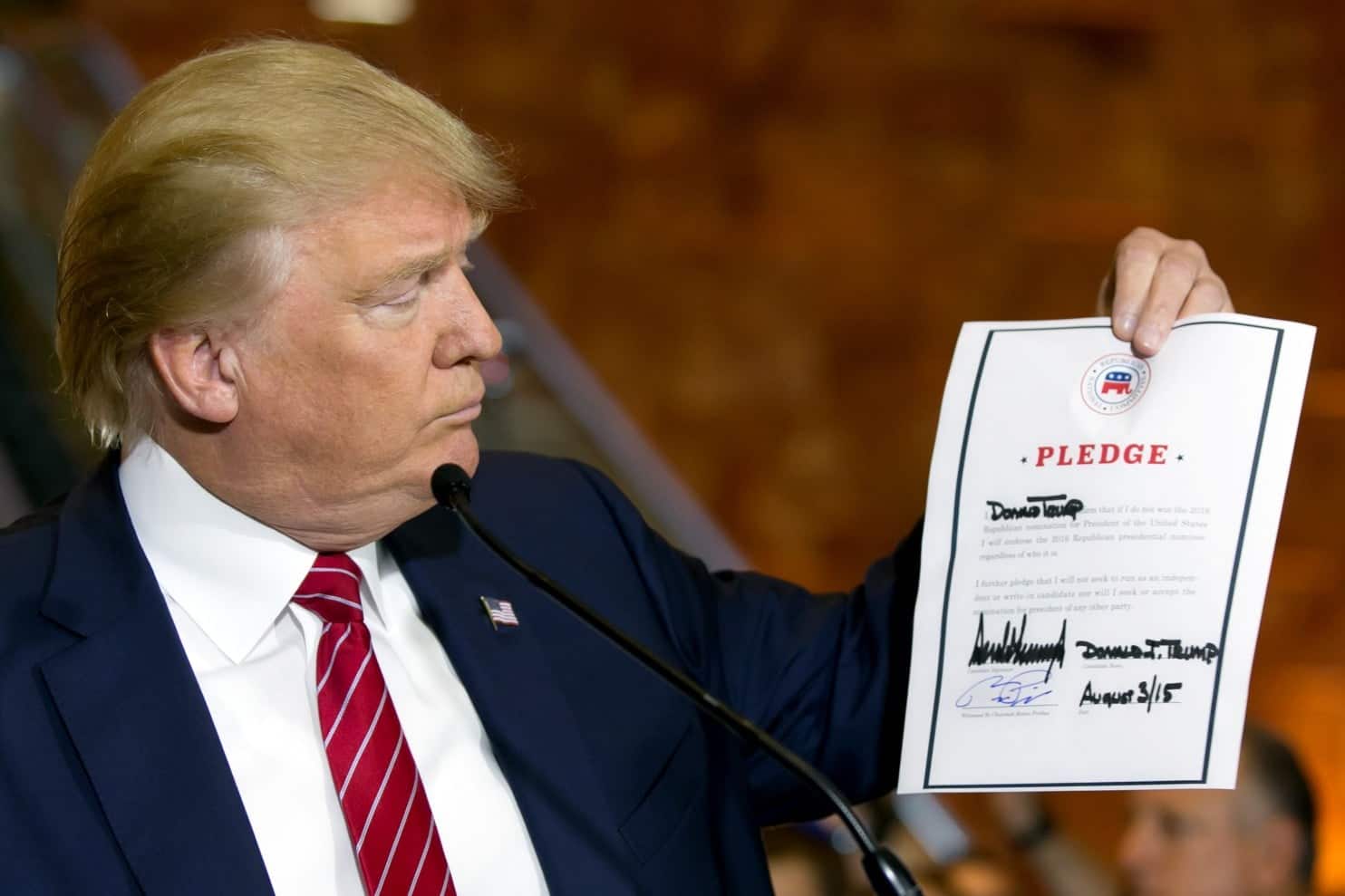 GOP officials are having major heartburn over Donald Trump’s refusal to say he won’t mount an independent campaign if he isn’t the Republican nominee. On Wednesday, they started oh-so-subtlely asking all their candidates to sign a loyalty pledge.

As of Wednesday night, John Kasich and Jeb Bush had signed, but who cares? If either man tried to run as an independent, the activity would measure a zero on the Richter scale.

Trump is the looming problem on the electoral horizon. He’s been slowly torturing the party with the prospect of a third-party run ever since the first Republican debate in August. Moderator Bret Baier asked candidates to raise their hands if they could not commit to supporting the eventual GOP nominee or to not running as a third-party candidate. One, and only one, raised his hand — Donald Trump, of course.

As if the roster of potential nominees isn’t enough of a detriment to them recapturing the White House, the possibility of a third-party run by Trump could destroy what is left of the party. After Trump siphoned off the disaffected, there might not be enough Republican voters left to elect a dogcatcher. Trump and the GOP nominee would go down in flames together.

GOP officials have been conferring with Trump for weeks, trying to convince him to renounce a third-party run. Pressure is also coming from South Carolina. The state party requires candidates to pledge their support to the eventual nominee in order for them to run in the primary. The deadline for doing so is Sept. 30th, so the billionaire has to come up with an answer about the loyalty pledge by then.

The answer may come sooner than that — like before the weekend. Trump has been dangling the possibility of making the pledge in front of party officials’ noses. On Thursday, he is to meet with Republican National Committee chairman Reince Priebus, specifically to discuss the topic.

Last weekend, while in Nashville, Trump hinted that he would soon make a decision on the loyalty pledge — and might even cooperate with party wishes — saying:

“I think a lot of people are going to be very happy.”

Of course, with Donald Trump, nothing can ever be taken for granted. The man loves to torment others, leaving them swinging in the wind. So the people who are ‘going to be very happy’ could well be the supporters who cheer every time he sticks his finger in someone else’s eye.

After all, wouldn’t signing the loyalty pledge move him onto the “establishment” side of the political scale? And wouldn’t that finally put the stake through the heart of the wildly improbably Trump campaign?