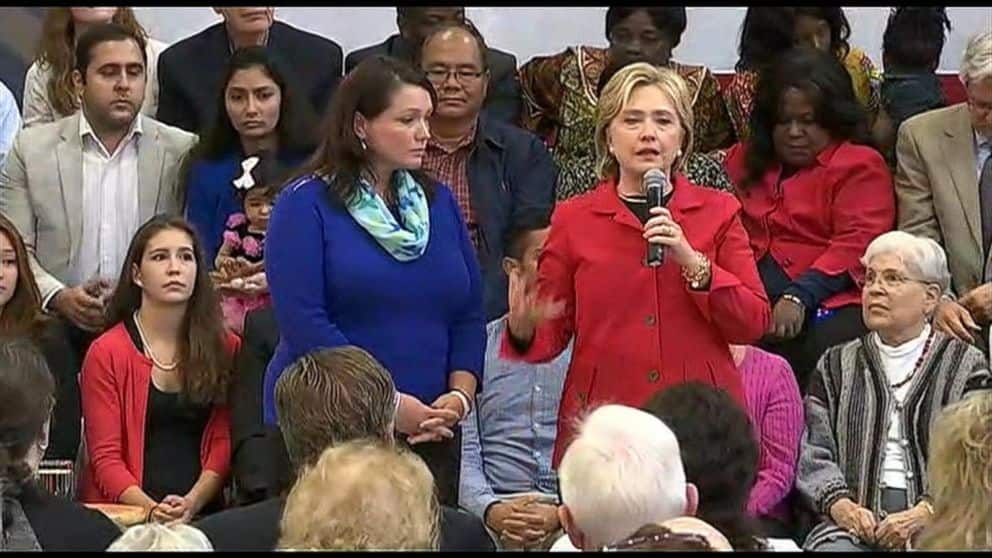 Someone has finally grown a pair and is standing up to the gun bullies that make up the National Rifle Association and their acolytes. Hillary Clinton has begun to change the discourse on common sense gun laws during her recent campaign stops. She’s not cowering from the bullies that are the NRA, the misguided right-wing politicians or the gun extremists who refuse to budge one inch or even participate in civil discussions about the issue. They do this all while blaming and profiting off the misery of shooting victims and survivors. Clinton, however, is jumping in with both feet. And not a moment too soon.

Along with her other talking points, which include fighting income inequality and celebrating rulings on healthcare and marriage equality, she is bringing up a topic that has become taboo in political forums for years – toughening our nation’s ever-loosening gun laws. Her biggest challenge – how do you reason with cowards who hold elected positions in the House and Senate?  These bought-and-sold politicians live in fear of the National Rifle Association. They fear the NRA’s lobbying power and the power they hold with the gun-owning population. They have peddled lies and misinformation while deflecting and ignoring national statistics that point overwhelmingly to gun-owners and non-owners alike supporting expanded background checks.

The NRA, they have money — and lots of it. The NRA spent $24 million during the 2012 election cycle in support of those who would vote to oppose any legislation that would lead to more sensible gun reform. It is difficult to reason with a group of people who refuse to see the truth, especially in light of the deadly gun violence of the past few years. The NRA wants us to live a fear-based, militarized lifestyle. They have no problem intimidating our government to advance their morbid agenda. The NRA uses mass shooting incidents as leverage to gin up fear among their supporters.

Here are a few statements from the NRA following some of our nation’s more recent mass shooting incidents, to illustrate what Clinton and other common sense gun reform advocates are up against:

Their response to the 2007 Virginia Tech massacre that killed 32 people and injured around two dozen more. The nation thought that tighter restrictions on guns would help prevent such tragedies, but the NRA:  “We won’t be pushed around,” insisted Bully-in-Chief Wayne LaPierre.

Following the July 2012 Aurora, CO movie theater slaughter of 12 people and injury of 58 others: “There is absolutely no correlation between guns and shooting deaths. Zero. None.”

Just six months later, when a mentally disturbed gunman slaughtered 27 people, including 20 small children at a school in Newtown, CT: The NRA argued schools needed more guns, for protection. They also added that parents who lost their 6-year-olds were politicizing their victimhood and serving as “human shields” for the gun safety movement.

Regarding the June 17 Charleston, SC massacre of nine worshipers in a church by a white supremacist: NRA board member blamed the Rev. Clementa Pinckney, the church’s pastor, for failing to arm his parishioners with handguns, rather than noting how appalling it is that a KKK-style racist can get a gun with no problem.

Why do they take this evil stance? To sell more guns. Which is actually quite a contradiction, since many independent polls following the Newtown, CT tragedy showed that 83-91% of those polled supported changes in the laws regarding background checks. Checks that would apply to people purchasing guns online and at gun shows. Checks that would ferret out whether a prospective buyer was a convicted felon, had mental health issues or was on a terrorist watch list.

“I’m going to speak out against the uncontrollable use of guns in our country because I believe we can do better.”

In the face of evidence that the political environment on guns has shifted in the wake of recent mass shootings — and of her determination to stake out liberal ground on primary insurgent Sen. Bernie Sanders (I-Vt.) — Clinton is not only initiating a debate about gun control but also vowing to fight the National Rifle Association.

A few days earlier, she said in Hanover, N.H.:

“We have to take on the gun lobby. . . . This is a controversial issue. I am well aware of that. But I think it is the height of irresponsibility not to talk about it.”

Clinton’s comments could raise the ire of millions of politically active gun owners. Wayne LaPierre, the NRA’s executive vice president, argued that the move could be dangerous for her. In his trademark condescending, misogynistic tone, he glibly quipped through a spokesman:

“We’ve been down this road before with the Clintons. She needs to read her husband’s book.”

La Pierre was referring to a passage in Bill Clinton’s book My Life where it was suggested that Al Gore might have lost the 2000 election based on backlash in states such as Tennessee and Arkansas thanks to Clinton’s successful 1995 ban on assault weapons. Unfortunately, that ban has since expired, and we have since learned that is not the reason he lost the election.

Who are the players in this life-or-death game?

The NRA: The NRA has spent 73 times what the leading pro-gun control advocacy organization, the Brady Campaign to Prevent Gun Violence, has spent on lobbying in the 112th Congress ($4.4 million to $60,000, through the second quarter of 2012), and 4,143 times what the Brady Campaign spent on the 2012 election ($24.28 million to $5,816). They have also had their henchmen in Congress continue to pass ridiculous legislation that prevents the CDC from doing research on the epidemic of gun violence in the U.S. and prevents pediatricians from mentioning gun safety to their patients.

The Sycophants: The Republican 2016 presidential candidates and those gun extremists who keep voting for them. This has become part of the fabric of the GOP orthodoxy: loudly opposing any type of gun reform.They will not even entertain the idea of discussion since they see the issue only as black and white. With them, they believe there is no middle ground – that it’s either all their guns are taken away… or they have no laws or restrictions on firearms whatsoever. Many gave speeches at the NRA’s spring convention and touted their high ratings from the group. The NRA scores them on an A through F grading scale.

“The Clintons pulled off the almost-impossible by giving us the background-check system and banning assault weapons. That’s something President Obama wasn’t able to do. Their political interest lies in owning, rather than obscuring, that accomplishment.”

The Facts: Despite polling results and statistics that prove the NRA wrong on basically every one of their talking points, they continue to mesmerize people into a fear-based state, having them believe that the more guns they have, the safer they will be.

The Voters and American Citizens: It is our responsibility to do our homework on the subject and not blindly follow those with a subversive agenda. Seek out the truth. Challenge ourselves to see other points of view. For anti-tax conservatives, consider the tax burden that gun violence takes on the U.S. economy. That tallies in at at least $229 billion a year, according to an analysis by Mother Jones. That includes emergency and medical care, prison and criminal justice costs, lost wages, insurance, legal fees, police investigations, etc. That’s about $700 per American per year. In a state like Wyoming that has a high rate of gun violence, it’s twice that. We, the taxpayers, are footing that bill.

“This is an important issue, and she believes that we cannot let partisan gridlock prevent us from continuing to seek ­common-sense safety measures.”