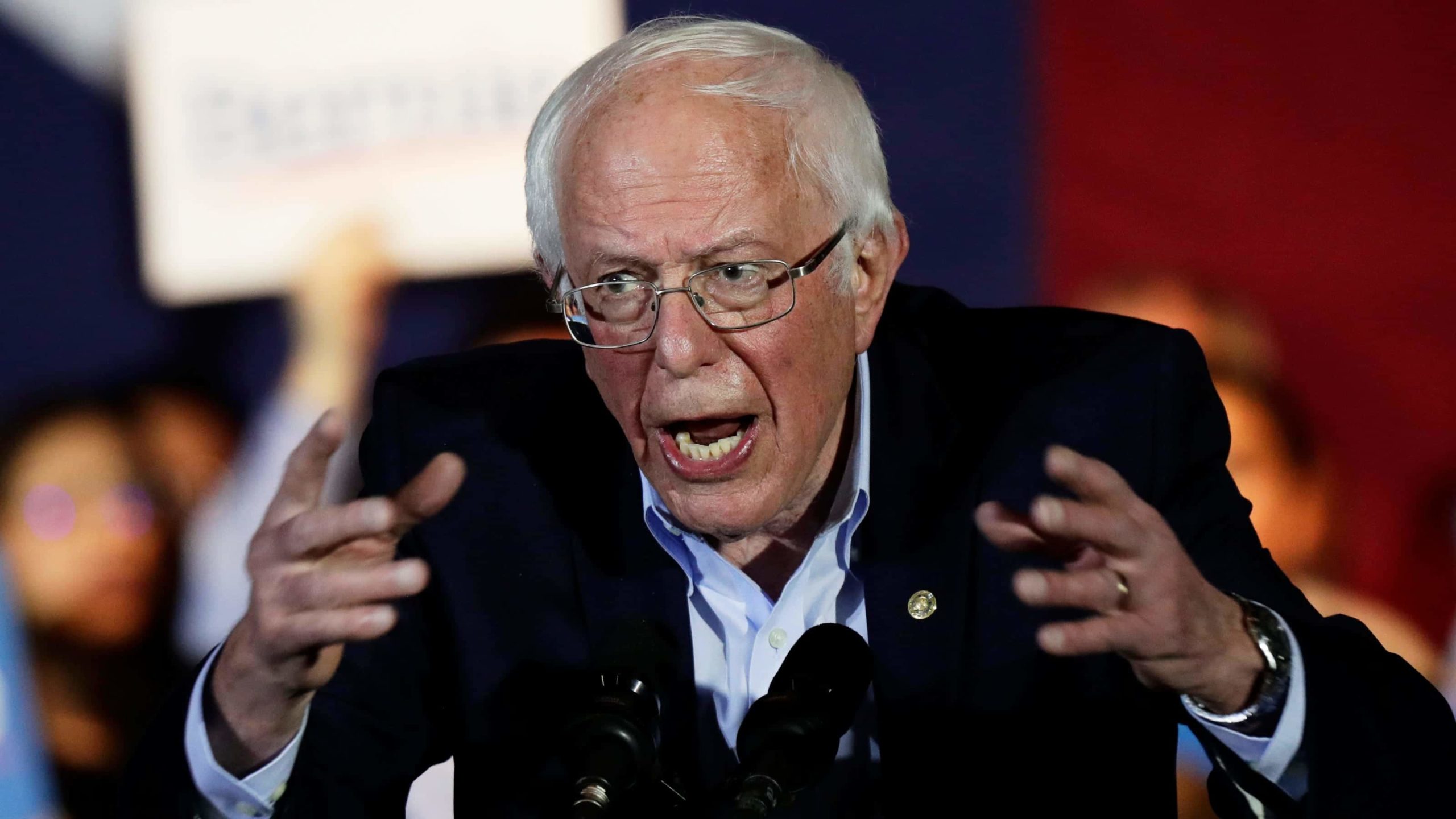 Sometimes it can be scary and confusing for kids when they’re faced with an unknown, like a politician who actually represents the regular people who voted for him. As you tuck them into bed, don’t be surprised if you hear questions like, “But what about the billionaires? Who’s going to speak for them?” or “Why is he so angry all the time?” or “Mom, why did you hit him?” We’ll get to that last one in a minute.

I find that the best way to address kids’ valid concerns about politicians is to ease them into it.

The last time we tried to explain a government shutdown to my 10-year-old he said, “Wow, sounds like they don’t know how to do their jobs. They should all be fired.”

There’s no telling what sort of blood lust this whole Bernie situation could unleash in our household and I’m betting your family is struggling with the same sense of unease. I’ve put together some answers to use when fielding common questions from your kids. You’ve probably been asking yourself some of these questions too, so don’t feel shy about talking to yourself about Bernie Sanders. We all do. It’s completely natural.

What does it mean when a politician “doesn’t lie”?

Well, this means that he or she is telling “the truth.” This is the type of behavior that one might expect from, say, your teacher or a librarian. I understand it can be confusing, trust me, it’s definitely confusing to most adults. What we’re used to is a sort of non-truth-jargon-bite and we nod and think, “Thank you, politician, for the nonsense that just came out of your face hole” and we get right back to eating our burrito(s) because that’s life, man.

I think you know by now that adults don’t really expect the truth otherwise why would we ask you if you’ve brushed your teeth and then accept your answer without making you breathe directly into our faces “just to be sure”? We’re used to being lied to. We like it. It’s soothing. So this situation is uncomfortable for us, too.

Just know this: You are not alone. We will get through Truthmageddon-Honestypocalypse-2016 together.

What is he so angry about?

If your kids have only seen Bernie during Senate Budget Committee hearings (and let’s face it, what kid hasn’t?), they might think he’s the angriest uncle in Angry Uncle Town. But we live in Vermont so we’ve seen Bernie all over the place, grocery shopping at our local market, walking down Church Street, or driving around town in his consistently-of-the-people car. He is our Jimmy Carter. He looks just like a regular guy doing regular guy things. In fact, not once have I ever seen him try to filibuster in the produce section or point at then flip out on someone at a 4th of July parade.

But turns out when you’re in Washington, D.C. trying to do your job there’s so. much. to be angry about. I’m guessing if any of us were blindfolded and dropped into Washington, D.C. and saw how the sausage is made, blood would probably shoot out of our ears like a human anger sprinkler. He hasn’t learned to stuff all that outrage down and just pave it over with teeth and haircuts like other politicians have.

For some reason he takes his job seriously, believes that people shouldn’t have to buy representation in their government and highlights issues most other politicians don’t really care about like taking care of veterans and our senior citizens, equal pay for women, the importance of family farms and the unknowns of GMOs, or dental care (dental care?! Yes, dental care!).

To sum up: Bernie is angry — but he’s not angry at you. It’s not your fault. This is just how Bernie and the establishment fight with each other. Maybe turn up your music when things get uncomfortable or we can go buy some headphones together?

Why does he make sense?

This is a tough one so let’s take this one slow. We know that you’ve never heard either of us say, “Hey, that elected official makes a lot of sense” or “They are using words I know and stringing them together in a way that forms sentences that I can understand.” So there is definitely going to be an adjustment period for all of us.

I think the best way for us to approach this is to think of Bernie as someone who is here to teach us something. Like an alien. He just says it like it is. In our native language. So maybe he’d be good at this President thing? One time, I heard that government is supposed to be of the people, by the people, for the people. Waaaaiiiit, that can’t be right.

Why isn’t he telling you what do with your body?

Right? I know. For some reason, he believes that women like me can make health care decisions with our health care providers instead of with our employers or the government. Weird.

I know I personally prefer to trust the crafting of policy re: my lady parts to old men who wouldn’t know a vagina unless they were renting it by the hour. But don’t worry, I’m sure this is an anomaly. And by the time you’re all grown up you can take your 76 cents on the dollar and pay your robot Dr. President for all of your gynecological needs. *starts sobbing*

Mom, why did you smack him?

Look, we were on the same flight back to Burlington and we were waiting for our gate-checked bags. His was the first to come out. Like, immediately. I guess that’s what happens when you’re a Senator who flies coach.

One, the least the airline can do is put your bag on the top of the heap. Two, another passenger might smack you on the arm and say “Lucky!” as if you just won the raffle at the school fundraiser. Three, that passenger might let her mouth drop open and think “Oh my God, did I just hit a U.S. Senator?”

But it’s hard to ruffle Bernie. He just took his briefcase, his carry-on and set off in his Bernie way up the jet bridge. No assistants, no photographer, no staff — just him. And that’s what you should think of when you think about him. He’s a guy doing a job, like normal people. So when you see him it’s easy to feel like you know him. But that doesn’t mean you should hit him. Don’t ever hit him.

But why is he even bothering when he can’t win?

I’m gonna lay this out real plain and simple to you, kids. None of us have a chance in H-E-double-hockey-sticks of achieving our biggest, boldest, bravest dreams unless we do one thing: try.

Without underdogs there would be no upsets and no legends. It’s exhilarating to see people try to win against all odds because most of us identify with that feeling. We’re so small, we’re just one person in an ocean of people. And all those other people? Taller, richer, smarter, more talented, better connected, nicer teeth, snazzier suits. How could we ever be the one who makes the shot, writes the book, gets the job or the girl or the life we’ve always wanted? Why us?

But why not us?

As it turns out, winners being the winningest winners and winning everything they can win? It’s boring. And in politics it happens a lot. People born of privilege and connections float up a Rolex-studded ladder and then have to take classes in how to eat a hot dog in front of cameras like the lowly.

So what we talk about when we talk about Bernie is this — it’s never too late to go for it. Being honest and true to your beliefs will never fail you because you will always sleep well at night. Working hard, really truly working hard, still means something.

Defining your victories by the scorched earth of your enemies is a depressing and soul-crushing way to live your life. And even if you try and fail, at least you tried. You’ve added your voice to the conversation. And that separates you from everyone on the sidelines who never tries and just criticizes the try-ers from inside their own mouths. There’s nothing worse than that. Just ask the guy laying on the couch covered in nacho cheese dust telling Tom Brady how to do his job. Suit up or shut up, that guy.

But Mom, should we underestimate him?

“I think people should be a little bit careful underestimating me.” — Bernie Sanders, April 29th, 2015

You heard the man. Any more questions?

Clinton Lines Up On The Same Side As Cruz, Bush, and Boehner — Support Israel, Not Obama

Clinton Lines Up On The Same Side As Cruz, Bush, and Boehner — Support Israel, Not Obama