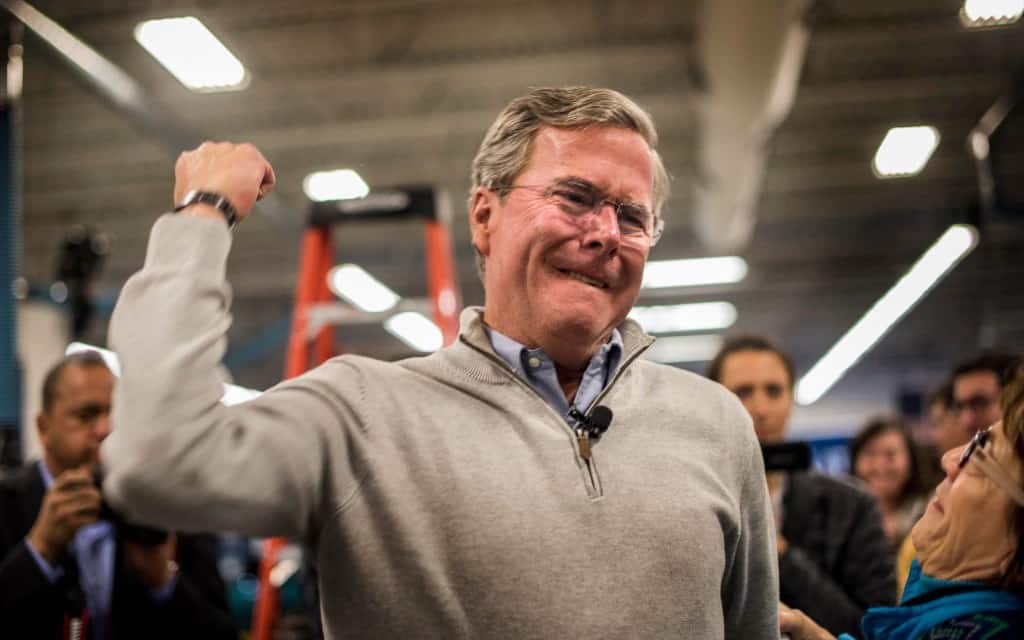 Jeb Bush is polling in second place, way behind front-runner Donald Trump. Scott Walker and Mike Huckabee are within spitting distance behind him. Jeb was ‘supposed to’ be the party’s front-runner. Politico reports that Bush recently told a donor over the phone that he thinks Donald Trump is an “asshole.”

Among Republicans, Bush has raised the most money, far and away, for his candidacy. This reflects his family connections. And yet, as FiveThirtyEight points out, he is severely lacking in big name endorsements. The statistics gurus at Nate Silver’s blog quantified the value of early endorsements, and found Jeb lagging way behind.

The party base is currently flocking to Donald Trump. Trump is likely to be remembered as this campaign’s Michelle Bachmann. Bachmann surged early in 2011, before being overtaken by a series of clowns, and finally Mitt Romney, Ol’ Moneybags, won the nomination. Bush’s position is similar to that of Romney in 2011, but he’s in much worse shape. He is weaker than Romney was, he has more opponents, and many of them are stronger than the ones Romney faced.

The race is so chaotic, because Bush is in it.

It’s important to remember that Big Brother Bush left office with a 70% disapproval rating. That was the highest score of Americans souring on a president ever recorded. Democrats loathed him, the vast majority of independents opposed him, and even quite a lot of Republicans were sick of George W. Bush by the time he left office.

Then-Senator Obama’s political genius was in harnessing the nation’s anti-Bush sentiment in 2008. By making the race about change, and being thematically and substantively the most anti-Bush candidate, he surged past Hillary Clinton, and forced John McCain to tie himself in knots.

George W. Bush’s extreme unpopularity has waned over the years, but the idea of a Bush-like president remains unappetizing for the majority of Americans. Jeb Bush’s candidacy forces Americans to think about the 8 catastrophic W. Bush years in detail all over again. And they have an instinctive negative reaction to a potential repeat. No matter what Bush says about being his ‘own man,’ he surrounds himself with his brother’s advisers and embraces many of the same policies. Americans aren’t stupid enough to think that a scion of the Bush dynasty would radically depart from the family’s political agenda.

Republicans look forward to the end of the Obama era. They want someone fresh who rose to stature during that era. Jeb Bush was in semi-retirement for most of the last decade. And he is inherently a throwback to his brother.

Being a Bush comes with extraordinary privilege, but also extreme unpopularity. The Bushes use their privilege to impose popularity through relentless propaganda in a way that Noam Chomsky would call ‘Manufacturing Consent.’ But the nation understands the game now, and being a Bush remains toxic. Bush can’t escape that, no matter what he says or does. His presence in the race makes him a frontrunner based on the privilege of his family dynasty, but it also makes him weak, given his extreme unpopularity.