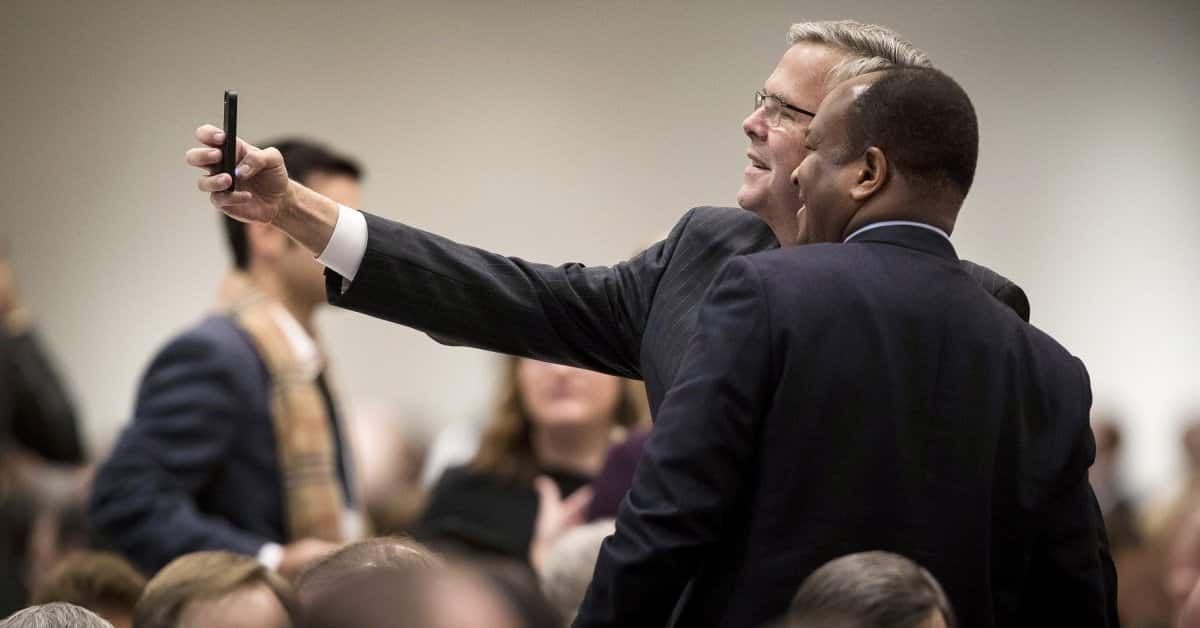 “to lose the primary to win the general without violating your principles.”

“Hark! A Republican of principle! Truly, the second coming of Teddy Roosevelt is upon us!,” I hear you calling out. Keep your pants on. This has nothing to do with principle. But, reading between the lines, this IS Bush’s roadmap to the White House.

It seems nonsensical to lose the primary in order to win the general. Indeed, no less than conservative commentator George Will called him out on it,

“This sounds like a baseball strategy that requires stealing first base. There is a reason this has not been tried: the rules of the game.”

But Will’s understanding of the rules of the game is pre- Citizens United and McCutcheon. The last presidential election was played on a different kind of field. Who controls the lead controls the money. Who controls the money controls the race. Romney’s Goliath money advantage crushed one David after another. Having come in second to McCain in 2008, Romney entered the 2012 race with presumptive front-runner status. The Tea Party emptied a clown car of challengers in a primary in which the rank-and-file and activists were deeply unsatisfied with the idea of a Romney candidacy. One by one, they rose against Romney. And one by one, they all got shot down, leaving Romney with the nomination. He essentially lost the primary in the sense that most conservative voters didn’t want Romney, but with $100 million from Sheldon Adelson and the widespread rumor that the Koch Brothers promised him $100 million if he picked Paul Ryan as his running mate, Romney was able to drown out his competitors with a flood of ads paid for by billionaires, with cash sloshing through legalized slush funds.

The 2012 primary was loaded with circumstantial evidence that Romney’s nomination was inevitable. Early on, Tim Pawlenty attacked Romney with the line “Obamneycare.” This was a brilliantly pithy way to underline Romney’s biggest weakness with Republicans, which could have been fatal in the primary. It was the only serious attack levied at him by a fellow Republican. Pawlenty refused to repeat the attack line, and quickly bowed out of the race. His explanation for why amounts to neurotic blathering. Herman Cain started eclipsing Romney on the absurd 9-9-9 policy plan. Suddenly, big guns were rolled out in the form of a litany of women who accused him of sexual harassment, and he was toast. Big establishment conservatives who could easily have overtaken Romney, such as Chris Christie and Jeb Bush, demurred, leaving Romney the front-runner. Big money decided the 2012 Republican nomination. Did the same big money also give establishment conservatives the memo that Romney was the guy? And did Pawlenty not get the memo, until he crossed a line, and then he got the memo? And did Herman Cain never receive the courtesy of getting the memo?

Romney lost the primary by getting mauled by a pack of conservatives. This was supposed to make his slide to the center much easier. But he was such a muddled candidate that he lost the general election anyway. So, how does Jeb lose the primary but win the general?

Jebbie is a centrist, a maverick, a man who goes his own way. He’ll challenge the party rabble and bring people together, just like Romney and McCain, and even big brother Bush who was a “compassionate conservative” way back in 2000. Except that’s all baloney. He breaks with party orthodoxy on immigration and Common Core. The first is an important issue to the presidency, the second is peripheral to how a White House would be run. Otherwise, he’s fundamentally conservative, and his record shows it. This is key; he’s conservative enough to get the backing of big money donors who don’t need to worry that he would do anything crazy like regulate Wall Street or energy, expand social services or shrink the military. Whatever else he might do or undo is fine with the big wallets. And he’s “centrist” enough because of a minor streak of breaking with his party to be a considerable force as something along the lines of a ‘reasonable conservative’ in the general election.

So when baby brother Bush says he’s actively exploring running for the presidency, what he means is the secret primary is already in full swing, and he’s seeking anointment by money. Some of the Republican party’s biggest donors are privately trying to clear the potential field to set up one major establishment candidate as the front-runner to avoid a bruising brawl that would help the Democratic nominee. They are looking at Mitt Romney, Chris Christie and Jeb Bush. Let’s be honest, Romney is washed up and Christie Christie’s road to the White House is a bridge over troubled water. By the billionaires’ calculus, that leaves Jeb Bush. And he has been trying to demonstrate that he would be a good investment all year. He raised a million dollars for Republicans in the midterms, has pow-wowed with big bundlers, and is becoming their darling.

So Jeb Bush’s plan is to cozy up to the big donors behind the scenes. Then, with their cash, he will conduct a puppet show with Tea Party rabble candidates who will sling non-sequitur invective at him but never seriously challenge his record. If any of them do seriously challenge him, they will be torpedoed with lightning speed. He will “lose the primary” not on principle, but on spectacle, by showing the nation that he’s not as conservative as the radical alternatives nipping at his heels. He will then glide into the nomination sounding reasonable and centrist. The rank-and-file Republican primary voters will be severed from the process. Meanwhile, the donors will rest assured that Bush is a hard right politician who will not flinch to shed blood for their interests.

The American people need a third Bush president like they need their car to stall while straddling railroad tracks. But the hoodwink has already begun in earnest.