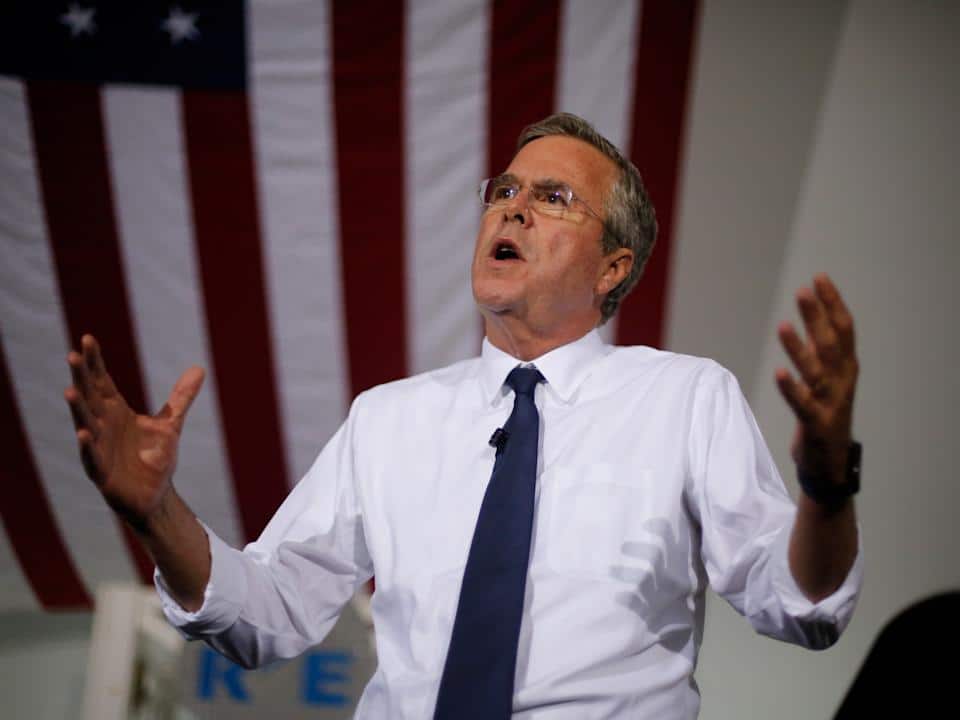 On Tuesday, Jeb Bush called into Sean Hannity’s syndicated radio show, the friendliest of media environments, in order to do damage control. On Monday night, Jeb told Fox News’s Megyn Kelly that he would have pulled the trigger and invaded Iraq, even knowing what we know now. For obvious reasons, that was a very stupid thing for him to say. His only defense was that he had not understood the question, and thought Kelly was asking him if we would have invaded Iraq based on what was known at the time. When Hannity gently rephrased the question to give him another shot at it, Jeb demurred, but trotted out that oldest of dodges, “mistakes were made.”

Jeb is caught in a horrendous political double bind. He needs to convince voters that he’s not his brother, and he needs to convince donors that he is his brother. He also needs the two groups not to hear what he says to the other. Unfortunately, modern communications won’t let him pull off secretly telling two groups the opposite story. He apparently he can’t see a way out of it. It is mind-boggling that his campaign team wasn’t better prepared for it, and that the candidate himself can’t offer a stronger response to it than to dodge it, vacillate, and claim that his hearing isn’t too good.

When Jeb first unofficially launched his undeclared campaign, he announced, “I am my own man.” The statement was packaged in a “shoe-horned” way that seemed engineered to stimulate the press to maximize discussion of it. The comment is a way of signalling to voters that he rejects his older brother’s cowboy foreign policy, but he doesn’t want to say that, because, well, he’s still his brother. A key component of Jeb’s strategy is to reject and distance himself from George W. Bush as much, but as gently, as possible.

Jeb planned for one of the most aggressive pre-announcement fundraising drives in history. He wanted to dominate the Republican primary field before he even declared his candidacy with a hegemonic amount of money. He is tearing at the already tattered campaign finance rules to do it, and the FEC is unlikely to stop him.

The money that Jeb really needs is that of Sheldon Adelson, the man who wrote a check with five zeroes at the end to Mitt Romney in 2012. He has become the Republican party’s kingmaker, along with the Koch brothers, Paul Singer and a small cabal of other billionaires. But Bush’s fundraising strategy is not going according to plan, and Adelson seems to be slipping out of Jeb’s grasp. According to the National Review,

“I think he’s lost the Sheldon primary,” says the leader of a top conservative group.

The bad blood between Bush and Adelson is relatively recent, and it deepened with the news that former secretary of state James Baker, a member of Bush’s foreign-policy advisory team, was set to address J Street, a left-wing pro-Israel organization founded to serve as the antithesis to the hawkish American Israel Public Affairs Committee (AIPAC).

J Street has routinely staked out liberal views anathema to those held by Adelson and his allies. Adelson sent word to Bush’s camp in Miami: Bush, he said, should tell Baker to cancel the speech. When Bush refused, a source describes Adelson as “rips***”; another says Adelson sent word that the move cost the Florida governor “a lot of money.”

By reaching out to a group of liberal Jews, Jeb may have cost himself Adelson’s support, and potentially the nomination itself. Even though Jeb has people like old school neocon Paul Wolfowitz on his foreign policy team, James Baker once criticized Israeli settlements as an impediment to peace, and is therefore, persona non grata. Jeb refused to kiss Adelson’s ring with a purely pro-Israeli-right-wing foreign policy team, so Adelson is now leaving Jeb out in the cold.

At some point, Jeb must have realized that he’d made an enormous blunder by pissing off Adelson. So he sent his brother out to try to win back conservative Jewish donors. George W. Bush addressed an off-the-record fundraiser, attended by Adelson and others, in which he trashed President Barack Obama’s negotiations with Iran. Bush’s comments were specifically calibrated to pander to Adelson and his allies. At the fundraiser, Jeb aides handed out buttons with “Jeb” written in Hebrew.

The situation is so desperate that last week, Jeb said himself, shockingly, that his brother W. is one of his prime foreign policy advisers. This statement indicated that Jeb is trapped. He is not winning over the billionaires who sympathize with the Israeli right, who will bankroll a winning campaign. For his campaign, this is existentially worse than tying himself to his extremely unpopular brother in the minds of voters. His spokesman, Tim Miller, while trying to downplay the comment, revealed the motive behind them,

“Governor Bush has said before that his brother is the greatest ally to Israel in presidential history, he admires his stalwart support for our ally, and that is in line with his commitment to standing with Israel in the face of great threats to their security and our own,” Miller said in a statement Thursday.

It may be that the billionaires just don’t like Jeb, because they don’t think they could control a Bush, with his own dynastic empire, the way they could control a shiny young senator. Either way, his candidacy is taking, and he’s running out of time to change its trajectory before he has to decide whether to declare and enter the race hobbled by donor problems or bow out.

By trying to run away from his brother for the benefit of voters, Jeb alienated the conservative pro-Israeli billionaires who want him espouse W. Bush’s neocon, interventionist principles. By trying to win those donors back, Jeb is wrapping an industrial chain around himself and his brother. And the chain is welded to an electoral anchor.