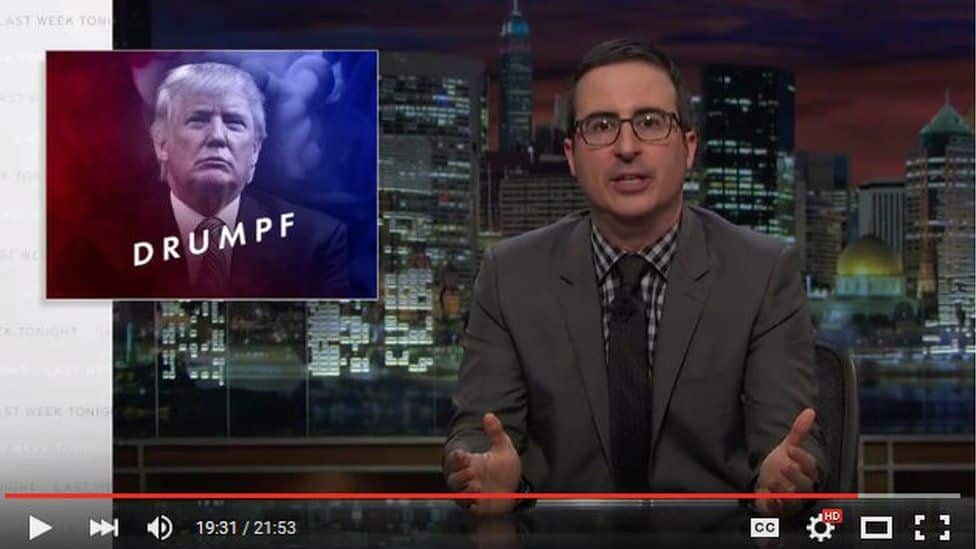 “You Can Hold His Feet To The Fire, But He’ll Stand There On The Stumps Bragging About His Fireproof Foot Skin.”

If it weren’t for late night shows hosted by comedians, it’s possible no one would be taking Donald Trump to task quite like John Oliver just did. In fact, John Oliver just raked Trump over the coals on his show Last Week’s Show Tonight, and every second of it was fantastically brilliant.

“At this point, Donald Trump is America’s back mole. It may have seemed harmless a year ago, but now that it’s gotten frighteningly bigger, it is no longer wise to ignore it.”

Oliver acknowledges that Trump has a lot of support. The main reasons people seem to support the GOP’s frontrunner tends to fall into four categories: He’s telling the truth, he’s funding his campaign, he’s aggressive and strong, and they think he’s an incredibly successful businessman.

Oliver points out that Trump is only appealing until you take a closer look, much like, as he says, “having a chimpanzee — it seems fun, but someday Coco is going to tear your fucking limbs off.”

First, John Oliver goes after the claim that Trump “tells it like it is.” Oliver points out that Trump’s Politifact file contains a 78 percent mixture of “mostly false, false, and pants on fire ratings.”

Oliver says he’s also witnessed Trump lie firsthand when the GOP frontrunner went after his old boss Jon Stewart on Twitter when Trump mocked the former host of The Daily Show for changing his last name from Lebowitz, then later said he never made fun of Stewart’s last name. Trump said in the tweet, “he should be proud of his heritage.”

Oliver also was the subject of one of Trump’s lies when the billionaire said he turned down a chance to be on Oliver’s show four or five times. Oliver says not one person from the show had even accidentally invited him on. John Oliver described this moment as “destabilizing” to be part of such a “confident” lie.

But The Gloves Come Off When John Oliver Decimates Donald Trump On The Point That He Is Tough And Aggressive.

When people claim Trump is aggressive and tough, Oliver says:

“I’m not sure about that, because for a tough guy he has incredibly thin skin.

“Back in 1988, SPY magazine called him ‘a short-fingered vulgarian’ and ever since the editor Graydon Carter said he receives envelopes from Trump always with a photo on which he circles his hand to highlight the length of his fingers, usually with a note that says ‘See, not so short!’

“Look, look, his fingers seem fine, but that very fact that he’s so sensitive of them is absolutely hilarious. As is the fact that those notes were apparently written in gold Sharpie which is so quintessentially Donald Trump; Something that gives the passing appearance of wealth, but is actually just a cheap tool.”

Oliver says Trump’s appearance of aggression also comes from him constantly threatening to sue people, but those end up being empty threats too. And let’s not forget about Trump’s fear of tough questions from Megyn Kelly at the first GOP debate, which later caused him to no-show at the debate for the Iowa Caucus.

Next, Oliver points out that perhaps Trump’s biggest selling point is his success. Oliver shows a reel of clips of Trump telling crowds of people how great he is, saying things like, “I’m really rich,” and, “people love me, and you know what, I’ve been very successful,” and “I went to an Ivy League school, I know words I have the best words.”

But Oliver shows that much of Trump’s success is because he inherited millions of dollars from his father and with that kind of leg-up in the system, it’s hardly an incredible feat that Trump is worth what he’s worth today (whatever that may be because he won’t release his tax returns).

While Trump has more wealth than the rest of us will likely see in our entire lifetimes, he’s also lost a lot of money, and that is something America needs to be careful of. One of Trump’s most recent cons has him smack in the middle of a lawsuit for Trump University, which conned “students” out of tens of thousands of dollars.

Most importantly Oliver says that no matter how you can demonstrate Trump’s failures, it never seems to matter.

“You can hold his feet to the fire, and Trump will stand there on the stumps, bragging about his fire-proof foot skin.

“And that may be because he has spent decades turning his own name into a brand — synonymous with success and quality. And he’s making himself the mascot for that brand, like Ronald McDonald or Chef Boyardee. And that is who we’ve seen in The Apprentice, Wrestlemania and Home Alone 2. But if he’s actually going to be the Republican nominee it’s time to stop thinking of the mascot and start thinking of the man.”

John Oliver says that no matter what your opinion of Marco Rubio or Ted Cruz may be, at least we know where they generally stand. With Donald Trump, his stances and positions on issues are vague and seem to swing depending on his mood (like his net worth). To give an example Oliver points out Trump’s most recent swing on former KKK Grand Wizard David Duke, a white supremacist who told other white supremacists they must vote for Donald Trump. Trump claimed not to know who Duke was even though last year he disavowed Duke’s endorsement, and called him a racist and a bigot.

Oliver says this is key:

“The scary thing is we have no way of knowing which of his inconsistent views he will hold in office. Will he stand by his statement that ‘vaccines are linked to autism’? Or his belief that Mexico is sending us rapists? Oh and what about that plan he had to defeat ISIS? (Shows clip of Trump saying that the US has to kill ISIS’s families) That is the frontrunner for the Republican nomination advocating a war crime.”

John Oliver says that private individuals are allowed to change their minds, but if Trump is sworn in as president on January 20, 2017, he says that is the day his opinions are going to matter.

“And you will remember that date because it’s the day time travelers from the future will come back and try and stop the whole thing from happening.”

Lastly, and this is the greatest part of the segment, John Oliver points out that Donald Trump’s family’s real last name used to be ‘Drumpf’ and he says from now on, we need to divorce ourselves from the Trump brand name which gives the illusion of success and quality, and start thinking of Donald Trump as ‘Donald Drumpf.’

“Drumpf is much less magical. It’s the sound produced when a morbidly obese pigeon flies into the window of a foreclosed Old Navy. ‘Drumpf’ is the sound of a store brand bottle of Root Beer falling off the shelf of a gas station mini mart.

“And it may seem weird to bring up his ancestral name, but to quote Donald Trump, ‘He should be proud of his heritage!’

“Because Drumpf is much more reflective of who he actually is. SO if you are thinking of voting for Donald Trump, the charismatic guy promising to ‘Make America great again.’ Stop and take a moment to think about how you would feel if you just met a guy named Donald Drumpf — a litigious, serial liar with a string of broken business ventures and the support of a former Klan leader, who he can’t decide whether or not to condemn.”

John Oliver announces that he wants to #MakeDonaldDrumpfAgain, and bought the website donaldjdrumpf.com, which sells hats at cost with the slogan on it, and also has a Chrome extension that will change any mention of Trump’s name in your browser to Drumpf.

Oliver believes this is the only way to break the spell of Trump.

And while this may seem silly, remember, John Oliver is the comedian who successfully incited change in topics ranging from bail requirements to the Miss America pageant for falsely claiming they gave away millions of dollars in scholarships to civil forfeiture laws. He’s funny, but he’s opened our eyes to serious topics in our country.