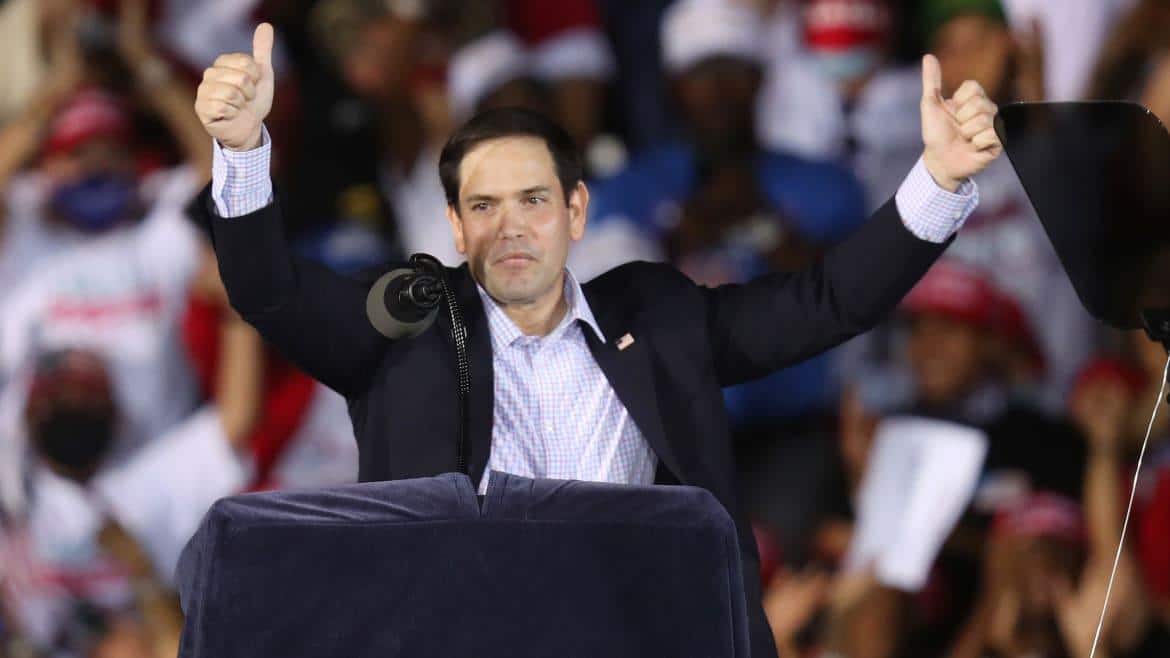 First House Speaker Paul Ryan (R-Wisc.) says mass shootings are no reason to “trample” on people’s gun rights, now Sen. Marco Rubio (R-Fla.)  defends selling guns to terrorists on CNN. On Sunday’s edition of State of the Union, Jake Tapper asked Rubio why he voted against a gun bill on Thursday that would have banned people on the FBI’s terrorist watch list from buying guns and explosives.

Rubio insists that barring people on the terrorist watch list would be doing gun lovers an injustice because so many folks have done no wrong, and just don’t belong on that watch list.  Marco Rubio then ran through a litany of lame excuses for how patriotic, non-terrorist Americans can wind up on the FBI’s terrorist watch list through no fault of their own. sometimes, Rubio explains, you’re not even on the list, the FBI just wants to chat with you because they apparently don’t know where you live.

“Sometimes you’re only on that list because the FBI wants to talk to you about someone you know, not because you’re a suspect.”

Sometimes perfectly innocent people — like the late Sen. Edward Kennedy (D-Mass.) — wind up on the airports’ no-fly list because they have the same name as a suspected terrorist, Marco Rubio believes.

“A very significant number of people on that list are on there because they have names similar to somebody else.”

Strange how Republicans demonstrated no such care for the innocent when then locked people up in Guantanamo Bay with no due process. When Jake Tapper pressed the presidential hopeful on whether he really thinks enough of us are wrongly added to the FBI’s terrorist watch list to merit concern, Marco Rubio stated:

“If these were perfect lists, that would be one thing. But there are over 700,000 Americans on some watch list or another that would all be captured under this amendment the Democrats offered. And that’s the problem.”

Really? 700,000 of us are on “some watch list or another?” That sounds rather far fetched.

There’s just one problem with Marco Rubio’s reasons for why we should allow suspected and actual terrorists buy guns: They’re a pack of lies. Politifact declares his count is waaaay off-base.

Rubio’s count is way off. The number of Americans on the consolidated terrorist watch list is likely in the thousands, not hundreds of thousands.

While they do not have access to current data, a 2011 FBI fact sheet reveals that only around 8,400 American citizens and legal residents were on the terrorist watch list.

A Terrorist Screening Center spokesman declined to comment on the watch list’s current size, but we found an estimate on a 2011 FBI fact-sheet that put it at 420,000 individuals. Of those, only about 8,400 were American citizens or legal residents. The no-fly list subset included about 16,000 names, only 500 of whom were Americans.

Meanwhile, The Intercept, an investigative online publication, estimates that around 700,000 people total — not the 700,000 Americans Marco Rubio claims — are on the FBI’s terrorist watch list.

But there’s no way that the number of Americans on the list has grown to 700,000, said Timothy Edgar, who oversaw civil liberties and national intelligence issues, including the terrorist watch list, under Presidents George W. Bush and Barack Obama.

“Rubio is almost certainly off by orders of magnitude,” said Edgar, now a visiting fellow at Brown University.

Martin Reardon, the former chief of the FBI Terrorist Screening Center’s operations branch, adds that he doubts the list includes more than 10,000 U.S. citizens and legal residents total. While some people fall between the cracks, Edgar insists it happens less often than it used to, and that there is now a reasonable and efficient process for redress. Marco Rubio has only received $4.950 from the NRA, but apparently, that’s enough to keep him in their pocket.

The folks at Politifact then — rather generously — rated Marco Rubio’s claim “mostly” false. Here’s the video with Marco Rubio explaining why he believes we should allow people on the FBI’s terrorist watch list to buy guns.