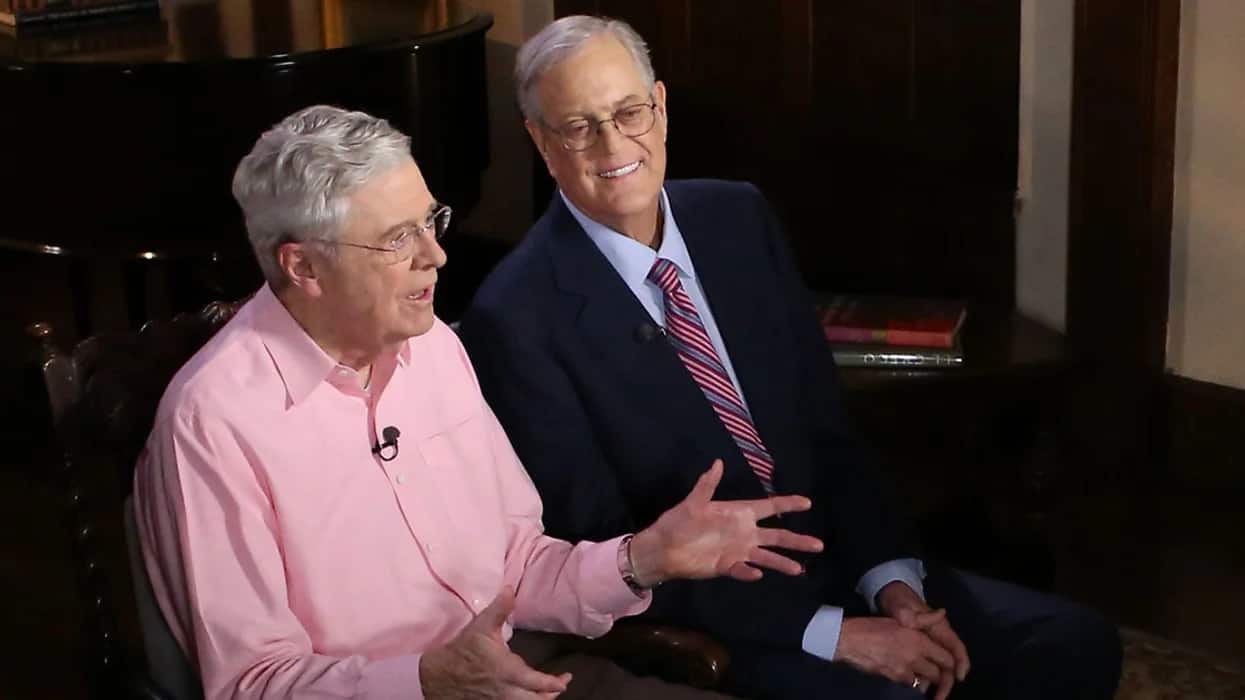 According to an alarming Opensecrets.org report, members of Congress who voted in favor of constructing the Keystone XL pipeline received a LOT more cash over the course of their careers from the oil and gas industry than those who voted Nay.

“Over the course of their careers, those 59 [Senators who voted in favor] took in over $33 million in campaign donations from the industry, compared to the approximately $4.2 million received by the 41 who successfully blocked the bill’s approval. On average, those voting for Keystone have received $572,000 from oil and gas interests, compared with just $103,900 for those voting against it.”

In the House the difference was “even more stark”:

Thebreakdown of oil and gas industry contributors over the last two years reveals that Koch Industries has been, by far, the most generous, doling out more than the combined total of the next three donors, Ken Davis Finance, Chevron Corp, and Exxon Mobil.

The politicians who had received the most largesse were among the pipeline’s most enthusiastic supporters. For example, Ted Cruz, whose biggest contributor by far was Koch-funded Club For Growth, argued

“If you’re a Birkenstock-wearing, tree-hugging Greenpeace activist, you should love the Keystone pipeline,”

Because, clearly, his target audience was environmental activists while he was addressing the Heritage Action’s Conservative Policy Summit. He also argued that the solution to Native American poverty was to pump gas through their territory. If he bothered to ask them, he would get a decidedly different perspective. The Lakota and Sioux who would be affected by the pipeline consider it an act of war and have vowed to close their borders to its construction.

Ted Cruz also wants to expand fracking, drilling on Native and public lands, offshore exploration, end regulations on crude oil and coal exports. The Kochs and the oil and gas industry get all this from a freshman senator with a bullhorn capable of shutting down the government, for just a few measly hundred large.

The Kochs’ influence over Congress is so vast, that when they lined up all their Congressional minions, they fell only one vote short of the 60 needed in the Senate to overcome a filibuster and get the bill to the President’s desk. Keystone XL would move Canadian oil through at least 6 US states, over 2,000 miles, to refineries on the Gulf coast, and international markets. The pipeline has virtually no tangible benefit for the American people or government. But because Koch Industries is the largest foreign lease-holder of Canadian oil sands, it stands to make billions of dollars. The Republican Party, joined by a small minority of Democrats, are determined to help them do so, regardless of any other consideration.

This is exactly the kind of scenario–an individual rich donor influencing an entire field of candidates with nearly limitless donations–that Chief Justice John Roberts assured us was “divorced from reality” when he ruled on McCutcheon v. FEC in April.

Indeed, our current reality IS divorced from reality. It is surreal that our representatives gorge themselves at a trough of endless dirty, dark money, laundered legally, so that they can advertise themselves for votes, and then completely ignore the will of their constituents. It is fantastical that those sworn to uphold the institutions of the world’s oldest continuous democracy are devoid of principle and mindlessly dance on strings of gold. It is unbelievable that the richest, most powerful nation on earth is governed by the will of a handful of unsatisfied hyper-rich intent on looting civilization lock, stock and barrel. It is Mad Hatter logic that the Supreme Court, the final arbiter of law, assumes a babyish naivete to promise us that we are crazy to worry about the floodgate of corruption that he is opening, because he is not opening it.

If you feel like Alice at this Tea Party, you are not alone. Nearly two-thirds of the American people essentially just boycotted an election, a first in contemporary history. Many factors led to this dismal election outcome, but surely, the sense that voting no longer matters after Citizens United and McCutcheon, as evidenced by the Keystone vote, had to have affected millions of Americans.

The solution for each citizen, personally, is a surprisingly old one, but quintessentially American. Abolitionist Henry David Thoreau, protesting against slavery and its imperial expansion in the Mexican-American war, wrote in his 1849 essay “Civil Disobedience,”

The solution to the snowballing oligarchy is a citizenry increasingly engaged in its potential democratic might. This is true not only in the voting booth, but every day, all day. Insist on democratic values of inclusive decision-making, fairness, peaceful problem-solving, at every opportunity. Pursue justice in your community, in your work, in your relationships. Inform and educate the people around you. Each pulse of democracy that reverberates from one individual to another could add up to a cacophony capable of drowning out the corruption seizing our government if every American insisted on democracy every day.