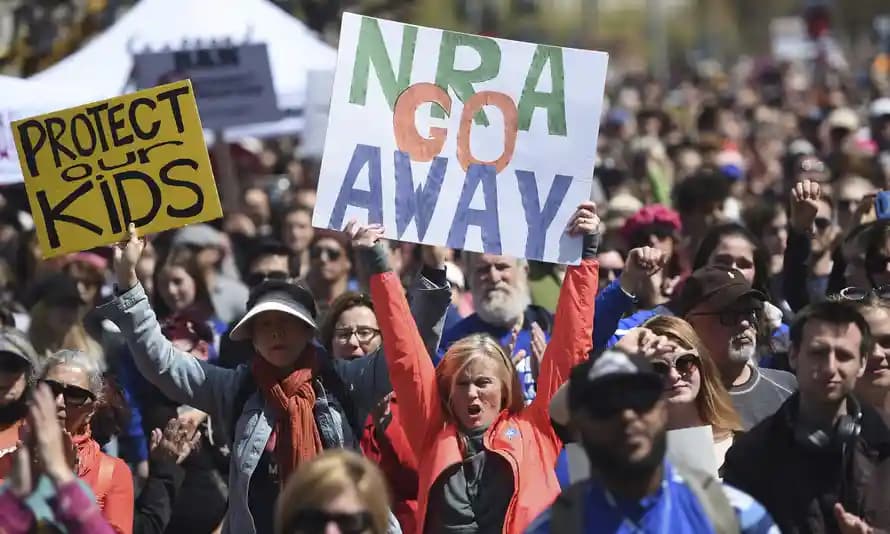 Things are becoming dire in the United States. To hear the National Rifle Association tell it, individual liberties are under attack. But to completely rational individuals, anger is growing over the NRA’s influence over our politicians. Our government is being bought by those more worried about profit than human life, and it’s no longer solely the organization at fault. Its members now hold the blame.

The National Rifle Association doesn’t fight for the best interests of the American citizen. Hell, they don’t even fight for what their own members believe. A 2013 poll found that 90 percent of Americans support universal background checks, and, as it turns out, 74 percent of NRA members support them as well.

That simple fact didn’t matter, though. In front of the families of Sandy Hook Elementary School victims, Republican Senators filibustered to prevent the issue of universal background checks from even coming up for a vote. The vote to end the filibuster was 54-46, below the 60 votes needed.

Even though most members of the National Rifle Association support universal background checks, they’re not absolved of guilt in this matter simply because of their beliefs. 18th century Irish statesman Edmund Burke once said:

“The only thing necessary for the triumph of evil is for good men to do nothing.”

Unfortunately, NRA members are doing worse than nothing; they’re actively funding the group. Even though they’re at odds with the NRA and the bought-and-paid-for politicians it’s funding, they still give money to the group every single year. On the  organization’s website, it’s shown that a one-year membership costs $35.

Of course, you can save a few dollars by snagging a five-year membership for $125. Better yet, drop a full $1,000 and you’ll be granted lifetime membership with the group. This means that all NRA members, including the 74 percent at odds with the group over their hostile interference in our political process, actively hand over cash to Wayne LaPierre.

Even scarier than that is the idea that National Rifle Association membership jumped to 5 million in 2013. The most sickening part, though? The fact that this threshold was reached after 500,000 new members joined in the six months following the Sandy Hook massacre. Maybe they were hoping to help stop these types of brutal attacks, but Noam Chomsky‘s words should stand out to them:

That’s a message that every member of the National Rifle Association needs to take to heart. The NRA paid out nearly $1 million in campaign contributions, at least $7 million in lobbying, and over $28 million in outside spending — all between 2013 and 2014. By doing this, they ensured that terrorists and mass murderers would have easy access to guns.

Just think: The terrorist who killed nine churchgoers in an African-American house of worship secured a gun without actually passing a background check. The terrorists who murdered 14 people in San Bernardino recently were able to buy assault weapons because there was no federal law to prevent them from doing so.

Both of these are serious issues that need correcting, yet the NRA constantly lobbies against fixing them. Hell, the Republicans in the back pocket of the National Rifle Association even blocked a bill that would’ve stopped people on the terrorist watch list from purchasing guns. That’s right: even suspected terrorists have a right to bear arms in the  insane worldview of the NRA.

So by purposefully standing in the way of commonsense gun legislation, NRA leadership is ensuring that terrorists and mass murderers have easy access to human killing machines. And for the members who disagree with the organization? The ones who still pay their membership dues? A little quote from former President George W. Bush comes into play:

“We will make no distinction between the terrorists who committed these acts and those who harbor them.”

NRA members: You’re harboring an organization that’s actively working against your personal wishes. You’re giving money to a group whose sole purpose is to prevent any type of meaningful gun legislation from passing. After the San Bernardino attack, John Oceguera, a lifetime member of the NRA, renounced his membership due to the group’s extremist agenda.

If you’re not doing so at this point, you have just as much blood on your hands as the terrorist organization you support.