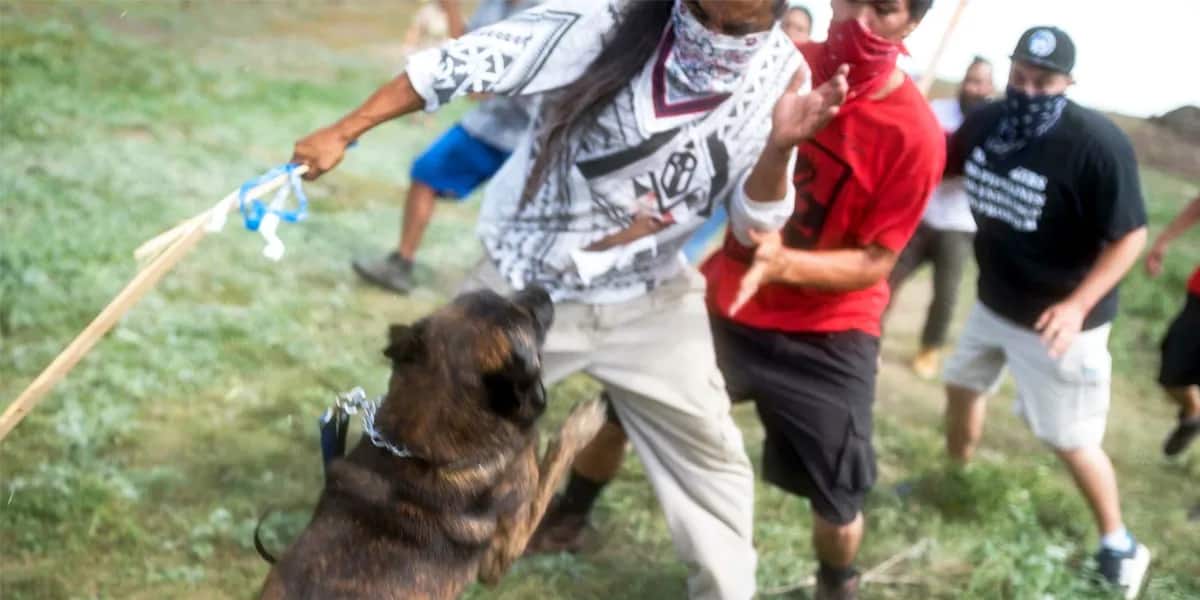 A Native American protest against the construction of an oil pipeline that they say threatens their land took a violent turn, Saturday, when the Dakota Access company attacked protesters with dogs and pepper spray, as evidenced by dramatic and disturbing video captured by Democracy Now‘s Amy Goodman.

In July, the Standing Rock Sioux Tribe sued the U.S. Army Corps of Engineers for issuing a construction permit to Dakota Access LLC under “an illegally narrow view of its responsibilities to protect and engage the Tribe when it granted the permits,” the Tribe alleges. The tribe has “two broad issues” against the pipeline:

“First, the pipeline would pass under the Missouri River (at Lake Oahe) just a half a mile upstream of the tribe’s reservation boundary, where a spill would be culturally and economically catastrophic. Second, the pipeline would pass through areas of great cultural significance, such as sacred sites and burial grounds that federal law seeks to protect.”

Despite the lawsuit, the company began construction. The Standing Rock Sioux Tribe, along with Native and other allies, launched an ongoing protest.

On Saturday, as bulldozers began ripping up ground that Standing Rock Sioux claims as a cultural site, protesters converged on the site. Some protesters ripped through a thin wire fence. They were met by private security agents wielding cans of pepper spray, and leashed dogs. A company helicopter flew overhead. In Democracy Now‘s video, it appears the agents urge the dogs to attack the protesters. In the video, protesters can be seen washing pepper spray out of their eyes. A protester with a bloody arm is seen. And a dog with a bloody snout is seen.

This never should have happened in the first place. The Tribe’s lawsuit should automatically result in an injunction against construction until further review can give the Tribe a hearing and address their claims. Otherwise the United States government is simply adding another bullet-point in its centuries-long history of tearing up treaties with Native Americans as soon as their ever-narrowing land becomes profitable for white business. And a private company is allegedly destroying Native land and violently violating the freedom of speech of Native protesters who have no recourse. In 2016, that is simply unacceptable.