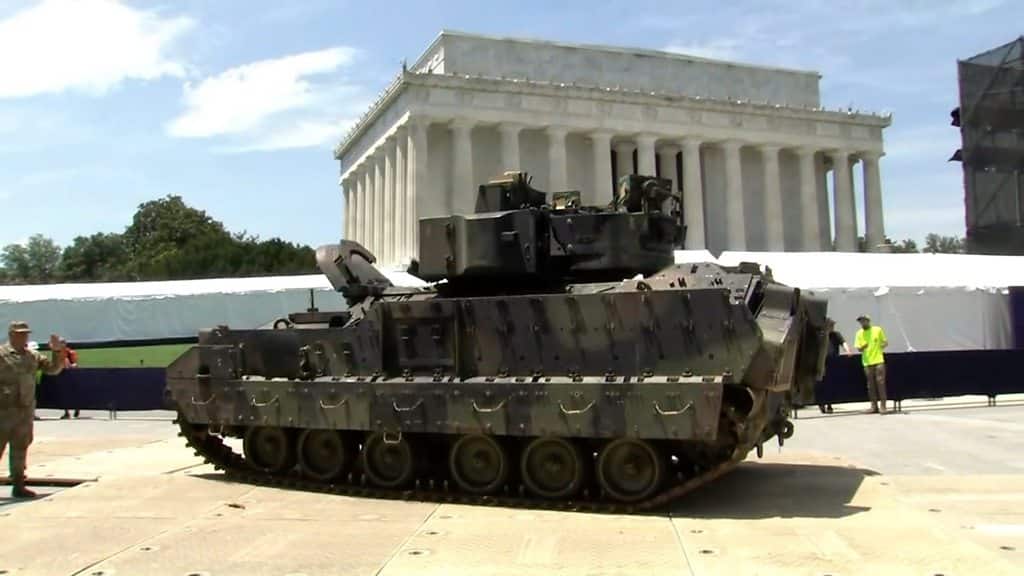 Supreme Comandante-elect Donald Trump decreed that America WILL be great again, even tremendouser than the most patriotic son of Washington could have imagined. The American heart bursts in the breast of the Fatherland. Because Donald Trump has planned–O! Be still quavering soul of America!–military parades in cities! Thus records the Washington Post in its fearless interview which just repeats whatever Trump said, like the Caudillo on the Potomac can’t do that himself on Twitter. Yes, he really, really said this:

“That military may come marching down Pennsylvania Avenue. That military may be flying over New York City and Washington, D.C., for parades. I mean, we’re going to be showing our military,” he added.

Nations that hold ostentatious military displays on a regular basis are uuuuusually some sort of dictatorship. Think North Korea, with Dear Leader lazily saluting from a balcony as battalions of emaciated teenagers crisply goosestep in unison and trailers lug cardboard ICBMs down Red Square. It’s a ludicrous display of power because North Korea doesn’t have a whole lot else to offer its citizens. It creates the image that North Korea has a military that can threaten its international rivals, which is key to the propaganda which justifies its rule. And it also serves to give the population a sense of national pride in something, since their lives are generally fairly dismal and it’s an open secret that the systemic incompetence of the kleptocracy is largely to blame.

America has always had Memorial Day and Veterans’ Day parades. Those are usually pretty small, local affairs. And they’re not really about celebrating the military, per se. They praise the honor and sacrifice of family, friends and neighbors who served our country.

America doesn’t need military parades, because America already has the most powerful military on earth, and there’s still no close rival, even with the buildups in Russia and China in recent years. Look, everyone, we have a state of the art military! Yeah, duh. That’s why my paycheck is always smaller than I thought it was going to be.

The astounding thing about this interview is, the way Washington Post wrote up the interview, it’s not clear that Trump offered any other response to the question, “How can greatness be measured and sensed? What does it even mean?” We’ll shut down New York and Washington D.C. so that tanks can roll down the street. That’s how we’ll be great again.

If Trump really can’t understand that the American people see far more greatness in the dignity of affordable healthcare, a steady 9-5 job and the right to vote unmolested than in all the F-16 flyovers in the world, he’s going to be the last one to know when his presidency collapses around him.