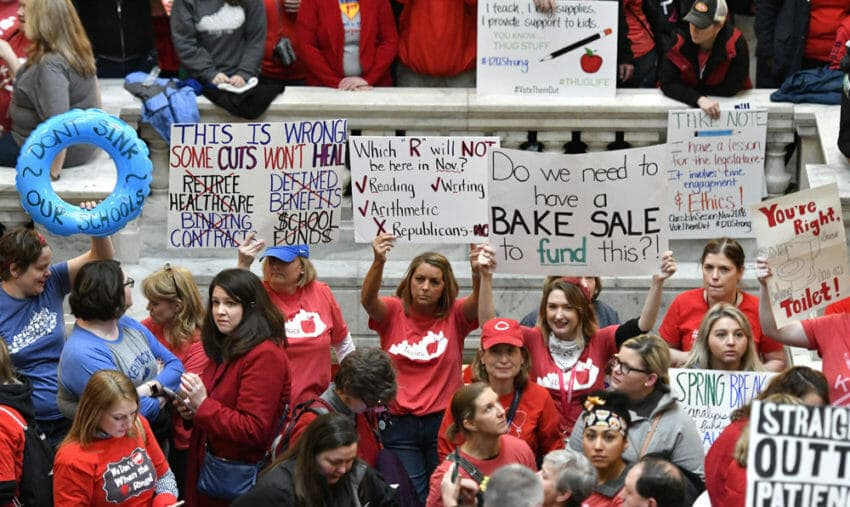 The Republican War On Education continued in earnest on Monday as an Oklahoma legislative committee led by Tea Party Republican, Dan Fisher voted overwhelmingly in favor of a bill that would effectively ban Advance Placement History classes in the state. The bill, HB 1380, bars state funds from being spent on courses of AP History and goes on to specify what should be taught in their stead.

Fisher, a member of The Black Robe Regiment, a right wing religious/political group with ties to Glenn Beck, said the courses,

The move follows a resolution passed by the Republican National Committee last summer that declared the framework of the course,

“reflects a radically revisionist view of American history that emphasizes negative aspects of our nation’s history while omitting or minimizing positive aspects.” And claims it “deliberately distorts and/or edits out important historical events.”

Today, Texas jumped on the bandwagon with a similar measure moving through their Republican dominated state School board. Instead of pulling the funding, the Texas measure simply declares that Texas’ official curriculum transcends all others.

Among the criticisms of the AP History course is a list of topics no longer covered, leaving out important items as Thomas Paine’s Common Sense and other Founding Fathers. As it turns out, the list is not accurate. The new framework includes those previously taught and adds many others.

Among the purposes to AP course are to prepare students for the level of study that will be required when they get to college and, in most cases, gain college credits in the process. They offer students an opportunity to show colleges what they are capable of. All the while, AP courses challenge gifted students, raising interest for those who would be bored working within the regular curriculum.

Most importantly, though, AP courses teach students how to think on a higher level, to question the how and the why and not just the who and the when. While other students are studying the minutiae of history, AP students study the causes and consequences of actions, especially the unforeseen or unwanted ones.

AP students are the leaders of tomorrow. How can they be expected to avoid the next Viet Nam or Iraq unless they study how we got into the last one? AP courses teach critical thinking. Students learn not only how to do their own research, but to ask their own questions, probably the greatest skill a leader can have.

It’s important to note that AP History, like all AP Courses, did not come out of Common Core. In fact they are not a product of government at all. They’ve been developed by the College Board, the same organization that administers the SAT.

The new framework, they say was revised with input from thousands of teachers across the country.

“The teachers and professors participating in the AP U.S. History program expressed strong concerns that the course required a breathless race through American history, preventing teachers and students from examining topics of local interest in depth, and sacrificing opportunities for students to engage in In depth study, critical thinking, local interest. Eliminating AP courses is one more battle in the Republican War on Education. writing and research,”

In depth study, critical thinking, local interest. Eliminating AP courses is one more battle in the Republican War on Education. If the purpose of public education is merely to produce compliant workers for American businesses as some have suggested, the go ahead. Do away with AP courses. But if we want America’s next generation of leaders to represent all walks of life, and not just the elite, then courses like these are essential.