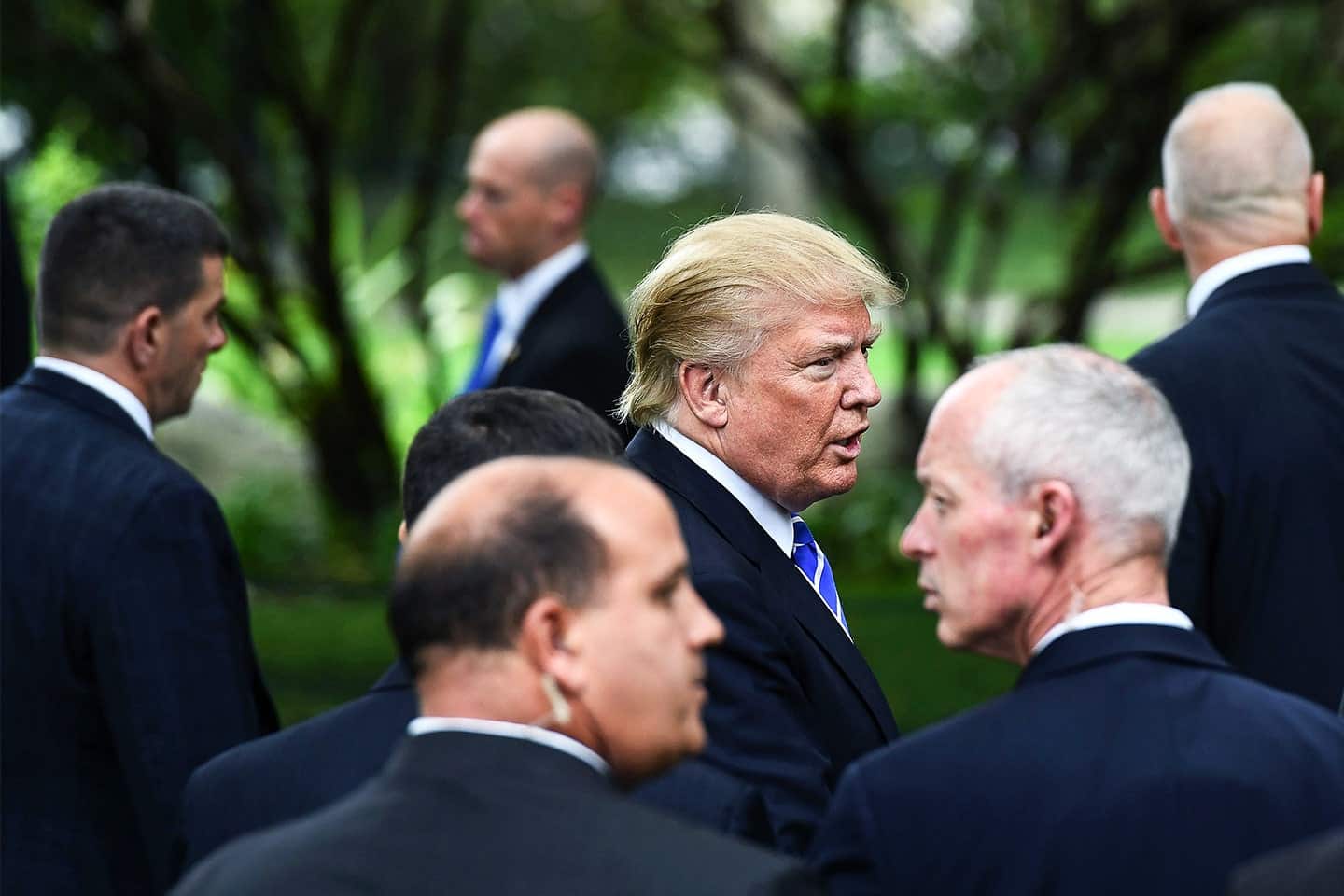 At his rallies, President-elect Donald Trump used a private security and intelligence team alongside the Secret Service to protect him and persecute protesters. And he intends to keep at least a few members of this team after he becomes president, say folks who are familiar with the plans.

Obviously this is a huge break from tradition—virtually all modern presidents and presidents-elect have relied solely on the Secret Service, Politico reports. And at rallies or other events, local law enforcement agencies were added to the mix, according to presidential security experts and Secret Service sources.

Now Trump has opted to maintain an aggressive security force led by Keith Schiller, a retired New York City cop. The Navy veteran began working for Trump in 1999 as a part-time bodyguard. Over time, Schiller rose to head of security.

This is risky business, say security officials, who caution that employing private security personnel may create additional dangers for Trump and his team. They add this may also be risky for protesters, many of whom already allege racial profiling, undue force and aggression at the hands of Trump’s security. At least 10 protesters have joined a trio of lawsuits pending against the billionaire real estate magnate.

In the video below, Schiller can be seen punching a protester:

“You never want to commingle a police function with a private security function,” he said. “If you talk to the guys on the detail and the guys who are running the rallies, that’s been a little bit difficult because it’s so abnormal.”

Wackrow left the Secret Service in 2014 and is now the executive director of Risk Assistance Network and Exchange (RANE), a security company. If he were the lead agent at a Trump rally, “I wouldn’t allow it,” he said. But it’s not an easy situation for the Secret Service, he said.

“What are they going to do, pick a fight with the president-elect and his advisers? That’s not a way to start a romance.”

And as Trump campaigned, his security force earned a hostile reputation. Schiller was captured on video hitting a Latino protester in the head outside Trump Tower, Salon reports. He also removed Univision’s Jorge Ramos from a news conference in Dubuque, Iowa last year.

And the nature of his rallies will change after he becomes President. Citing Politico, Salon notes that taxpayer-funded rallies will only be able to be staffed by public law-enforcement agencies. Trump’s security force won’t be able to remove protesters unless they are breaking laws.

Politico and Salon tried to find out who’s paying for this private security force but weren’t successful. Politico asked his transition team who was footing the bill, how they and the Secret Service will work together, and what their roles will be. But the team ignored the questions. And Salon sent an email which also went unanswered.

And allies of the Secret Service, alongside independent security experts say that Schiller’s close relationship and protectiveness of his boss has already complicated the agency’s strict protection protocols.

Perhaps what’s most alarming about this is the consensus the security experts came up with: Even if Trump’s own private security never turns out to be particularly repressive, they aren’t doing a very good job.

When a 32-year-old man jumped a barricade and rushed the stage where Trump was speaking at a rally in Dayton, Ohio, Secret Service agents descended on the future president immediately, encircling him in a human shield. Other agents tackled the man before he could leap onstage. A mere second after two agents reached Trump, Schiller leapt on to the stage, wedging himself between the melee and Trump.

Sure the whole thing looked choreographed, with the phalanx of dark-suited men swarming in to protect Trump, but those in law enforcement circles weren’t impressed. Schiller’s reaction was considered too slow and was viewed negatively by a number of agents, said one law enforcement source who’d been briefed on the conversations. One agent described Schiller as the “JV trying to keep up in a varsity game,” the source said, according to Politico.

Because Schiller situated himself where he did, the agents would have bumped right into him if it had been necessary to evacuate Trump.

“If that happened, they would have run right into Keith. He was about three seconds too late,” the source said.

At his rallies, Trump’s supporters have often unleashed violence on protesters — by grabbing them and shoving them by the face, and in some cases, punching people. And the fact that his security team is also prone to intimidation means this is a rough and potentially dangerous time to be a protester.

Donald Trump Completely Baffled By Statement He Made Yesterday: ‘Who Said That?’ (VIDEO)

Donald Trump Completely Baffled By Statement He Made Yesterday: ‘Who Said That?’ (VIDEO)