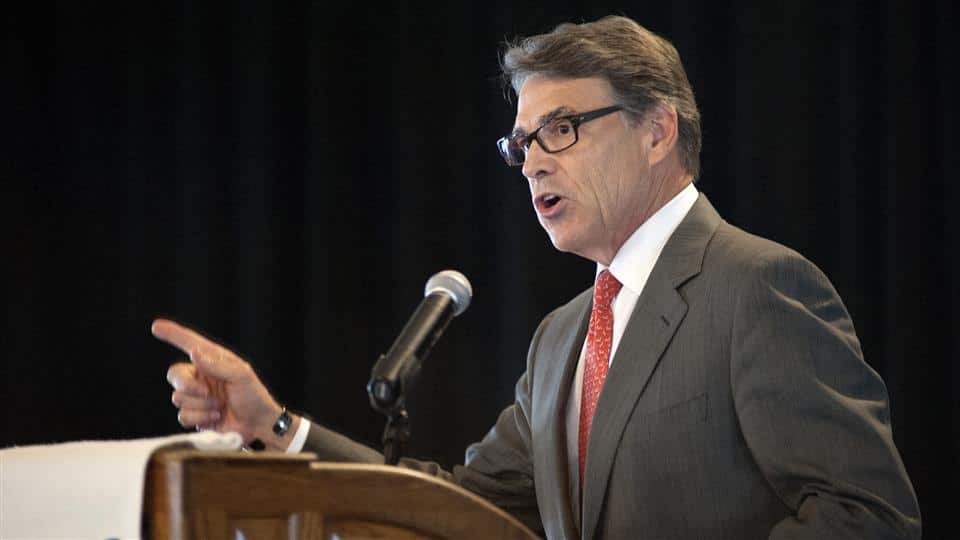 One Down, Twenty To Go…

It’s official: Rick Perry has suspended his presidential campaign and is no longer seeking the Republican nomination for the presidency. He’s now the first candidate to officially drop out of the 2016 presidential race.

The former Texas Governor and three-time George W. Bush Impersonation World Champion (okay, I made that last bit up) is suspending his campaign because said campaign is completely out of money, his indictment is still going on, and… uh… aww shucks! What was that third thing again? Help me out here, Ricky…

“When I gave my life to Christ, I said, ‘Your ways are greater than my ways. Your will is superior to mine.’ Today I submit to you his will remains a mystery, but some things have come, and become, very clear to me. That is why today I am suspending my campaign for the presidency of the United States.”

Oh, right! Jesus doesn’t want you to be president. How could I forget? I suppose the Lord giveth, and the Lord thinketh you’re an idiot. Anyway, Perry continues:

“We have a tremendous field of candidates. Probably the greatest group of men and women. I step aside knowing our party [is] in good hands as long as we listen to the grassroots. Listen to that cause of conservatism. If we do that, then our party will be in good hands.”

Well, at least we have that going for us, right? A field of nineteen men and one woman, most of whom think God speaks directly to them, appeasing a “grassroots” movement made up of fanatical religious extremists and nutcases who thought President Obama was “invading” Texas, funded almost entirely by special interests, and serving as the armed wing of Koch Industries. Yep. Definitely in good hands.

Perry’s leaving the race will have no real impact on the primaries, where Donald Trump is beating the rest of the field handedly with polling equal to the second and third place candidates combined. If anything, the move will slightly bolster one or more of Perry’s former rival campaigns, with his supporting super PACS presumably circling back to support a different candidate.

The real effect Perry’s departure will have on this election season? We aren’t going to be treated with one of his legendary gaffes. But have no fear, folks: with Donald Trump, Ted Cruz, Marco Rubio, Chris Christie, Mike Huckabee, and so many others still in the race, there will surely still be many laughs to be had. So happy trails, Rick Perry, and try not to join any secession movements on your way out.