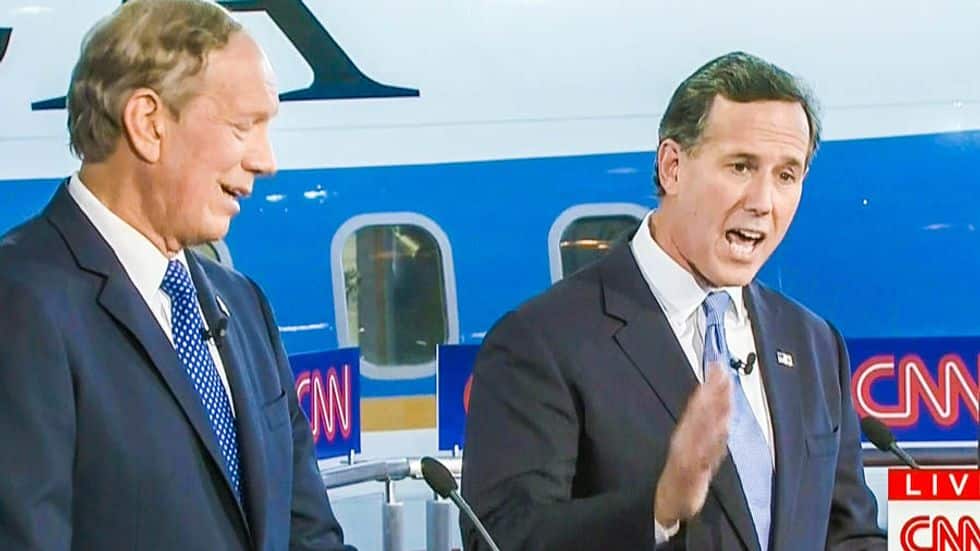 Many things came out of the recent fiasco where a Kentucky clerk refused to issue marriage licenses to gay couples. One of the more positive outcomes were some amazing Kim Davis memes. Unfortunately, Davis has also been illogically compared to both Martin Luther King Jr and Rosa Parks. Taking it even a step further, however, one Republican candidate has compared her to a Columbine victim.

As you can see in the video below, Rick Santorum, when asked about Kim Davis, compared the Kentucky clerk to a young woman who died during the Columbine massacre. Here is his exact quote:

“Sixteen years ago this country was tremendously inspired by a young woman who faced a gunman in Columbine and was challenged about her faith and she refused to deny God. We saw her as a hero.”

Here’s the video with the full exchange:

Of course, there are a few things wrong with this comparison. First off, Cassie Bernall was a high school student who was massacred simply for being at school that day. Kim Davis, on the other hand, is an elected official who refused to abide by a court order and the Constitution.

Of course, this isn’t where the delusional ignorance ended. Santorum would go on to say:

“Today, someone who [chooses] to defy a judge’s unconstitutional verdict is ridiculed and criticized, chastised because she’s standing up and not denying her God and her faith. That is a huge difference in 16 years.”

Enter the insane amount of cognitive dissonance required to call yourself a Republican in the modern world. Even though the First Amendment says that Kim Davis, a government official, cannot use her religious beliefs to deny the rights of others… even though the Equal Protection Clause of the Constitution says that gay couples deserve the same rights as any other couple… Santorum still calls the order unconstitutional.

Of course, that’s neither here nor there. Another glaring problem with Santorum’s comparison rests in the Columbine situation itself. Which part, you might ask? The entire scenario Santorum described. Even though the story of Cassie Bernall refusing to deny God in exchange for her life took on a viral nature, it in all likelihood never even happened.

Emily Wyant was another student present on the day of the Columbine massacre. In fact, she was hiding under the same table as Cassie Bernall. She stated that Cassie was never asked anything, and she never said anything, before shooter Eric Harris ended her life. Santorum’s version of events, albeit an inspiring version for religious individuals, likely never even happened.

Go figure: A Republican using misinformation and fallacies to defend his point. Who would’ve imagined?

GM Gets Away With Murder, Literally, With $900m Settlement