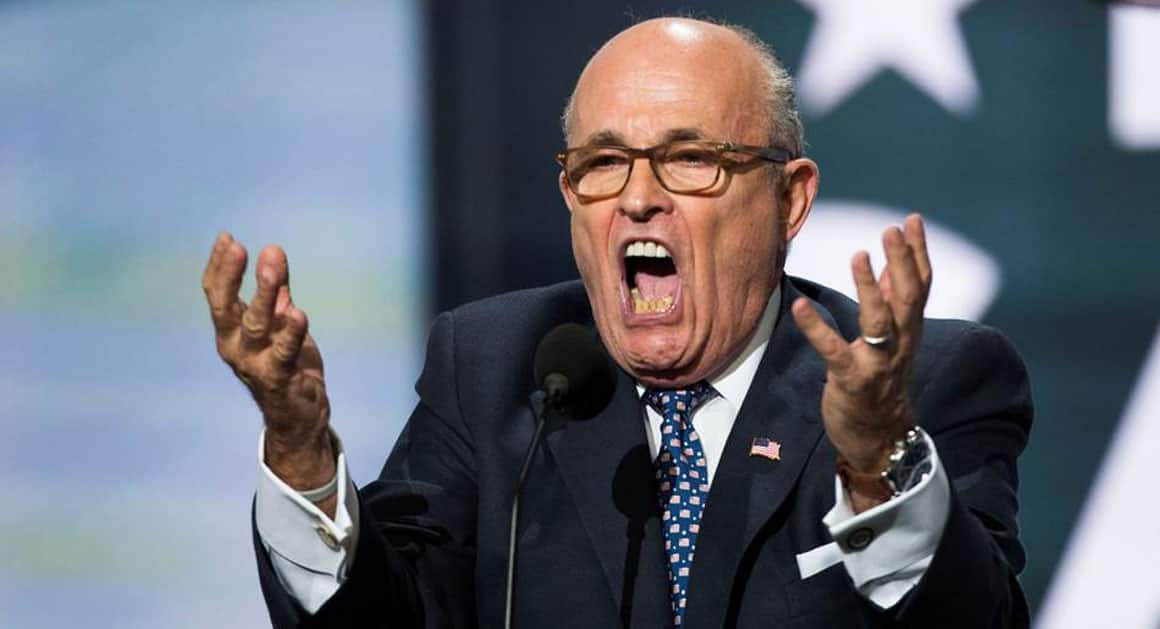 As Donald Trump’s campaign continues to implode, his surrogates are stepping up the effort to make him look less like a narcissistic imbecile. They have their work cut out for them. Even though he has embraced the TelePrompter that he once said should disqualify any candidate, he is still embarrassing himself in a very public manner. Consequently, the clean up crew has to get ever more creative.

This morning on Fox News Sunday, Rudy Giuliani made the curious assertion that Hillary Clinton wasn’t campaigning (video below). So host Shannon Bream asked him a darn good question: “Then why is she doing so well in the polls?” He delivered a nearly incoherent response mainly blaming the so-called “liberal” media that “constantly demonizes Donald Trump.” Never mind the recent Harvard study that proved “Clinton had by far the most negative coverage of any candidate.” But Giuliani went off the rails when he ventured into conspiracy theories about Clinton’s health:

“[The media] Fails to point out several signs of illness by her. All you got to do is go online … Go online and put down ‘Hillary Clinton illness’ and take a look at the videos for yourself.”

The Fox News School Of Medicine

Is he friggin’ serious? Giuliani’s authoritative approach to clinical diagnoses is to consult – Google? First of all, none of the “doctors” practicing on the Internet have examined, or even met, Clinton. Secondly, the medical opinions you’re likely to encounter online come from a dubious collection of “experts.” For instance, Alex Jones of Infowars, the Drudge Report, Glenn Beck, and of course, Fox News. What brain disease would cause Giuliani to think that Googling “Clinton’s illness” would validate his ludicrous claims?

As for Fox News, last week Sean Hannity slandered Clinton with a week-long extravaganza of factless blather and made up health crises. Steve Doocy of Fox & Friends called her prescription glasses “a sign of brain damage.” Trump spokesperson Katrina Pierson baselessly alleged that Clinton has dysphasia. Not to be left out, Trump has lately been saying that Clinton “lacks the mental and physical stamina to take on ISIS.” It’s clear that Trump’s”brain” trust has opted to surrender the policy debate and attack Clinton’s health instead.

For the record, Clinton’s actual doctor released a statement saying that “Secretary Clinton is in excellent health and fit to serve as president of the United States.” Now that’s pretty good, but it doesn’t compare with the note from Trump got from his doctor. It declared that he will be “the healthiest individual ever elected to the presidency.” How he knows that without having examined every other president was not explained. However, it sounds very much like something Trump himself would say. Could he be pretending to be his own doctor like he pretended to be his own publicist?

Giuliani’s confidence in the Internet’s infallibility is reminiscent of Trump’s similar reverence for online truthiness. A couple of months ago Trump was interviewed by Chuck Todd on Meet the Press. Todd pushed him to acknowledge that a video he posted on Twitter was a hoax. Trump squirmed uncomfortably while seeking a plausible denial, finally settling for this lame disavowal: “All I know is what’s on the Internet.”

From a Commander-in-Chief perspective, that an awfully low standard for knowledge. But it seems to be a recurring pattern with Trump and his cohorts. In the absence of facts to support their increasingly deranged allegations, they settle for fantastical fables they find online. It’s a de facto admission that they simply don’t care about truth anymore. Not that they ever did.

Louisiana Gov To Donald Trump: F*ck You, We Will Not Let You Exploit Our Tragedy