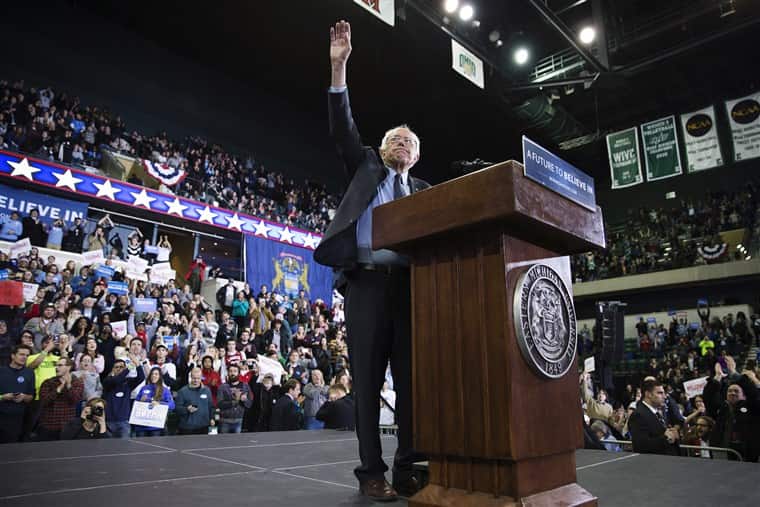 “Bernie Sanders can’t win the general election” has been a rallying cry of his critics since Sanders entered the presidential primary race last April. In an election where a Republican victory could mean the end of federal funding for Planned Parenthood, a repeal of the Affordable Care Act, the appointment of several conservative Supreme Court Justices, and a good old-fashioned grab bag of random political lunacy, suggesting that Sanders simply can’t beat any Republican in the general election is a powerful—if perhaps cynical—argument. The prospect is so troubling that it’s even got some Sanders supporters anxious about voting for him, which could compel them to vote for Clinton in the primary instead.

There’s one major problem with this line of thinking: The numbers don’t support it.

A New York Times roundup of recent results from the battleground states of Iowa and New Hampshire shows Bernie Sanders outperforming Hillary Clinton among registered voters in hypothetical general-election polling matchups. According to The Times, Sanders would defeat Donald Trump, Ted Cruz, and Marco Rubio, the three leading Republican candidates, in New Hampshire. In Iowa he leads Trump and Cruz and is tied with Rubio.

The results are due in part to Sanders being “buoyed by the support of independent voters.” Attracting independent voters and bringing new people, such as young voters, to the polls is crucial to winning a general election. While Clinton currently leads Sanders among Democratic voters in the primary race, Sanders excels among young voters and Democrat-leaning independents, in some polls by over 20 percent in each of those demographics, potentially giving him an edge in swing states and the broader general election.

Bernie Sanders’ Strong Results In Polling Matchups Are Nothing New.

Sanders has repeatedly outperformed Clinton in hypothetical head-to-head polling matchups in the Hawkeye and Granite States, as well as other battleground states. The Hill reported on Sanders pulling ahead of Clinton in polls of general election polling matchups in some swing states as far back as July, noting that Clinton was becoming vulnerable to many of her Republican rivals. Likewise, The Huffington Post reported in August on polls showing Sanders doing better than Clinton against Republicans in the general election in Iowa and Colorado. NBC reported similar results in October.

This is not to say that Sanders is always the likely favorite in head-to-head polling matchups in swing states. In Virginia, for instance, both Sanders and Clinton poll better than Trump, but Clinton leads by a wider margin, according to Real Clear Politics’ polling aggregate. Clinton also polls better against Rubio in some matchups. Both Dems trail Rubio in Ohio, for instance, but Clinton trails by an average of only two percentage points while Sanders trails by three. Those numbers would still be considered a statistical tie, in either case.

What’s most significant is that Sanders isn’t just outperforming Clinton in state polling matchups. He now outperforms her in aggregate polling data of hypothetical head-to-head matchups in the general election.

HuffPost Pollster’s aggregate shows similar results, with Sanders winning over Trump by an even larger margin of 49.3 percent to 42.4 percent, whereas Clinton leads Trump by only 1.7 percentage points at 47.1 percent to 45.4 percent. Sanders’ 6.9 point lead would put him beyond the margin of error for many polls. Clinton’s 1.7 point lead, on the other hand, would place her within the margin of error and make her statistically tied with Trump. According to HuffPost Pollster, Sanders also leads Cruz by an aggregate total of 46.4 percent to 43.1 percent, giving him a small advantage over Clinton against Cruz, and Rubio by 0.2 percentage points at 45 percent to 44.8 percent. Clinton does slightly better than Sanders against Rubio, beating Rubio 46.8 percent to 45.7 percent.

Sanders Deserves More Coverage As A Viable Candidate In The General Election.

Despite the fact that these numbers fly in the face of the pervasive sense of inevitability that surrounds the Clinton campaign and call into question the taken-as-gospel assumption that she would be the strongest candidate in the general election, there has been very little coverage in the corporate media. Most headlines on the subject simply highlight that the primary races in Iowa and New Hampshire are tight and bury the fact that the same polls show Sanders doing better than Clinton in the general, if they mention it at all.

Granted, election polls are sensitive and fickle, and there is still a long ways to go before the primaries, let alone the general. But with so much data suggesting that Sanders is every bit as competitive as Clinton in the general, it’s time that we lay the question of his electability to rest. As Jamelle Bouie, Slate’s chief political correspondent, put it, “In other words, if Sanders had an electability gap with Hillary, he’s closed it.”