Santorum On Transgender Issues: Has He Seen The Light? 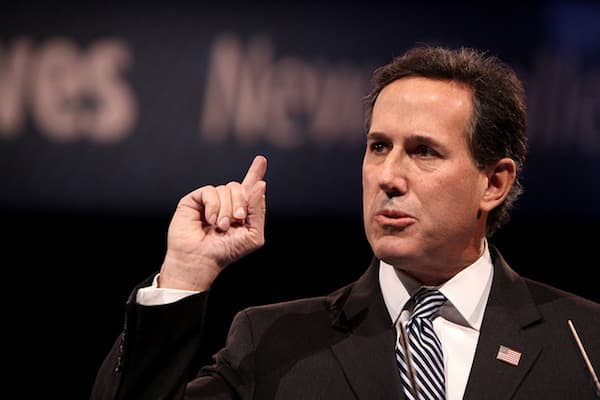 Washington, (CNN): Former Pennsylvania Sen. Rick Santorum is clarifying — but not stepping back from — surprising comments this weekend in support of former Olympian Bruce Jenner’s decision to come out as a transgender woman.

“If he says he’s a woman, then he’s a woman,” Santorum told BuzzFeed during a roundtable discussion in South Carolina on Saturday.

Santorum continued: “My responsibility as a human being is to love and accept everybody. Not to criticize people for who they are.”

The potential Republican presidential contender said while he believes it’s fine to criticize people “for their behavior…as far as for who they are, you have to respect everybody.”

Say WHAT?!? This is from the mouth of Rick Santorum?!? Has he been reborn on transgender issues? Found God about gays? Dropped the LBGT demagoguery? Has Rick Santorum seen the light?!?

Don’t be so sure.

Let’s parse this construction a bit, shall we?

“If he says he’s a woman…” Not exactly a vote of confidence, there, is it? It’s a step away from “If you say so…” A subtle affirmation that still leaves a whole bunch of doubt and also raises questions about Bruce Jenner’s integrity. Nice.

The real tell for me is, “…it’s fine to criticize people ‘for their behavior…’” Let us never forget that Rick Santorum is the man who said this:

Documentary film maker Kristina Lapinski attended Thursday night’s Granite State Patriots Liberty PAC candidates forum in New Hampshire and asked Rick Santorum how he would react if she — a lesbian — were his daughter. The former Pennsylvania senator said he would love her, before claiming, “like anything in life, it is your choice“:

“What would you do if I was your daughter?”
Santorum smiled, “I would love you!”
“Would you want me to get married and have a family?” asked Lapinski.
“Only if it were with a man.”
“But I am not attracted to men,” Lapinski retorted.
“But it is your choice,” Santorum insisted.
“Rick, it is not my choice!” Lapinski argued.
He continued with great authority: “Like anything in life, it is a choice. You may feel this is the way that it is supposed to be; you make decisions in life, and you choose what is right.”

Unless Santorum has changed his belief that homosexual behavior is a choice – and there is no indication of that – then I’m not buying any newfound benevolence toward the LGBT community. Santorum’s Jesus has not been very compassionate toward gays, so why should He be compassionate toward a transgender? Intent tells. And as we’ve seen over and over, Rick Santorum’s intention is to keep the gays away.