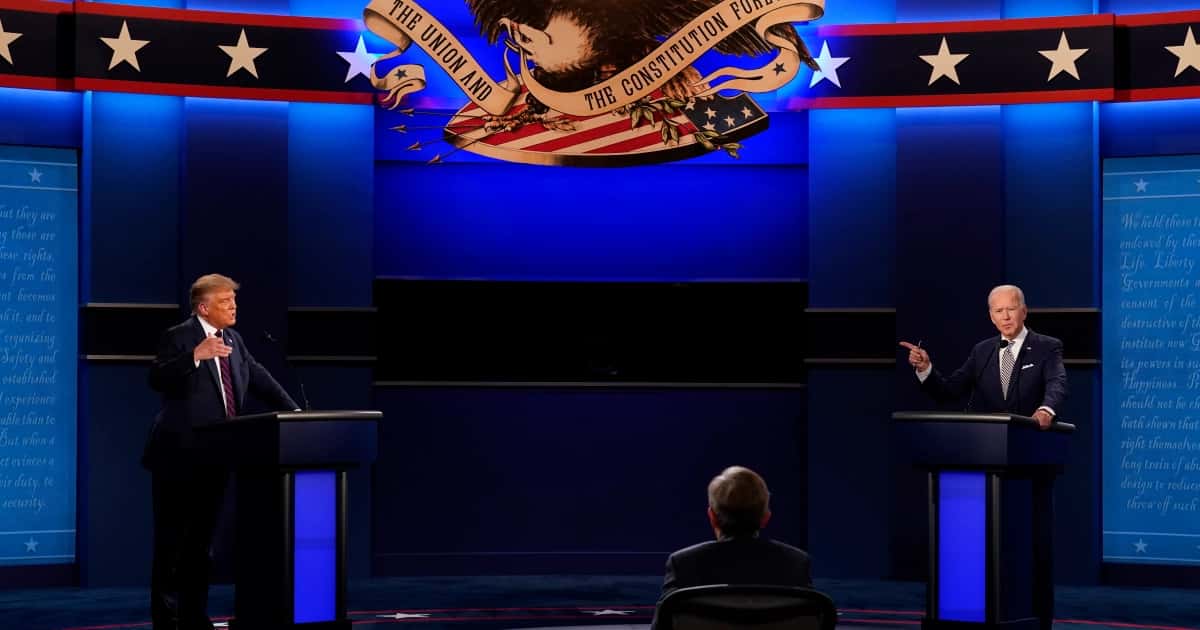 The third and final presidential debate between Hillary Clinton and Donald Trump will air tonight at 9 pm EST, but let’s be honest: most of you already know what’s going to happen. Trump will embarrass himself, Clinton will try desperately not to gloat, both candidates will throw as much shade as humanly possible… they’re fairly predictable, aren’t they?

With most Americans at this point being utterly fed up with the 2016 presidential race, there’s really only one factor enticing casual, non-political-wonk viewers into watching the final debate: it’s the last big chance to see Donald Trump make a complete and total ass out of himself on live television. And if there’s ever been a presidential candidate in American history with the capacity to embarrass himself on an epic, biblical scale, it’s definitely Donald Trump.

Trump has already called for his campaign rival to be imprisoned, warned of mass election fraud, and at one point during a primary debate earlier this year, he even went so far as to talk about his own penis. So for Trump to really entertain television audiences tonight, he’ll need to go big (it took a lot to resist the urge to throw in a pun right there). He’ll need to do something so monumental, so atrocious, so mind-bogglingly hilarious, that viewers will literally fall out of their seats and roll around on the floor laugh-crying in their own snot and tears. That’s where the bar is, Donny. Try not to disappoint, okay?

So what can Trump do to really make tonight’s debate the most memorable 90 minutes of comedy ever recorded in the annuls of television history? I have a few ideas. And Mr. Trump, if you’re reading this: you only really need to do any three of these things, okay? Four is overkill, and five would just be you showing off.

Ten Hilarious Things Donald Trump Should Do During Tonight’s Debate

1. Expose yourself. We all know Trump is probably history’s greatest Googlebator, searching his own name at least three or four times each day. He’s surely seen all of the Internet memes riffing off of Marco Rubio’s joke about his small hands. Tonight is Donald Trump’s last chance to set the record straight, proving to America once and for all that he’s packing more downstairs than a Halloween candy corn that defected in the factory and turned out entirely orange.  The real question however is if enough people have the big-screen 4K resolution televisions necessary to even spot it if he actually does whip it out on live TV.

2. Attempt to summon the Great Old One, Cthulhu, the master of darkness, to rid the world of Hillary Clinton once and for all. I mean, you’ve tried literally everything else to get rid of her, haven’t you? Demanding she be arrested, calling on “second-amendment people” to assassinate her… what’s left to try? Be careful though, Donald. Cthulhu will probably excite voters quite a bit more than you or Hillary ever could. I mean, why should voters choose the lesser of two evils?

3. Walk out into the studio audience and start groping people. You know you want to, and most of the people in the audience are probably sporting chastity belts and armed with pepper-spray just in case you do. Or at least, I hope they are. If this news cycle has taught me anything, it’s that we should all be prepared for unwanted sexual advances whenever we foresee ourselves being within 2,500 yards of The Donald.

4. Go with your heart, Donald. Propose to your daughter on live television. At this point, we all know about your lustful desires for your own daughter, Ivanka Trump. A live debate watched by millions of people is the best time to make a romantic proposal that really sticks. Sure, you’re both married. Sure, it’s super fucking gross that you talk about your daughter the way you do. But hey, the heart wants what the heart wants. And marrying your own daughter? Most of your supporters would be down for that.

5. Admit that your whole candidacy was just a really bad joke gone awry. Even today, inside of three weeks from election day, most of us in the journalism world still think your candidacy is some sort of twisted, unfortunate gag that got way, way, way out of hand. If that’s the case, tonight should be your big reveal. Your first words during the debate should be “FOOLED YOU!” followed by a slapstick, screwball suspension of your campaign. Maybe you can follow in the footsteps of Herman Cain and use cartoon song lyrics to close out the show? “It seems today that all we see is violence in movies and sex on TV. But where are those good old-fashioned values on which we used to rely?”

7. Pretend someone hypnotized you prior to the debate. America really wants to see you walk around stage quacking like a duck and dancing the Macarena. Make your trigger words “Email,” “rigged,” and “Bill Clinton” and you’ll not make it more than five minutes without entertaining the nation.

8. Make a big boxer-esque debate entrance, like prize fighters used to do in the 1990’s and 2000’s. Come out five minutes late with a rapper leading in your entourage, jumping up and down and smashing your fists together while pyrotechnics explode all around you. I know it’s pretty short-notice to get all of that stuff organized, but aren’t you always bragging about how many billions of dollars you have? This might be the first time in your life you’ll ever put any of that money to good use. Speaking of money…

9. Buy everyone in the audience a new car. You can do it Oprah-style, with car keys under everyone’s seats. None of the people in the audience would vote for you even after that, but hey, it’ll make for some good television, and if you wait for it and time it out perfectly, you can use it as a distraction when someone asks you about your tax returns, or your numerous groping scandals, or whatever racist bullshit you posted on Twitter in the past hour.

10. Ask Alec Baldwin to sub for you. We all know you aren’t a big fan of Alec Baldwin’s SNL parodies of you, but you’re probably the only person in America who doesn’t think his impression is dead-on. The sad part is, if you had Alec Baldwin replace you during tonight’s debate, and if everyone participating — Baldwin, Hillary Clinton, and the moderators — all did it totally deadpan, you’d probably actually get a bump in the polls.

That’s right… a comedy actor pretending to be him is actually easier to take seriously than Donald Trump himself. Welcome to the 2016 presidential race, folks.