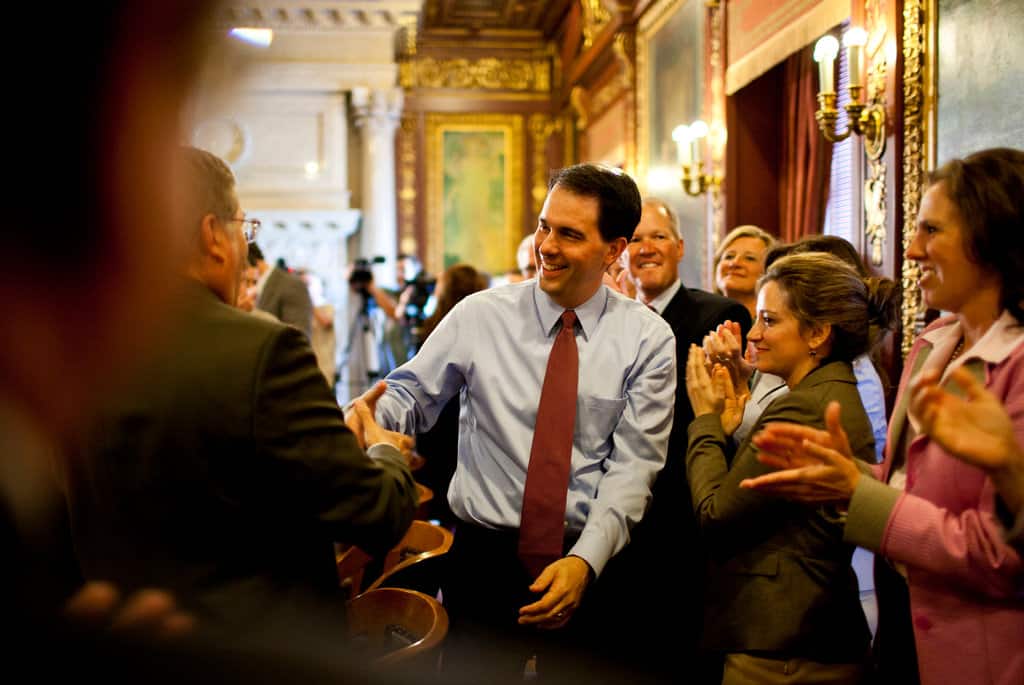 How do you prevent Democrats from winning elections? This is a question many a Republican has asked themselves in recent years. For some, gerrymandering does the trick. For others, it’s draconian voter ID laws. But for Wisconsin Governor Scott Walker, that simply isn’t enough. He’d rather take down Democrats at their source, making it nearly impossible for them to fund their campaigns. For Scott Walker, it’s all about union-busting.

In a scheduled appearance in Las Vegas on Monday, Walker detailed his plans for bringing about an end to unions, which would include prohibiting all federal employees from joining unions, implementing “right-to-work” policies at the national level, and more.

Scott Walker’s anti-union rhetoric is fueled, at least publicly, by the completely unfounded notions that unions are restrictive to the economy and limit job creation. “To grow the economy at a higher rate requires a comprehensive approach and reform of the labor unions is a key part of that plan,” Walker said, according to an advanced copy of his planned speech acquired by the New York Times.

Walker doesn’t want to merely restrict access to unions or strip away the rights of workers, but do away with unions altogether. To quote Clark University Labor Relations Professor Gary Chaison, “He not only goes after the unions’ role in collective bargaining, but after the unions as institutions.”

Who would benefit the most from Walker’s anti-union policies? It’s safe to say that the big-money industrialists funding his campaign, most notably the Koch Brothers, stand to gain not only financially  from the weakening of labor unions, with workers unable to collectively bargain, but also politically, as unions tend to financially support Democratic candidates as the only noteworthy competition to the corporate-funded super-PACs of the GOP.

Is Scott Walker Little More Than A Marionette, Tugged Around By A Sinister Koch Geppetto?

As was explained in detail in the documentary Citizen Koch, Scott Walker’s relationship with the Koch Brothers has been questionable for many years, and his focus on eliminating unions and stripping away rights from American workers seems to play into that relationship a little too neatly. So you have to ask yourself: is Scott Walker running because he has a vision for America’s future? Or is Scott Walker little more than a marionette, tugged around by a sinister Koch Geppetto and campaigning purely with their best interests at heart? The answer seems pretty obvious, and I don’t think I’m alone in assuming that, either.