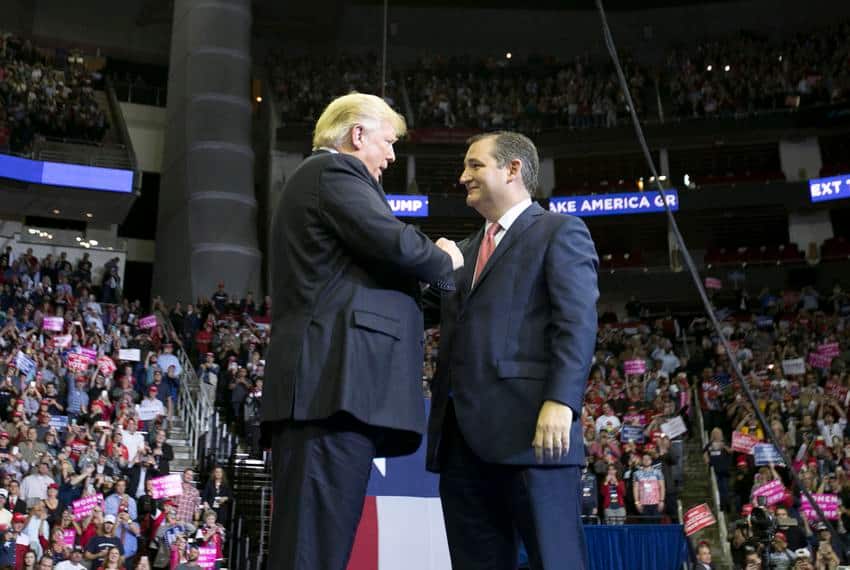 What do you do when your political ideology is under fire for provoking and encouraging domestic terror? You’d think most people would want to take a step back and spend some time soul-searching and wondering if perhaps they’ve taken things too far, right?

Well, not Ted Cruz. When presented with an ultimatum in how to respond to a terrorist attack at a Planned Parenthood facility in Colorado, Cruz decided that dialing back the dangerous rhetoric and walking back the hate speech that incited said attack wasn’t something he could picture himself doing. Instead, he’s doubling-down on stupid. And in the process, he’s saying things that are crazy enough to make Donald Trump blush.

In the past few days alone, Ted Cruz has made a number of remarkably silly comments, each one a lie wrapped in ignorance and tied with a bow of unbridled hate. It’s as if America cried out, “please, don’t say anything stupid for a while, we desperately need a rest,” and Cruz responded with “What? You want me to be the most offensive douchebag imaginable and try to turn everything around so that the whole thing is the fault of liberals somehow? Sure, I can do that!”

This week, Cruz defended the terrorist’s motive, doubling-down on the myth that Planned Parenthood “sells baby parts.” He also claimed that Democrats are waging a “war on women” by promoting the use of contraceptives, as ridiculous as that phrase even sounds, mocking what he says is the “completely made-up threat” of the “condom police.” And if that wasn’t absurd enough for you, Cruz claimed last evening that most violent criminals are Democrats.

And then we come to the crème de la crème of ignorance, and what I consider to be one of Ted Cruz’s crowning achievements as a radical right-wing loon: On Sunday, Cruz completely lied about terrorist Robert Dear, repeating completely made-up nonsense culled from only the finest of mouth-breather right-wing conspiracy websites:

While criticizing what he calls “vicious rhetoric on the left blaming those who are pro-life,” Cruz claimed “it’s also been reported that [Dear] was registered as an independent and a woman and a transgendered leftist activist, if that’s what he is.”


How much of Ted Cruz’s statement from Sunday is true? Exactly none of it. Robert Dear has been identified repeatedly by those who know him as a devout Christian and a serious conservative, who hangs up crosses on his property and hands out anti-Obama propaganda in the form of leaflets within a few minutes of meeting someone new. There’s no evidence whatsoever that he identifies as transgender, not that his sexual identity would in any way indicate his political leanings whatsoever. (Caitlyn Jenner, for the record, is a Republican.)

Ted Cruz Tells One Radical, Hate-Inciting Lie After The Next

Maybe we shouldn’t be all too surprised by Ted Cruz’s hateful rhetoric. After all, Cruz does pal around with terrorists, accepting endorsements from radical pro-life extremists, and recently formed a “national prayer team” in an effort to prove he loves Jesus more than anyone else. Cruz needs these extremists if he ever hopes to win the nomination, and seeing as how he was born in Canada, Ted Cruz is going to need all the help he can get.

Let’s not sugar-coat this: The right-wing is fully culpable in Robert Dear’s terror attack in Colorado. They weren’t holding the gun, but they certainly loaded it with bullets; their hate-fueled smear campaign targeting Planned Parenthood with relentless salvos of lies, fear-mongering, and calls for right-wing Jihad led directly to Robert Dear carrying out the very terror attack they indirectly demanded. In a just world, Carly Fiorina, Mike Huckabee, and yes, Ted Cruz, would all be indicted for conspiracy to commit acts of terror.

And today, in the wake of this horrible terror attack, Ted Cruz says one radical, hate-inciting lie after the next, stoking the dangerous fires of fundamentalism while reassuring terrorists that no matter how evil their acts are, Cruz himself will say or do whatever it takes to pin the blame on their opposition, like a member of Al Qaeda or DAESH, (formerly known as ISIS), claiming the victims of terror inspired it themselves.

Ted Cruz is no longer campaigning to be the President of the United States, but the Caliph of the American Mujahedeen. He’s responding to an act of terror by indirectly calling for more terror, either targeting Planned Parenthood, or liberals, or anyone who backs either, which makes him a terrorist himself. And yes, Mr. Cruz, before you ask, I’m perfectly willing to say that directly to your face.