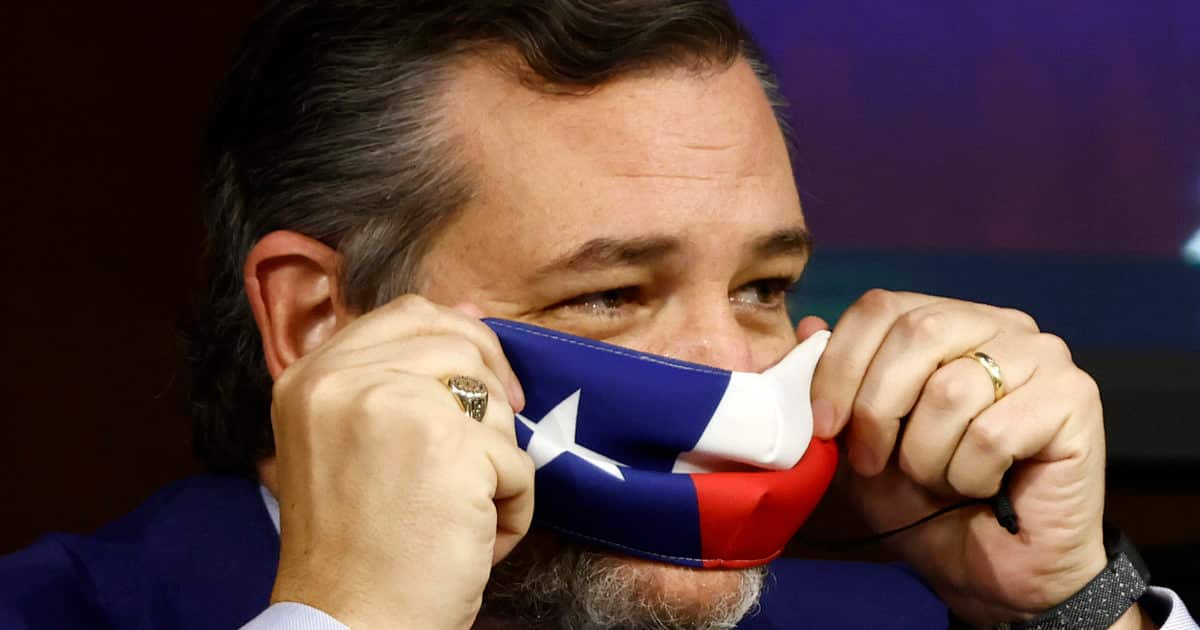 A Ted Cruz sex scandal? Sensible folks remain skeptical because this would involve people actually having sex with Ted Cruz . The rest of us are busy blowing up Twitter with the #CruzSexScandal hashtag.

It all started on Wednesday when The National Enquirer hit newsstands and supermarket checkouts across America with an article that claims they caught “Pervy Ted Cruz” cheating with five “secret mistresses!” This Ted Cruz sex scandal was likely made up out of whole cloth by Donald Trump and his evil minions. And come on … It’s the National Enquirer, for Pete’s sake. Yet they’ve been proven right enough times (remember Jonathan Edwards, Tiger Woods, and Gary Hart?) that even the more conservative-leaning of the big news outlets are reluctant to cry foul or leap to Ted Cruz’s defense.

Here’s the banner from the National Enquirer‘s cover.

And here’s a photo of the two-page spread:

The Enquirer article shows five barely disguised photos of Ted Cruz’s alleged hookups, three of whom have been identified as Carly Fiorina’s deputy campaign manager Sarah Isgur Flores, Donald Trump spokeswoman Katrina Pierson, and former Ted Cruz staffer Amanda Carpenter. “The hooker” and “the teacher” mentioned in the article have yet to be named.

This is all hard to believe, yet the Washington Times‘ Drew Johnson insists the report is accurate for two of the women whose photos were shown in the National Enquirer article.

It’s hard to imagine any of the above women engaged in torrid affairs with the creepy Cruzter, they all seem to be way out of his league. So far, Katrina Pierson has said nothing, although a Trump supporter on Reddit mentions that she just made her Instagram account private. Sarah Isgur Flores also remains silent, though the Ted Cruz sex scandal sheds a whole new light on that $500,000 his campaign bizarrely contributed to her boss Carly Fiorina’s. As for Amanda Carpenter, she took to CNN to angrily denounce the rumors as “tabloid trash.”

Fanning the flames of the alleged Ted Cruz sex scandal is a heavily-redacted 2005 police report from Austin, TX. A distraught Heidi Cruz was found sitting on the grass by a highway onramp with her head in her hands. The police report states that Ted Cruz’s wife told her she was feeling suicidal and had felt depressed for the past three weeks. The officer felt she was a danger to herself and possibly wanted to take her to a hospital (it’s hard to tell because that part was redacted), but Cruz refused any further assistance.

The Ted Cruz sex scandal has likely been, erm, Trumped up, yet it’s hard not to enjoy seeing the smug and self-righteous supporter of cruel and misguided policies brought low.

Checking Twitter to see that #cruzsexscandal is trending. Thanks for the visual.

If reports of his 5 mistresses are correct, it appears Ted Cruz slept with every woman who voted for Jeb Bush#CruzSexScandal

I love that #CruzSexScandal is being called the Cuban Mistress Crisis

I love that the point everyone has to reiterate is that women were actually HUMAN women. And not something else. #CruzSexScandal

As neutral as I like to try and be politically, this one made me laugh.