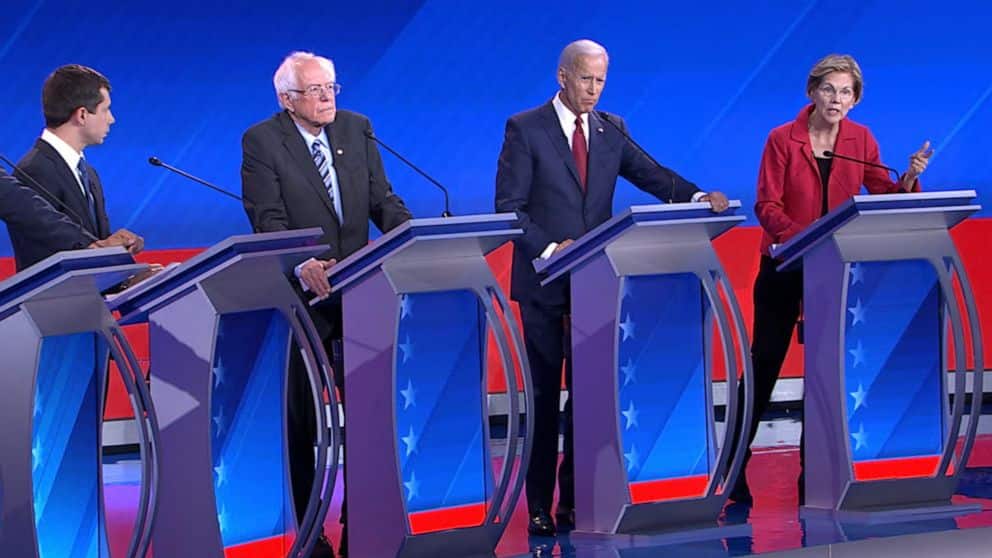 Around 11:30 pm on Saturday, excitement was building over the third Democratic debate, as the #DemDebate hashtag took the number one trending topic on Twitter with 650,000 tweets. Although pundits, liberals, and others felt frustrated with the Democratic National Committee (DNC) for having another debate on a Saturday night – the worst night to have a debate – Twitter made do. They prepared themselves to either watch the debate via cable or live stream, and needless to say, they hashtagged every minute of it.

Surprisingly, Twitter users were very engaged in the third Democratic debate, providing thoughtful and insightful feedback to the three candidates’ positions on the economy, foreign policy, terrorism, immigration, and gun control. By the end of the night, it was clear Twitter commentators were more impressed with the third Democratic debate than with any Republican debate.

But can we take a minute to admire and applaud the fact that the #DemDebate was a real and intelligent debate with a range of real issues.

Bernie Sanders Apologizes To Hillary Clinton For Data Breach, And She Accepts.

The third Democratic debate began with addressing the controversy between Vermont Sen. Bernie Sanders and the Democratic National Committee after they suspended Sanders’ team from access to voter information over a data breach. Because this is a Democratic debate with real adults, Sanders apologized to Secretary Hillary Clinton and his supporters for the unethical behavior of one of his staff members (now terminated) who accessed confidential Clinton campaign information on an open firewall.

“Yes, I apologize,” said Sanders. “Not only — not only do I apologize to Secretary Clinton — and I hope we can work together on an independent investigation from day one — I want to apologize to my supporters. This is not the type of campaign that we run.”

“And if I find anybody else involved in this, they will also be fired.”

Bernie Sanders also requested that an independent investigation be held to determine the security risks in the DNC’s system and to assure him that his campaign’s confidential information was not leaked to Hillary Clinton’s staffers either.

“…I work — look forward to working with Secretary Clinton for an investigation, an independent investigation, about all of the breaches that have occurred from day one in this campaign, because I am not convinced that information from our campaign may not have ended up in her campaign. Don’t know that.”

“But we need an independent investigation, and I hope Secretary Clinton will agree with me for the need of that.”

And, because the third Democratic debate includes only mature adults, Hillary Clinton accepted Bernie Sanders’ apology. After the apology, Sanders took the time to address the lawsuit his campaign filed against the DNC, without bashing his opponent.

“…what I have a really problem, and as you mentioned – this is a problem, I recognize it as a problem. But what the DNC did arbitrarily without discussing it with us is shut off our access to our information crippling our campaign,” said Sanders.

Ole Bernie went in last night at the #DemDebate

Unlike the DNC President Debbie Wasserman-Schultz  or the GOP, Sanders and Clinton behaved like adults, addressed a critical and controversial matter, and did so swiftly. People on Twitter agreed with this tactic, and very much appreciated the candidates’ choice not to partake in back and forth insults, name-calling, and blame.

Third Democratic Debate Moves On To Domestic And International Terrorism.

In the third Democratic debate, each candidate was asked to provide specifics on how to address the rise of international and domestic terrorism, especially the threat of DAESH (ISIS). Clinton’s plan consist of three items:

The former governor of Maryland Martin O’Malley supports building a coalition and was morehawkish in his aggression to wipe-out DAESH. Sanders offered a more isolationist plan, much like Kentucky Sen. Rand Paul. Though Sanders is on board to eviscerate DAESH. At the same time Sanders acknowledges our military plan of removing dictators has done the opposite effect of building democracy; instead, it has created more chaos and has allowed the opportunity for worst dictators to rise in power.

“I do not believe in unilateral American action. I believe in action in which we put together a strong coalition of forces, major powers, and the Muslim nations. I think one of the heroes in a real quagmire out there, in a dangerous and difficult world; one of the heroes who we should recognize in the Middle East is King Abdullah II of Jordan. This small country has welcomed in many refugees,” said Sanders.

There’s one thing all three candidates agreed on during the third Democratic debate: Their outrage against Donald Trump’s hateful, anti-muslim politics. Clinton eviscerated Trump’s rhetoric for wanting to ban Muslims from the country. Clinton attests this only flames the fire for DAESH:

“I worry greatly that the rhetoric coming from the Republicans, particularly Donald Trump, is sending a message to Muslims here in the United States and literally around the world that there is a “clash of civilizations,” that there is some kind of Western plot or even “war against Islam,” which then I believe fans the flames of radicalization.”

“And Mr. Trump has a great capacity to use bluster and bigotry to inflame people and to make think there are easy answers to very complex questions.”

Martin O’Malley boasted proudly of his record on gun control while governor of Maryland and he vowed he would continue to do so if he were elected president.

“Secretary Clinton changes her position on this every election year, it seems, having one position in 2000 and then campaigning against President Obama and saying we don’t need federal standards.”

“Look, what we need on this issue is not more polls. We need more principle. When ISIL does training videos that say the easiest way to get a combat assault weapon in the United States of America is at a gun show, then we should all be waking up. We need comprehensive gun safety legislation and a ban on assault weapons.”

To which Bernie Sanders snapped back, “do not tell me that I have not shown courage in standing up to the gun people.” This may have been the most heated moment in the third Democratic debate.

Mark McKinnon once said, “Debates require a lot of hard work and preparation. If you try to wing it, it shows.” But you wouldn’t know that from watching the Republican debate, where candidates like Ben Carson gave two thumbs-up to barbaric actions of dropping bombs on innocent people, like Muslim children, in order kill the “bad guys.”

In contrast, the third Democratic debate offered candidates with solid policy plans that did not include glib excuses to commit war crimes. Unlike the Republicans, Democrats did not spend their time bashing a religious groupto curry favor with their base and to appease their rich donors. In fact, all three Democrats took the unpopular position – we must take a step back and assess, instead of repeating the same failed policy that would guarantee World War III -– which the GOP craves.

The Democratic candidates also offered specific and well-thought out economic policies. Clinton would not raise taxes on the middle class but would for citizens making 250,000 a year or more. Sanders and O’Malley said taxes need to be raised slightly to maintain social programs.

While on the subject of taxes…

The best line of the night came when the moderator asked the candidates whether Corporate America would “love” them. Hillary Clinton laughed and declared, “everyone should [love me],” while Bernie Sanders bluntly declared, “no, I think they won’t,” and explained why he’s perfectly okay with this.

Twitter users did not hold back; they loved the third Democratic debate. At the end of the day, substance won. It was a good weekend for The Democratic Party!