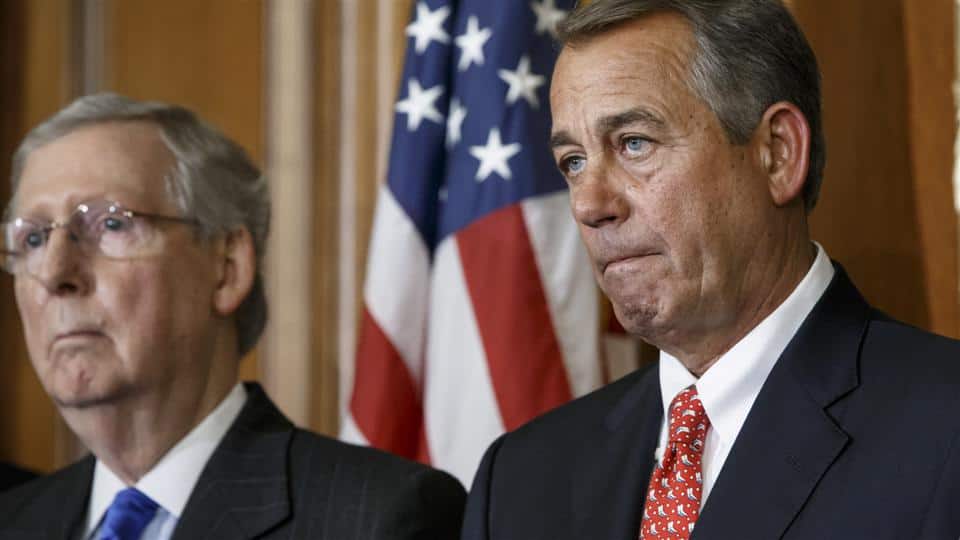 House Speaker John Boehner announced his resignation today, claiming he’s wanted to resign for years and that he decided “today is going to be the day.” But his incredibly vague, well-scripted excuse is most likely covering up the real reason why he’s resigning on October 30th, and because we weren’t satisfied with Boehner’s weepy exit speech this afternoon, we decided to come up with this list of the top ten reasons why John Boehner is actually resigning. Enjoy!

Reason #9 – He Wants to Run For President: Sure, it’s pretty late in the game to be entering the race today, but it’s not like his polling at 2 percent would be any worse off than the other 976 republicans running for president.

Reason #8 – His Kleenex Budget is Out Of control: This might just be a matter of private, household finance. Based on numbers I’m definitely pulling out of my backside, John Boehner spends approximately $9k per year on tissues. His resignation means he can reduce how often he’s shamelessly crying in public, getting his Kleenex budget down to a manageable $3k per year.

Reason #7 – Getting Yelled At Is Eating Into His Golf Schedule: People love to remark on how much golf President Obama plays, but John Boehner actually plays a lot more. It’s difficult to maintain your handicap when you spend all day getting screamed at by just about everyone you meet.

Reason #6 – His Favorite Tanning Salon Is Going Out Of Business: Perhaps the tanning salon Boehner frequents, the one that gives him his trademark leathery, basketball-like orange glow, is going out of business. He can’t maintain such a high-profile job if he can’t get the perfect tan. Appearing on camera with pale, pasty skin would be a serious let-down to his constituents.

Reason #5 – He Needs Time to Prepare For a Donald Trump Presidency: Maybe Boehner is anticipating Donald Trump winning in 2016 and becoming America’s 45th (and final) president. He wants to take the year off to build himself and his family a nice cozy bunker someplace secret.

Reason #4 – He’s Bored to Tears: Congress can be a pretty dull place, especially since this Congress doesn’t actually do anything. John Boehner has binge-watched everything of interest on Netflix. He’s built himself an epic castle and slayed the Ender Dragon in Minecraft. He finished reading the full Harlequin Romance series of novels. He’s officially out of ways to kill massive amounts of time, so a resignation is all he has left.

Reason #3 – He’s Confident With How Much Gridlock He’s Caused: It almost seems as though John Boehner intentionally caused Washington’s gridlock. I mean, nothing that f–ked up could possibly be accidental, right? So maybe this was his plan all along. Maybe he’s hanging up a “mission accomplished” sign in his office. Maybe he’s been walking around on Capitol Hill fist-pumping whenever he’s sure no one is looking. Because if his goal was to make Congress a place where nothing ever happens (borderline Talking Heads reference, you’re welcome), then boy oh boy did he do a bang-up job.

Reason #2 – Ted Cruz is a Bully: It’s possible we shouldn’t be making jokes about John Boehner. What if he’s been the victim of bullying? Don’t let Ted Cruz’s Canadian roots fool you: he’s probably a huge bully, picking on John Boehner every chance he gets. Boehner might be resigning simply to end Cruz’s torments. Gum in his locker keyhole, getting pantsed, noogies… it’s almost impossible to not imagine Ted Cruz doing that kind of stuff to John Boehner.

Reason #1 – Pope Francis Explained That You Can’t Be a Republican AND a Christian: Pope Francis may have inadvertently guilt-tripped John Boehner into resigning, explaining to him privately that the core concepts of Christianity — prioritizing the poor, giving until you have nothing left to give, not treating immigrants or anyone else as second-class people — are diametrically opposed to the philosophies of the modern Republican party, of labeling the poor as lazy freeloaders and propelling the mantra that whoever dies with the most toys wins. Maybe Boehner realized that the only way for him to get right with God was to abandon the more Godless of the two parties? Just a guess.