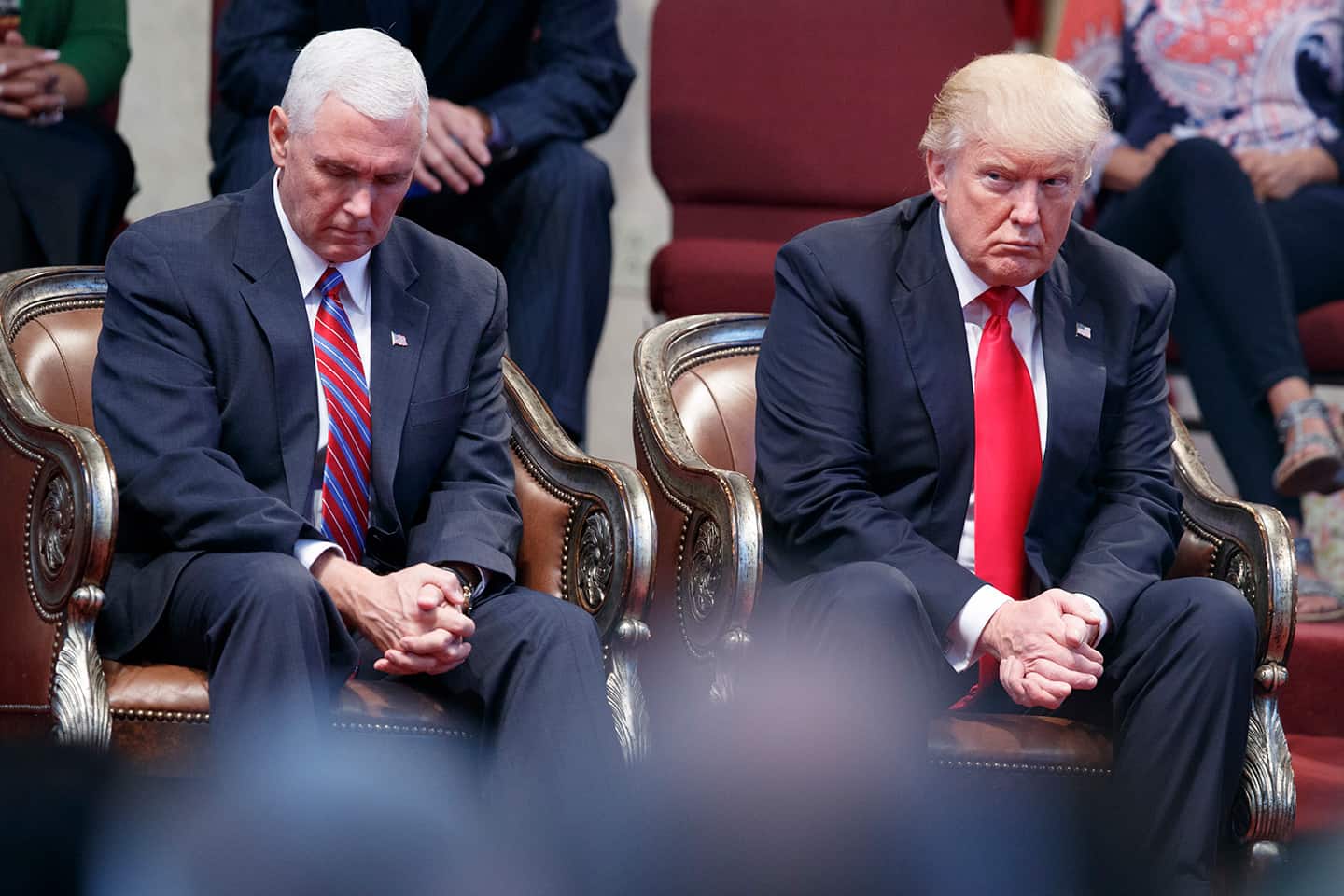 If there is one thing that Donald Trump is rather skilled at, it is making statements of such absurdity that they cause the listener to question the very foundations of reality. He outdid himself before a crowd in Sioux Center, IA on January 23rd. First he claimed that his proposed ban on Muslim immigration would have been totally non-controversial had it applied instead to Christians:

‘”If I said that about Christians, and if I said “banned,” I’m telling you I would have had less difficulty,’ Trump said Saturday. ‘And that’s pretty sad, because we’re Christians. I’m Protestant. I’m Presbyterian.’”

That right there is a steaming load of nonsense. The notion that banning all Christian immigration would be met with a collective shrug is so very wrong that I feel brain cells dying every time I read it. Trump didn’t stop there. He went on and, amazingly enough, managed to get even worse:

“‘I’m a true believer. And you’re many true believers — I hope all — is everybody a true believer in this room? I think so. But Christianity is under tremendous siege. . . ‘ ‘The power of our group of people together, I mean, if you add it up … it could be 240, 250 million. And yet we don’t exert the power that we should have. Now, I think some of the churches are afraid of their tax status, to be honest,’ he said. ‘But you know the fact is that there is nothing the politicians can do to you if you band together. You have too much power. But the Christians don’t use their power,’ Trump said. ‘We have to strengthen. Because we are getting — if you look, it’s death by a million cuts — we are getting less and less and less powerful in terms of a religion, and in terms of a force,’ he continued. ‘I’ll tell you one thing: I get elected president, we’re going to be saying “merry Christmas” again. Just remember that,’ he said. ‘And by the way, Christianity will have power, without having to form.’ He added: ‘Because if I’m there, you’re going to have plenty of power. You don’t need anybody else. You’re going to have somebody representing you very, very well. Remember that.’”

To claim, as Donald Trump does, that the Christian majority somehow lacks power, strikes me as inherently silly.

This sort of rhetoric is, of course, all too familiar. It also has fuck all to do with reality. Let’s take a brief look at some numbers. 83% of Americans identify as Christian. 92% of Congress is Christian. Every single president, over the past 227 years, has been Christian. Those are some pretty substantial majorities right there, and to claim, as Trump does, that the Christian majority somehow lacks power, strikes me as inherently silly. Hell, America has a National Day of Prayer, and if you think that the vast majority of those prayers don’t involve Jesus, you are a deeply deluded person.

I will admit, as an atheist Jew with occasional Buddhist tendencies, that I am perhaps unfamiliar with the oppression these Christians claim to experience.

So, for something like the billionth time, there is no war on Christianity. There is no war on Christmas. Christians are not subject to systematic oppression. (Though I will admit, as an atheist Jew with occasional Buddhist tendencies, that I am perhaps unfamiliar with oppression, so maybe I’m missing something.) What there is, is a small subset of American Christians who are willing to take the most minute and inconsequential things and inflate them to something on par with being fed to lions. That is why, late last year, we spent a week in deep analysis of the semiotics of Starbucks coffee cups. It is why, every holiday season, this same small subset of American Christians loses its collective shit whenever anyone says “happy holidays.”

And then there is another symptom of this whole “war on Christianity” nonsense. When good, fine, clean-living American Christians want to express their faith by imposing it on others, for some reason this is not met with an explosion of collective applause. Turns out that you don’t get to impose your religious beliefs on others. Refusing service to someone because their sexual identity contradicts some vague words in a 2000 year old book that has gone through multiple rounds of translation is not, shockingly, something that you get to do. Sorry. Go ahead and live your Christian ideals. There’s many fine things to be found in the words of Jesus. But once you start taking those ideals and demanding that others conform to them, you’ve crossed a line. And when you get slapped down for crossing that line, it isn’t a war on Christianity. Referring to it as such just makes you look petulant and ridiculous.

But by God, Donald Trump is going to fix all that. We’re going to be saying “Merry Christmas” again. Righteous Christian business owners will be able to once more refuse service to same-sex couples or Muslims or Jews or atheists or folks with too many tattoos. The horribly oppressed Christian majority will seize back their power, all under the benevolent leadership of Donald Trump, eminent theologian:

Or rather not. Once again. There is no war on Christianity. Christians do not need to “take back power.” Christians are not being oppressed. Christianity is not under siege. This is just Donald Trump, pandering and bloviating as per his usual habit. Perhaps this time he will actually suffer some consequences for his idiocy. I’m not holding my breath.